Samsung has a bunch of phones spread across a bunch of carriers, and those released in the last year or two need Marshmallow updates. Sprint has begun to roll out the latest version of Android to customers owning three of those devices: the Galaxy Note 4 and 5, plus the S6 Edge+.

The Galaxy S6 Edge+ is joining the S6 and the S6 Edge, which Sprint began sending updates to a couple of weeks ago. The software version number is G928PVPU2BPC3. The Note 5's is N920PVPU2BPC3, while the Note 4 gets N910PVPU4DPC1.

These over-the-air updates are similar across devices. Each deliver an updated TouchWiz experience with elements of Android 6.0 sprinkled throughout. All three handsets should have better battery life thanks to Doze's background tweaks. 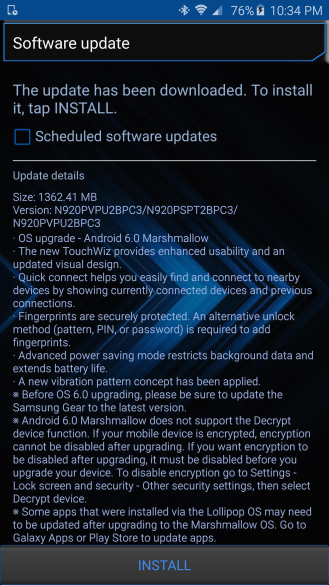 The update is going out in stages, so you may not see the goods right away. Rooted phones won't be able to apply the update in a modified state, so if you have gone down that route, you may have to get your hands dirty if you want to make the changes necessary to get the latest from Sprint.

[Deal Alert] DJI Phantom 3 On Sale For $399 On eBay, Half Its Original Price