Vizio's P-Series 4K TVs* are about to get infinitely more Google-y. The new second generation models (P-Series Ultra HD HDR Home Theater Display is the full name, but we'll gloss over that) come with Google Cast built-in, meaning a Chromecast or Cast-enabled set-top box isn't needed in order to cast over content.

There are four of them, all at different sizes and prices; 50-inch, 55-inch, 65-inch and 75-inch, ranging from $1,000 to $3,800. Note that Google Cast is different from Android TV - these TVs have no apps built-in, with all interaction being through Cast, same as when a Chromecast is plugged into a TV. Incidentally, it was rumoured only a month ago that Google was working with Vizio to make Cast-enabled TVs, which means the source was pretty on the money as far as accuracy is concerned. 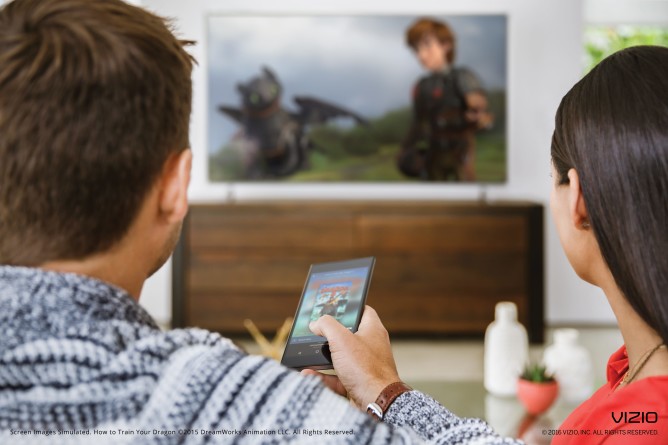 Because all four of these TVs come with Google Cast as standard, they also ship with a Vizio Android tablet, to act as a remote. It's not a hugely exciting Android tablet - a 6-inch screen, 1080p resolution, an octa core processor - but as remotes go, this is definitely one of the better examples. The tablet charges through a 'wireless' charging dock and comes pre-installed with Vizio's SmartCast app for casting purposes, although any Google Cast (formerly Chromecast) enabled device can be used. SmartCast lets you search streaming services for content, then cast it over to the TV, as long as you're subscribed to that service. Because controlling volume, channels, power, and other small things through a phone or tablet may not be preferable to some or most users, Vizio has also included a small infrared remote to manage these basic tasks. 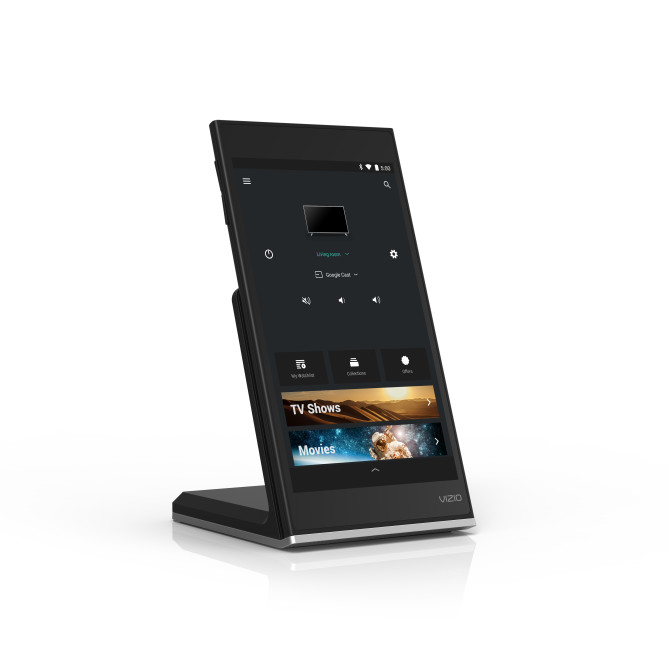 The Android tablet that serves as a remote for the TVs, in its dock

Back to the TVs: they've got an ultra-wide color spectrum, with 128 active LED zones and Dolby Vision HDR. While these terms may not mean much to you, what they achieve when put together will: inky-deep black levels and incredibly vibrant colours. There are five HDMI ports, one of which is specifically optimised for gaming, with very little input lag.

Vizio is planning to introduce more SmartCast products in the future, including speakers and soundbars. Until then, a P-Series TV is available to purchase at Vizio.com, or at participating retailers.

*Vizio does not actually refer to this product as a television, owing to its lack of a proper TV tuner. Instead, they call them Home Theater Displays. We'll stick with TV for brevity's sake for the time being.

VIZIO Debuts Next Generation Streaming Ecosystem on All-New VIZIO SmartCast™
P-Series™ Ultra HD HDR Home Theater Display™
VIZIO SmartCast Collection Features Intuitive App that Allows Users to Browse Content Across Multiple Sources
Irvine, CA — March 22, 2016 — VIZIO, Inc. announced today the launch of VIZIO SmartCast, its next generation smart entertainment ecosystem which will span displays, sound bars and standalone speakers. VIZIO SmartCast debuts on the all-new P-Series Ultra HD HDR Home Theater Display collection, the first Ultra HD and High Dynamic Range offerings to fully integrate Google Cast technology. The displays are controlled by the VIZIO SmartCast app that comes preinstalled on the included 6” 1080p Android™ Tablet Remote. P-Series marries its intuitive smart features with unmatched picture quality technologies that were first brought to market on the VIZIO Reference Series. Available now, the collection starts at an MSRP of $999.99 for the 50” class size.
The VIZIO SmartCast app turns every mobile device screen into a remote control and represents a paradigm shift in content discovery. Instead of jumping between apps, VIZIO SmartCast allows users to search and browse content first by genre across multiple apps at once, then select the app or source to play the content. The app also simplifies on-screen navigation. Rather than struggling to see and adjust settings or navigate apps from across the room, VIZIO SmartCast users gain access to all menus and playback controls through the app. With the VIZIO SmartCast app available for download on iOS and Android devices, consumers will never have to deal with a lost remote again.
“The VIZIO SmartCast app, pre-installed on the P-Series Tablet Remote, finally brings home entertainment into the mobile era with advanced navigation, search and control of content sources,” said Matt McRae, Chief Technology Officer, VIZIO. “We’re excited to debut the P-Series collection, which not only sets a new benchmark with picture quality technologies like High Dynamic Range and Ultra Color Spectrum™, but is also the world’s first display to fully integrate the Google Cast protocol.”
The VIZIO SmartCast P-Series Ultra HD HDR Home Theater Display boasts the same advanced picture quality technologies first released on the 2015 VIZIO 120” and 65” Reference Series. Ultra HD featuring High Dynamic Range with Dolby Vision content support transforms the entertainment experience with dramatic imaging, incredible brightness, contrast and color that brings content to life. New release titles such as In the Heart of the Sea and Point Break continue to roll out through video-on-demand services like VUDU, which currently has more than 30 Warner Bros. titles available in the Dolby Vision format.
“We’re excited to see VIZIO cascade Dolby Vision into their P-Series collection, delivering a premium imaging experience to a broader range of consumers,” said Giles Baker, SVP, Broadcast Business Group, Dolby Laboratories. “Viewers are now just a few taps away from the vibrant color and stunning contrast that Dolby Vision brings to Hollywood content.”
In addition to High Dynamic Range, Ultra Color Spectrum provides a wider color gamut enabling impeccable accuracy in every hue and tone, allowing more realistic colors than ever before. The P-Series also features powerful Full-Array LED backlighting with up to 128 Active LED Zones® which dynamically adjust to on-screen content for deeper, richer black levels and more accurate contrast1.
Each VIZIO SmartCast P-Series Ultra HD HDR Home Theater Display includes a 6” Android Tablet Remote with a convenient wireless charging dock, putting consumers in control of their entertainment.  The tablet remote comes pre-installed with the VIZIO SmartCast app and features Full HD 1080p resolution, Android Lollipop OS, a powerful V8 octa-core processor, integrated stereo speakers and 16GB of storage, making it a great standalone tablet as well. Consumers can enjoy games and other apps, available for download from the Google Play store2, on the device.
With Google Cast built in to every VIZIO SmartCast device, consumers can access thousands of mobile apps they already know and love. By simply tapping the Cast button, consumers can easily watch content go from their mobile screen to any VIZIO SmartCast or Cast-enabled device on their home WiFi network. And with casting over WiFi, users can still multi-task on the    P-Series included tablet remote or their own mobile device without interrupting what is casting on the display.
VIZIO SmartCast makes its debut on the P-Series Ultra HD HDR Home Theater Display with additional collections and products to follow. P-Series is available now with more information and retailers available at VIZIO.com.
VIZIO SmartCast™ 50” P-Series™ Ultra HD HDR Home Theater Display™ (P50-C1) MSRP $999.99
VIZIO SmartCast™ 55” P-Series™ Ultra HD HDR Home Theater Display™ (P55-C1) MSRP $1,299.99
VIZIO SmartCast™ 65” P-Series™ Ultra HD HDR Home Theater Display™ (P65-C1) MSRP $1,999.99
VIZIO SmartCast™ 75” P-Series™ Ultra HD HDR Home Theater Display™ (P75-C1) MSRP $3,799.99
1 Compared to Edge-Lit sets
2 The third party applications and content described herein may only be available in certain countries and languages, may require additional fees or subscription charges, and may be subject to future updates, modifications, interruption and/or discontinuation of service without notice, and VIZIO has no control over such content.  Google account required to download apps from the Google Play store.