For that, you have a couple of choices: use roughly every outlet in the house to charge stuff, or — probably the better option — get a charging station. I've reviewed a couple of different charging stations in the past, but I was especially interested in TYLT's Energi Charging Station ($80) because of the compact design and removable 3,200 mAh battery pack — such a great idea. The company started the project on Indiegogo, where it did very well, and now it's out for the masses.

So here's the quick and dirty: it's a five-port charging dock, with each port supplying 5 volts at 2.4 amps. That's pretty common for modern devices, so it charges at a reasonable speed. Keep in mind that it's not a Qualcomm Quick Charge-compatible dock, so don't expect stupid-fast speeds here. It's just a "regular" charger, but it does a good job of being one.

Aesthetically, it's actually a more unique dock than I'm used to seeing. It doesn't have "slots" or "trays" for devices to rest on while charging, which means a couple of things: it has a smaller footprint than most others, but it's also not as organized. It does, however, have some small cable management routing along the top, which works well enough for one or two devices. If you're charging more than a couple of things at once, however, you'll have to deal with cables lying around all over the place. The Energi Charging Station doesn't come with any cables of its own, so I definitely suggest investing in some shorter cables — probably 12-inches or so if you don't plan on using the phone while it's charging. I wouldn't use anything longer than three-feet long cables at any point, though.

The last port on the charger is one of the more unique features of this unit because it's also a removable 3,200 mAh battery pack. While it's in the dock, it works just like any of the other charging ports, and the dock also keeps the pack charged up. There's a small, four-LED indicator on the right side of the pack to let you know how much juice it currently has, and it can also be charged via the microUSB port while away from the dock. So really, it's a full-featured battery pack when being used as a standalone device, but it also serves as an additional port of sorts when docked. That's really good design.

The battery pack can easily be removed with the small button on the rightmost part of the dock's front, and it's equally as easy to insert. There's an arrow on top of the pack to show which way it goes into the dock, but it's also slotted on the right side so it's basically impossible to incorrectly insert it without using excessive force. If you have to push, you're doing it wrong.

Overall, I think the Energi Charging Station is a good dock if you have a handful of devices that constantly need to be charged. The lack of any real cable management is sort of a bummer, but if you think you can deal with that or only plan on charging two or three things at once, then it's probably worth jumping on. The removable battery pack is an especially nice touch and one of the more unique features I've seen on a dock like this. Features like that come at a price, though, and at $80, it's a little on the pricier side compared to other multi-device charging docks. Still, I ultimately dig the Tylt Energi Charging Station and think it's worth a little extra coin over some of the other options out there. 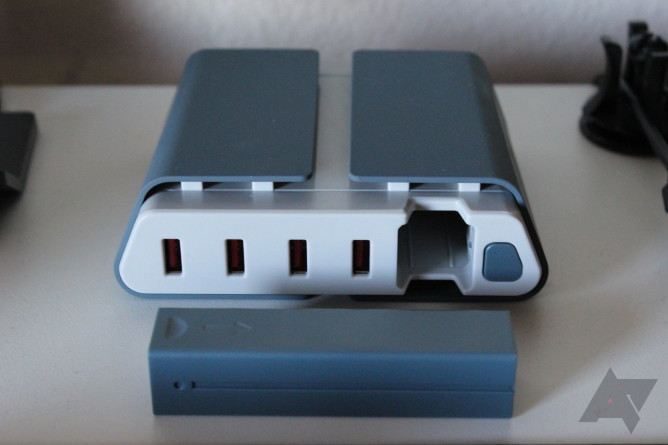