Apple copying somebody to make something successful then everybody else copying Apple's success is a well-worn narrative path (independent of that narrative's truth in reality). As such, with the unveiling of the surprisingly-powerful iPhone SE today at $399, it's very reasonable to wonder: has Apple started a small-phone renaissance? Are we going to see a flood of small (less than 4.5" display) but powerful and premium Android phones enter the market?

Let's start with some phone size history. The new Apple iPhone SE is the same size as the outgoing 5S - roughly 124mm tall, 59mm wide, and 7.6mm thick. That is a very, very small phone. You're probably thinking, "oh, I bet the Galaxy S II wasn't all that much bigger." And in some senses it wasn't (it's only a bit taller and negligibly heavier), but even that phone is over 7mm wider than an iPhone SE! A Galaxy S II, with its 4.3" display - from early 2011. While substantially taller, a brand-new Galaxy S7 is only around 3.5mm wider than that S II (plus, it's 0.6mm thinner with no strange humps), despite having a display a full 0.8" larger. In other words: aside from weight and height, a Galaxy S7 isn't hugely... more huge... than an S II, but it has gained a greatly outsized amount of display canvas relative to other dimensional growth.

And the truth of the matter is this: there really haven't been many "small" Android phones since 2012. Android phone manufacturers as a group quickly came to the realization that customers wanted phones with bigger displays than Apple would offer, and they ran with that idea for years. Let's use Samsung's Galaxy S line, the most popular line of Android phone in existence, as an example.

Today, the S7 continues on with another 5.1" screen. If there is sufficient demand to make a profitable business of small but premium phones, Samsung seems uninterested in it.

That isn't to say "mini but premium" hasn't been tried since Android phones started super-sizing, but of such devices, which have been sales successes? Sony's Z Compact series tried for years. The Z line is now dead. And the Z5 Compact wasn't all that compact, to be honest: it's slightly lighter than a Galaxy S7, a full millimeter thicker, and 5.6mm narrower. In other words, it gives you about a quarter of an inch less to grip, but gives up half an inch of display in the process. I'm not saying it's a bad phone - I've never really used one - but relative to the iPhone SE, the Z5 Compact is quite large. The Z line's replacement, the X series, goes with 5.0" displays across the board.

HTC tried the mini thing a couple of times, last with the One mini 2 (granted, it wasn't very premium at all). They, too, gave up. LG has used the "mini" moniker as well as "S" for down-market, down-sized versions of their G lineup, but these phones are budget fare and totally eschew the notion of "small but premium." Hell, there were rumors OnePlus was building a mini phone... which ended up having a 5" screen. It's no small wonder it didn't get the "mini" name after all. Xiaomi, China's most successful smartphone brand, does have the 4.7" Redmi 2 Pro/Prime, but that's a seriously cheap phone. As far as I can tell, HTC has a few sub-5" super-budget phones, the Desire 320, 520, and 526. LG hasn't announced a memorable phone with a sub-5" screen aside from the ultra-budget K4 and that weirdo Wine Smart flip phone. The only small phones that get paid much attention on the Android side these days are budget devices like the Moto E (4.5"), Alcatel Idol 3 (4.7"), or Galaxy A3 (4.7"), and even devices of those dimensions seem increasingly rare. When it comes to Android smartphones, you don't have much shopping around to do if you even want a device under 5" at the moment. In the US, I can think of a single Android phone under 5" that is officially distributed here that I'd want - the Moto E is a bit old at this point, and the Idol 3 is stuck on Android 5.0, probably forever. Samsung's A-series isn't sold here, and so Sony's Z5 Compact ($429.99 on Amazon at the moment!) is literally the only viable option I'd have.

And along comes the iPhone SE. There had been some suspicion this would just be a slightly upgraded iPhone 5S - things would be changed where necessary to keep the device modern. Nope. It's basically an iPhone 6s stuffed into a 5S chassis. Which is exactly what so many people on the internet seem to be absolutely screaming for Android OEMs to make: a flagship phone, downsized. Dramatically. The iPhone SE has the same processor as the 6s, the same camera (downgraded FFC, though), Touch ID, Apple Pay, the same sensors, and Apple even estimates it gets substantially better battery life than the standard 6s, likely owed to a reduced display resolution (granted, no 3D touch and reduced contrast ratio are trade-offs). For $399, that doesn't sound like a bad deal. And the iPhone SE really has no direct analogs in current Android phones, just phones that are sold at a similar price. 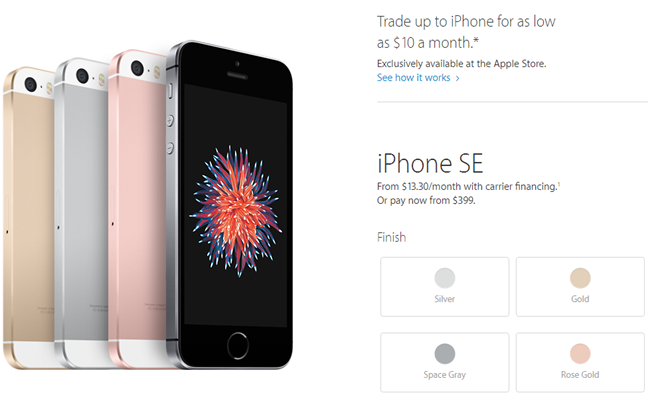 If the iPhone SE sells well, you can be all but assured someone's going to try to copy the model. After all, smartphones makers are always looking for that one corner of the market they haven't yet exploited, and perhaps truly "mini" smartphones whose only real distinguishing feature is size could be a worthwhile endeavor. The question is: are there enough people who don't want an iPhone but do want a small, high-end (or even upper-midrange) smartphone? There are, of course, some of those individuals. Perhaps sales of the iPhone SE will remind Samsung, LG, and Motorola that they exist - and enough to actually do something about winning them over as customers.