The latest update to Maps v9.22 included a respectable number of new features and improvements, but that's not all it had to show off. A teardown reveals that the developers are preparing a feature that users have been requesting for quite some time: saving routes for offline use. But that's not the only item on the teardown docket, we've also got the makings of an easter egg that might just take us back to 1979 for some disco.

Saving Routes For Offline Use

Technically, saving offline maps has been possible for quite some time, but its usefulness wasn't always...umm, useful. For a long time, you could only save a 2D map, but it was impossible to search it or use guided navigation. It did at least display saved places and a few other usable landmarks, so it could be put to some use in a pinch. Late last year, Google responded to user requests and added support for offline search and navigation in Maps.

Now it looks like Maps is about to get another improvement to its offline capabilities. Some new text in the application indicates that it will soon be able to save routes and the maps associated with them. This would be perfect for travel planning since it would be a matter of picking a starting point and a destination and Maps would take care of storing everything you need.

There's not a lot of information here, but the error messages indicate that it's possible to create and save a route, but the map may be too large to store. How useful a route is without a map is debatable, but so long as it stores the street names and GPS coordinates of each instruction, I suspect it's sufficient to get most of us to the intended destination. However, I'm not sure it would be prepared to reroute us in the event of a missed turn.

The bigger question here is probably related to map sizes. Google's recent implementation forced saved maps to hold a rectangular shape, which forced users to save large tracts of land that they may never pass through. Even more strangely, the rectangles couldn't even be reshaped, they were based on the shape and orientation of the device Maps was running on. Unfortunately, any map that spanned more than about 90 minutes of driving was doomed to weigh in at some pretty huge sizes. 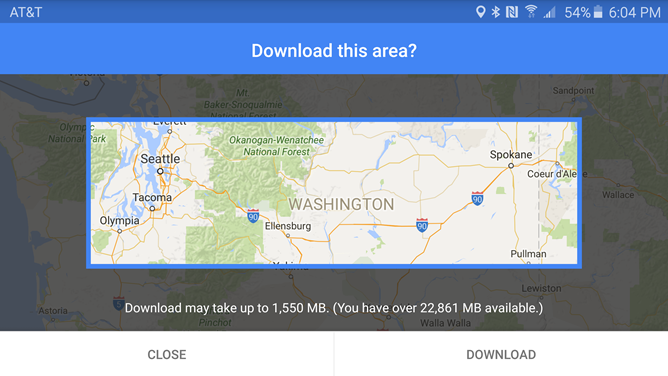 Saving way too much for a straight trip...

It's not mentioned anywhere in the strings and there are no clues to suggest a saved route will be any more efficient; but I feel comfortable speaking for a few million people when I say it would be great if offline route maps didn't include anything too far off the intended path. That would be terrific.

Most good developers have a sense of humor, and the fine people at Google certainly need one. Hey, you kinda have to get some laughs when you work in a job that involves months of tireless work to release some great new things to the public and all you get in return is a mob of angry commenters grasping for something new to complain about. This is usually how we end up with awesome little easter eggs like last year's ice cream gag.

It looks like Maps may have another cool easter egg waiting to be discovered, but finding it is proving to be a bit trickier than the last one. The new topic is all about Funky Town:

Now I can't be entirely sure, but I believe this is a reference to the 1979 hit song "Funkytown" by Lipps Inc. Oh, you're not hip to the disco scene? Neither was I. Even if the name doesn't ring a bell, there's a good chance you've heard this song before. Here, I'll save you the trouble of looking it up.

I swear we're not rickrolling with this. But I'm not so sure Google isn't...

It's possible I'm barking up the wrong tree and this is all a reference to the not-so-successful 2011 Canadian film Funkytown, but the last string listed above is a pretty good sign the easter egg has something to do with music. In fact, there's even some supporting evidence if you ask Maps the right question in the right way. Just open Maps and enter Driving Mode (from the nav drawer, tap 'Start driving'), tap the search button, then the microphone that replaces it, and finally ask, "Where is funky town?" I know a lot of people outside of the US don't have Driving Mode yet, so here's a video of the results.

In case you can't watch the video or try it yourself, Google's response will either refer to a 2013 article by NPR or a 2014 article by The Current, both of which talk extensively about the author of the song, Stephen Greenberg.

I suspect the most important detail is the location of Funky Town. Of course, if you search Google to figure out exactly which city Steven Greenberg was writing about, you'll find no less than a dozen different claims that a particular metropolitan area is "obviously" the true Funkytown–proving yet again that the Internet is not a good place to look if you want a consensus on anything.

Nevertheless, interviews with Greenberg always point out that he initially wrote the song in St. Paul-Minneapolis, Minnesota, and the lyrics specifically talk about getting out of there and moving to "a town that's right for me." Funkytown itself is a metaphor, but there seem to be two likely candidates: New York City, which many people with personal knowledge of Greenberg cite as the place he had been intending to move, and Los Angels, the then-current location of Casablanca Records, the label that had just signed him. Hey, at least this narrows it down to just three of the largest cities in the country...

Within each city, there could be hundreds of possible locations, but the MUSIC_LABEL_FUNKYTOWN string suggests this is probably about the location of Casablanca Records. Like every record label, it has changed offices a few times, but it's most famously known for its spot at 8255 Sunset Blvd., West Hollywood, California. Greenberg himself has talked about this particular location a few times, telling stories about the good times he had visiting there for interviews and parties. Casablanca Records later moved across the country to New York City. Its current office is at 156 W 56th St, New York, NY. I feel the Sunset Blvd location is more likely, but either one makes sense. On the other hand, maybe I'm way off and the easter egg is trying to send us to buy tchotchkes from the Funky Town gift shop in the East Village at 14 St Marks Pl #1, New York, NY. This is Google's easter egg, anything is possible.

Switching away from the musical reference for a moment, the other clues seem to suggest this may be speed-related because of the "moving too fast" line. There may also be a connection with Street View based on the Pegman reference–that's the name of the figure Google uses to show the direction you're facing. The "dressing up" part could also be a hint about a nightclub, fancy restaurant, or... I don't know, it just might be a clue.

I've tried using a GPS mocking tool to simulate traveling at insanely fast speeds through different areas, entering street view and tapping around too quickly, and otherwise goofing around with different locations. So far, nothing has worked. I have more ideas, but I've already sunk enough hours into looking and I'm expecting Artem is impatiently waiting for me to get caught up on some teardown posts... Oh yeah, btw, I have a few teardowns lined up for the next couple of days. ;)

Anyway, this is my research up to this point. It's now time that I give our readers a crack at breaking the code. Go forth and conquer!