Today has been pretty slow for updates, so far, but sometimes that's just how Google rolls. There is at least one notable feature from this morning's release of Photos v1.16, and it brings a neat little improvement to the built-in video player: fast forward and rewind buttons. There are also a couple of odd UI tweaks related to album sharing. A new bug also snuck into this version, so be wary. As always, we've got a link to the download at the bottom. Oh, and stay tuned for a teardown with even more stuff from this version. 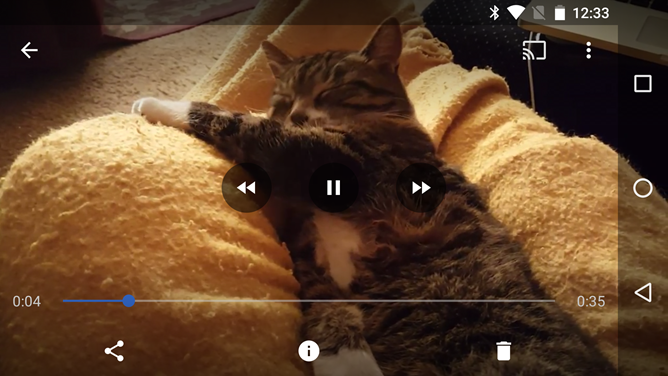 The app may be called Photos, but it handles videos, as well. The player isn't exactly feature-rich, but it's not meant to be used for much more than basic viewing and file management. The latest update adds fast forward and rewind buttons to this video player, just tap on the screen while a video is playing to make them appear.

Each button press goes either 10 seconds forward or back. That's probably not very helpful on a short video since the scrubber bar is just as effective and easier to control; but on longer videos, it might not be very precise, so the buttons will make it a bit easier to dial in on the exact target. 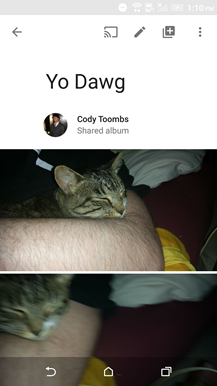 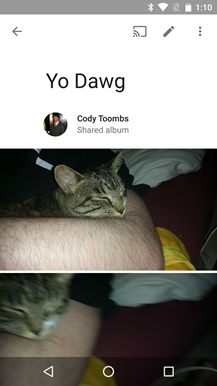 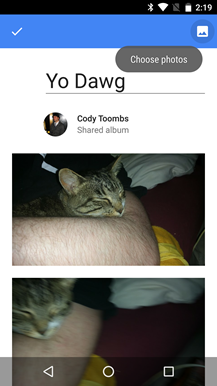 There are a couple of trivial changes to the album screen and album sharing options. Starting with the album screen: the Add Photos button has been removed. If you're looking to change the selection of photos, simply tap the edit button (looks like a pen) and hit the little button at the top right to add or remove photos. This isn't exactly a relocation of the button, because the editor has always had this button, the Photos team is just removing a redundant button from the top level page. Personally, I think the redundant button was fine there, but I suppose the button might have been removed to cut back on clutter.

If you're particularly eagle-eyed, the previous version used to have a back arrow (<–) at the top left, and now it's a checkmark. The long-press text of the Choose photos button was also updated, it used to read Add photos. 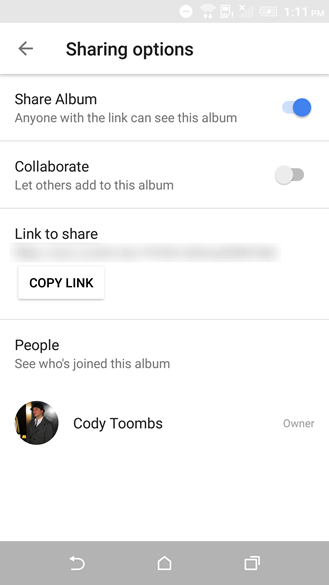 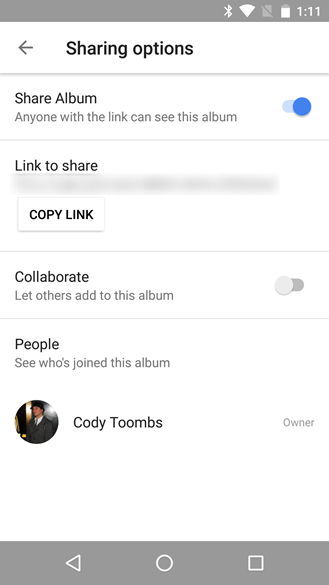 The sharing options screen was also rearranged. See how Collaborate was pushed down below the Link to share item? Interesting, right? Heh, I didn't think so, either. But we'll get a ton of tips and comments if these types of things aren't mentioned, so here they are.

We normally don't cover bugs, but this one is predictable, mostly repeatable, and likely to happen a lot until it's fixed, so I wanted to let readers know it's not happening just to them.

If you open a photo from your main stream and tap on the edit button (pen icon), the standard built-in editor should open every time. Version 1.16 introduces a bug that will cause Photos to crash if the photo is only located in cloud storage and not on the device. The workaround is rather obvious, just go to the overflow menu and choose the download option to get a local copy. Unfortunately, even after doing this, it seems like the app has to restart to properly detect this file, otherwise it will crash again. After a restart of the app (or crashing it and starting it again), everything will work fine.

If you notice this happening to you, your friends, family, neighbors, or that weird guy on the subway that always rants about the government, be kind and let them know that it's just a little bug and Google will probably push a fix in the next day or two. I've already submitted a bunch of bug reports and one short note to point out the issue, so I think the devs already know what's going on.

[Deal Alert] T-Mobile & MLB Up The Ante For T-Mobile Customers This Year With A Free ...