Every time there's a new version of Android on the horizon, there's also a rash of speculation as to what dessert Google will use for its next codename. For Android N, now in an early and promising developer preview, the situation is no different. Android fans seem stuck on "Nutella," which would mean another licensed deal like the one with the KitKat rollout, though it's at least faintly possible that Google will use the name of an Indian dessert, as CEO Sundar Pichai hinted in a question and answer session. He also said in that same session that Google might conduct an online poll for future Android codenames... and in a roundabout way, that might just be happening now. 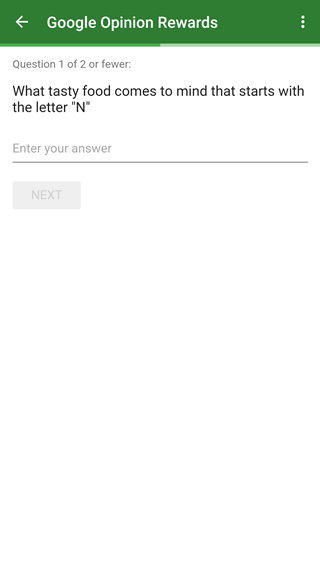 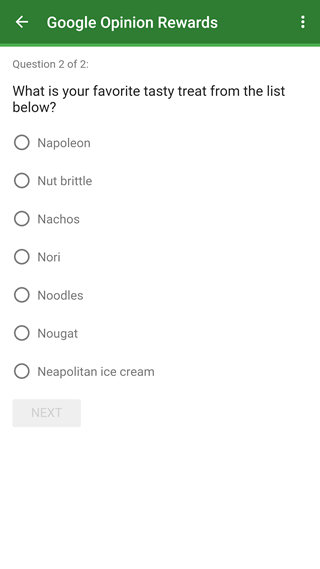 An Android Police reader sent us two questions he received in Google Opinion Rewards, the Android app that lets users earn Play Store credit in exchange for filling out consumer surveys. The first one asks the user to fill in a "tasty food" that starts with N, and the second gives a selection of "tasty treats" all starting with N. Since Google selects the questions for Opinion Rewards, it's not hard to make the connection to a possible name for the upcoming Android release.

Notably, the list of foods does not include Nutella, instead settling for nut brittle, nachos, noodles, nougat, Neapolitan ice cream (strawberry, chocolate, vanilla), and Nori, the seaweed wrap used in sushi preparation. There are no Indian foods of any kind in the list. If you're particularly passionate about your N codename, you can install Opinion Rewards and hope the question comes up for you. While Opinion Rewards are targeted and somewhat unpredictable, the fact that we've seen one go out means that hundreds (and possibly thousands) of users have been asked the same question.

It's been pointed out to us that Google does open the Opinion Rewards system to other companies and individuals - pretty much anyone can pay for anonymized answers. It's possible that someone other than Google created the survey above, though it's not clear why anyone other than Google would care. Thanks Joel.

Hangouts 8.0 Can Now Record And Send Up To 1 Minute Videos*

Synology Releases An Android Client For MailPlus, A Secure Email System Hosted On A Private NAS