Connected "smart" lighting is far from a new concept, but in late-2012, Philips released the first Hue lightbulb which became the blueprint for a new category in an old market. It was no longer enough for lights to turn on at a scheduled time or with a clunky wireless remote, they had to become smarter, more efficient, more flexible, and we wanted to control them with our smartphones. But a product of this type lends itself to variations, special features, and stylistic choices beyond those of the original innovation. This brings us to the Yeelight, a Bluetooth-enabled bedside lamp with a stylish look, simple controls, and a couple of clever features to go along with it.

The Yeelight is a modern-style lamp intended to sit atop a table, bookshelf, or just about any convenient flat surface. It can be controlled either with a touch-sensitive ring and a couple of buttons on the top of the unit, or with an app on your smartphone. If you've tried out other connected lighting products with controller apps, the Yeelight app is going to feel pretty familiar. 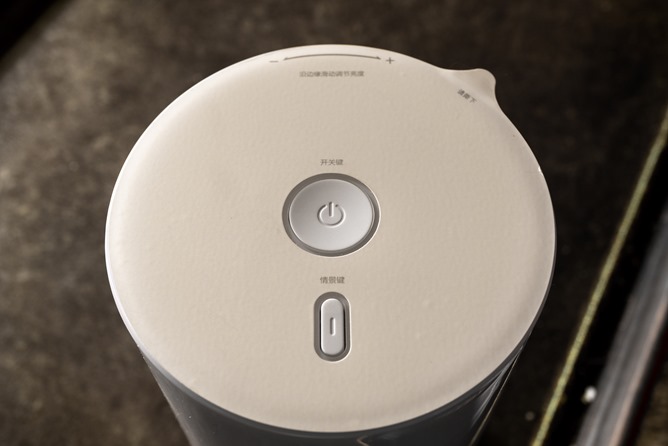 There are three modes of operation: Hue, White, and Flow. Hue and White are fairly basic–you set the color (or temperature in "White" mode) and raise or lower the brightness. If you're looking for something a little more active, Flow mode cycles through four customizable colors at a speed of your choosing. The smartphone app is the ideal way to switch between modes and control the variables of each, but just about everything (except the selection of colors in Flow mode) can be controlled with a combination of the mode-select button and touch-sensitive circle on top.

There are also some more advanced features available through the app. As you might expect, there are configurable schedules to turn the light on or off, and a Wake-up Light that starts dimmed and increases brightness over 30 minutes to gently coax sleepers to wake up. There's also a Night Mode that acts quite a bit like a touch-activated nightlight–just brush the top to turn on a dim light that won't hurt your eyes, but lit up enough to get around.

The Yeelight also integrates with the Mi Band by Xiaomi. When paired, the Yeelight can turn itself off if the Mi Band detects you've fallen asleep. I don't have a Mi Band to test this with, but I would imagine the usefulness is entirely dependent on how often you go to sleep with a light on.

The Yeelight lamp is a great example of a product that made the right sacrifices to remain affordable and still feel premium in most of the ways that matter. The body is all plastic, but it doesn't feel cheap or sound like crumby acrylic plastic. It doesn't have a ton of heft for its size like a trophy or a bookend, but there's enough weight to keep it in one place in the event of a decent bump from the side. Buttons deliver a nearly silent click, but they don't feel mushy or loose. Basically, it feels as close to premium as most of us would care about in a lamp, especially since we shouldn't even have to touch it that often.

I do have one very specific complaint about the power cable: it's too short. Well, it's probably fine if it's actually going on a nightstand; but at exactly 5 feet long, I kept pulling it taut wherever I tried to position it, especially on a medium-tall bookcase where it would have been perfect. All of the other lamps in my house have cords between 5'6" and 6'6" long, and I think even another 6" would have been enough that I'd have never noticed the length.

The LEDs deliver a great range of color and brightness, and the transitions between colors are almost perfectly seamless. While color transitions are smooth, there are some uneven shifts between color temperatures in White mode. It's not bad, but dialing in on a preferred level can be tricky. Given the temperature can range from a very warm 1700K (comparable to candlelight) to a slightly cool-neutral 6500K (comparable to overcast daylight), it's better than I expected at the price point. 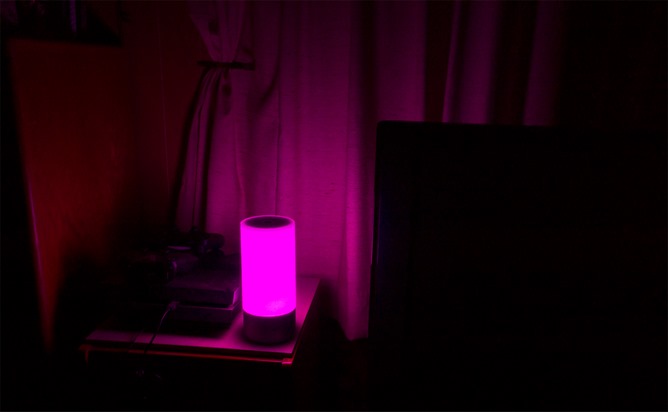 Brightness levels are tricky to explain since there's basically no way to convey in words or pictures. I suspect the Yeelight is just barely too bright to be used as a nightlight at its dimmest setting and colors. However, that could be solved by positioning it behind something like a TV or into a partially enclosed space like a cabinet with an open door. The brightest levels and colors cast enough light to see around in a room, just a bit above what you might get from a television set. It has a very romantic quality at this level. Switching to White mode with the highest color temperature and brightness is probably getting close to the output of an 80W bulb inside of a diffuser shell. It's pretty bright, but obviously not enough to fully light a medium to large room by itself.

Keep in mind that the shell around the LEDs does a great job at diffusing the light, so it's never harsh to look at directly. It can still be plenty bright, and could even serve as a makeshift desk lamp for working late.

My biggest complaint about the Yeelight comes from the setup process, and purely because it requires a Mi account. If you've ever used MIUI or purchased anything made by Xiaomi, you probably already have one, but I didn't. I'm not sure why I need to create an account with Xiaomi so I can use a Bluetooth-controlled lamp, but that's the deal. Anyway, if you can overlook this detail, the only other setup step is pairing with the Yeelight, and that only takes a few seconds. 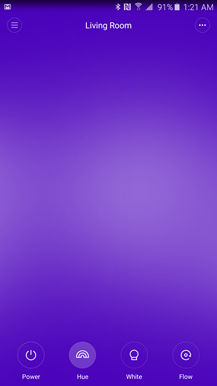 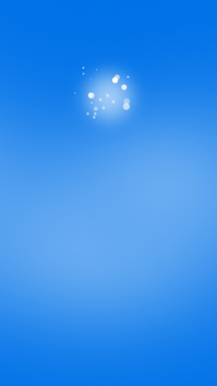 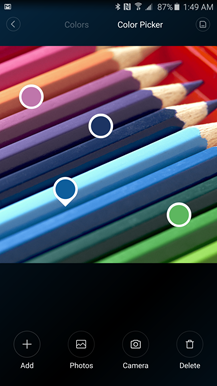 Like I said before, the controller app is pretty similar to other apps of its kind. Colors (or color temperature) and brightness are changed by dragging a finger either side-to-side or up/down on the screen, or by picking colors from a photo in Flow Mode. The interface could use a bit of polish, especially some better icons and labels, but it's simple enough that you'll know everything about it after a day or two.

I'm a little disappointed that there's no way to save color/brightness combinations for quickly loading up a favorite setting. It doesn't require a lot of effort to drag a finger around for a few seconds to get the right color and brightness, but I would have liked to always be one tap away from a bright orange for waking up in the morning or a low purple for watching a movie.

Actually, this leads to a bigger suggestion. Schedules are currently limited to turning the Yeelight on or off, it just revives itself in whatever mode it was in previously. There's no way to set colors, brightness, or mode. And on the subject of schedules, while they're fine, I think a smart scheduler based on your location would be a nice touch. Basically, it would be nice to use the sunset and sunrise times to switch the Yeelight on or off.

At least all of these features can be added in the mobile app and probably wouldn't even warrant a firmware update, so it's just up to Yeelight to implement them.

The Yeelight is limited to Bluetooth (BLE specifically), there is no Wi-Fi connectivity. The range has actually been really great. In fact, even with physical walls between me and the lamp, I've easily exceeded the range of any other Bluetooth device I've ever tested.

If you're more concerned about home automation systems, there's not much to talk about beyond Mi Band support. The market is still in flux and most systems don't offer much compatibility outside of their own first-party products. However, it's worth noting that Yeelight has published the Lamp's Bluetooth API along with their other lighting products (currently just a bulb), so anybody could add support. On that subject, there's plenty of room for app developers to hack around and get some great automation going, too.

Yeelight has a pretty good product here. The app could still use some improvements and additional functionality, but it's perfectly serviceable as it stands right now. The lamp's build quality is very nice and leaves me with basically no complaints (besides the barely too short power cord). I like having a remote-controlled light that I can turn on before carrying things into a dark room or so I don't have to get up to hit a switch while I'm laying on my couch. It's obviously not for everyone, but even I find myself surprised by how nice something like this can be in the right setting.

The lamp is currently going for $69 on Amazon (in the US and maybe elsewhere) and a reseller is offering it at $59 + $20 for worldwide shipping. There aren't very many lights on the market that offer the same combination of good design and features at this price. Philips Hue has the advantage of a big ecosystem, but an otherwise similar lamp is going to run $250 or more. There are also cheaper LED lamps that come with some combination of the same features, but I haven't seen any that rate good reviews and check all of the same boxes. If you're looking for a good wireless multi-color LED lamp at a reasonable price, it's really tough to beat the Yeelight.

For other details and ordering information, visit Yeelight.com.