Let's not beat around the bush. You know what a MicroSD card is, you know which devices can use it and which ones can't, you know some new flagships support it but don't have adoptable storage, et cetera. What you came here to see is what this card is all about and the link to get it before stock runs out as fast as Scooby-Doo from a haunted house.

SanDisk makes great MicroSD cards. This model in particular has 200GB of storage which is the most you can get from the company now. It's more than six times the size of a modern flagship's 32GB internal memory. Yes, that much. It's also fast with read speeds up to 90MB/s — you'll need that if you're transferring 200GB worth of files. It comes with an SD adapter and the whole family is super well rated at 4.6 out of 5 stars.

We've never seen its price dip below $79.99, but now it's $59.99. That is considerably cheaper, namely 25% cheaper than the cheapest. CamelCamelCamel corroborates that claim. The discount is part of Amazon's Gold Box deal of the day, which has other SanDisk products on sale like the 128GB MicroSD card for $34.99, the 128GB Dual USB/MicroUSB flash drive for $29.99, and more. 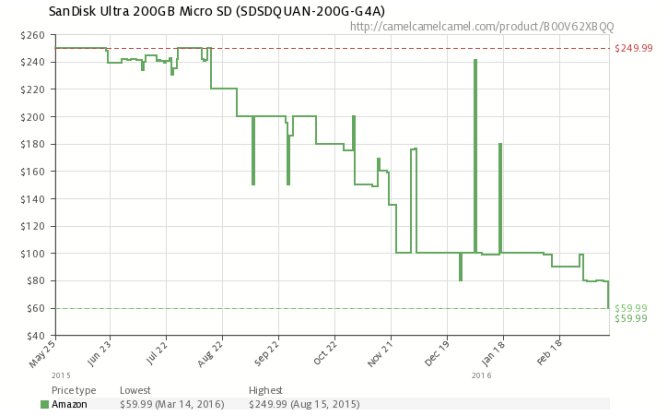 If you're looking for a MicroSD card and you know that your phone supports this capacity, this is one killer deal. I'd hurry up and grab one before they go out of stock or SanDisk decides to raise the price again. Shipping is free and is handled by Amazon.

Real LED Watchface Lights Up Your Wrist And Looks Amazing