Much like Chrome releases, Mozilla's updates for Firefox are rarely mindblowing. Instead, we get a constant stream of smaller changes that slowly but surely upgrade all aspects of the user experience. The latest beta release for Firefox, v46, falls right in line with this pattern. The highlight of the update is that the browser will display recently visited webpages even when you are offline, using data stored in cache.

You don't need to do anything in particular to get the offline webpage feature going; if Firefox has it cached, it will display instead of the typical error messages you get when trying to browse offline. An indicator will appear to let you know you are viewing a cached version. 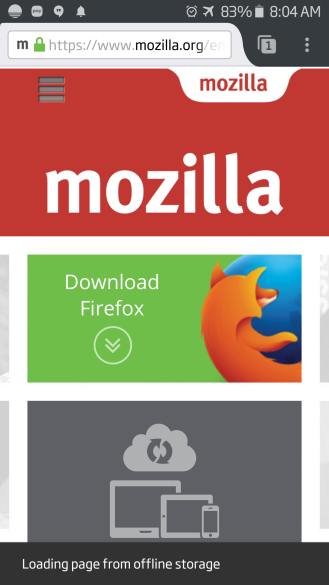 A piece of bad news for a very, very tiny slice of users: Firefox v46 ushers in the end to Android 3.x Honeycomb support. If you're in the target demographic of Firefox users with a device running Honeycomb, well, I'm sorry to bring you this news.

Here's a quick look at all the changes for v46:

The release should be on the Play Store by now, but you can always grab it on APK Mirror as well.

Tip: The Galaxy S7 (And Edge) Can Share Its Wi-Fi Connection With Other Devices, As Long As ...