Remember back in December (and January) when Packt Publishing gave away a couple free ebooks focused on Android development? The one-a-day promotion has been going strong since, but the books haven't exactly been targeted at the OS on our phones. But great news: this whole week is dedicated to mobile development!

The current freebie is all about showing love to both sides of the phone war – it's Xamarin Cross-platform Application Development. But you better hurry over and claim it, this particular book will expire in just over 5 hours. (Sorry, we saw this one a little late). 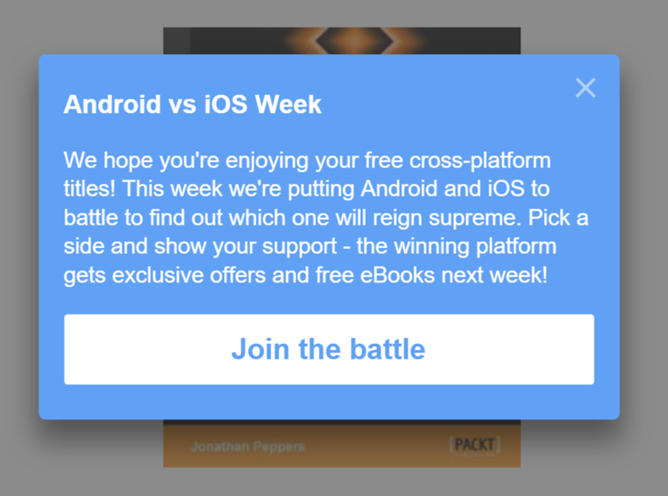 While the free book is enough reason to drop by, there's something more interesting afoot in this promotion. Packt is running a friendly competition between iOS and Android fans. For the next 2 days, Packt is calling for people to vote in a poll to determine the preferred OS. The winning OS will get a week of free eBooks and exclusive discounts.

Have you ever complained about the selection of Android apps? Then get off your butt and join in on the democratic process. Yes, I'm telling you to vote in a Twitter poll. As of this post, Android is already leading with 72% of the vote, but that's with a paltry 66 participants. Let's make this a landslide victory!

Which mobile OS do you prefer? #iOS or #Android? Are you an Apple fan or Google evangelist?

In the meantime, Packt is also selling a bunch of Android and iOS ebooks at 50% off. It can't hurt to fill out your library with some of the top tomes on the market.