We get it, some of you don't like Microsoft's apps. But there's no denying that the company has been doing a real kickass job on Android lately, updating its different applications and adding new and interesting features that either put it up to par with Google's offerings or make it leapfrog it by a few miles. I mean... did you hear that Microsoft Translator can now translate Klingon?

Well, here's a new feature that OneDrive is adding where it's just playing catch-up with Google Drive: the ability to scan a document or whiteboard and upload it directly as a PDF. The option shows up under the + FAB icon in OneDrive (image above) and opens the camera to let you take a photo before immediately uploading it as a PDF. Unfortunately, the process isn't working for me right now, and I'm not sure whether that's because I'm trying it on Android N, because it's not fully bug-free yet, or because my connection is stupidly slow sometimes. 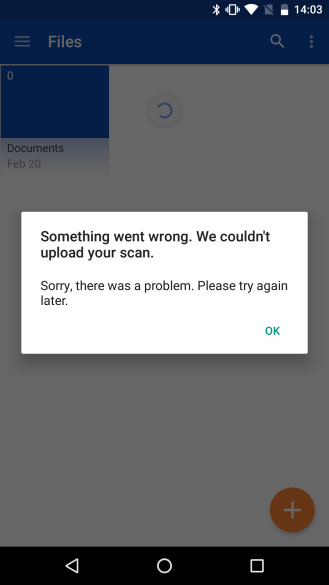 The new feature is rolling out to beta testers on the Play Store (you can enroll by joining the Google+ community and agreeing to be a tester) and it's versioned as 4.0 March Beta 2. You can also directly install it from APK Mirror.

AmpMe Adds Offline Mode Support And Auto-Join, Makes It Easier Than Ever To Stream Music Across ...