Android N is here: have you heard? Of course you have (well, maybe a bit earlier than even we expected), because the internet is freaking littered with Android N news right now. But one piece you may not have broken out amongst all the ruckus was exactly when N is launching for real (read: this summer), as opposed to a developer preview. Well, Hiroshi Lockheimer, head of Android (and Chrome OS / Chromecast) at Google, dropped a little nugget of relevant info today in a post on Medium about Android N.

Lockheimer goes over a number of things we already know, but one novel piece of information comes in the form of timing for Android N going forward. Specifically, Lockheimer says Android N will be available to OEMs in "final release" form this summer. Now, the wording here is important - "final release" means ready to ship, at least as far as Google's end of the bargain is concerned. And "summer," for those of us not seasonally inclined, provides a window of June 21st to September 21st, though I would hedge my bets in favor of the first half of that period if I were you.

In the post, titled "N, as in: so early, it's Not Named yet ;)," Lockheimer references the lack of N's formal name with a pun, saying Google is "nut tellin" what they'll be calling the new version yet. This is a joke. Hiroshi Lockheimer is not confirming that Android N will be called Nutella. Android N could be called Nutella, but this name is no more likely, in our opinion, than any other potential candidate at this point. Android version names are usually decided down the road closer to a version's official launch, so like Hiroshi says, even inside Google it's highly likely N doesn't have a name yet.

An update timeline on Google's own website indicates final release of N should occur some time in or after July in Q3 of this year. With Hiroshi's statement on the summer being the release timeframe, that narrows things down to a range of some time in July at earliest and possibly all the way up to September 21st at the latest. 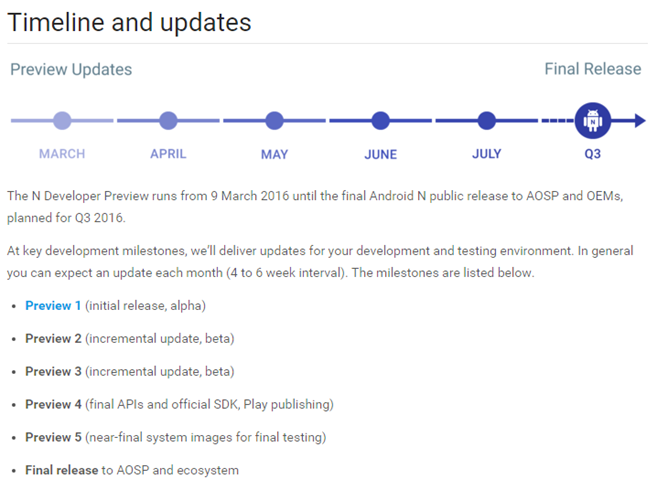