ZeroLemon, purveyor of enormous batteries and even bigger cases to the mobile masses, has another extended battery on offer. This time it's for the LG V10, the high-end phone with a weird little stock ticker screen above its primary panel. As with most of ZeroLemon's designs, it wraps around the entire phone with specific cutouts for buttons and ports. The extended battery is 9000mAh, exactly three times bigger than the V10's stock battery, and it's selling on Amazon for $60.

The V10 bucks the trend of slim and enclosed batteries in flagship phones, which means the extended battery can be attached directly to the phone's battery compartment without a pass-through port. It's still way too large to fit inside the compartment with the stock battery cover, so ZeroLemon designed a custom cover that wraps around all four of the device's edges and towards the screen. The back is made out of TPU, that grippy plastic that some phone cases are made from, and its cutouts accommodate the camera, flash module, rear buttons, and charging and headphone ports. 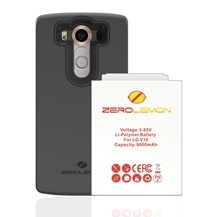 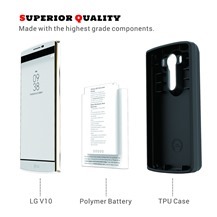 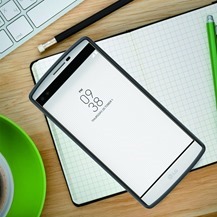 With a triple-capacity battery the V10 should be able to last at least two days, perhaps three or four with careful use. And thanks to the internal design, it's also compatible with Qualcomm's Quick Charge standard. On the downside, the larger battery cover makes the phone 17.8mm thick, a little more than double the stock phone, and it doesn't work with NFC. If that doesn't bother you, go ahead and get an order in.