When I got my first Android tablet sometime around 2012 or 2013, I turned to Tablified Market to find good tablet apps. At the time, the Play Store didn't have any way of filtering tablet-optimized apps (and it still sucks at that) and Tablified was doing a great job of curating them into categories and easy to browse lists. But despite its good content, the Tablified app was merely an HTML wrapper for the website. It was slow to load and just dreadful in terms of responsiveness (here's what it looked like). With time, I started using it less and less until the app stopped being developed around April 2014 and I let it go.

But it's back now and it's gotten quite better. Say goodbye to the HTML wrapper and hello to a native app designed with Material guidelines in mind. The signature blue color is still there and so are the different sections for Featured, Recently added, Editor's choice, Staff Picks, and more. But everything else has changed. The list of apps is easier to filter now and the app pages have a clear top section for version number, size, downloads, and other stats that you probably care about when browsing the Play Store. It all looks and works so much better than the previous app. However, you might want to hold off on trying it if you have a 7" tablet: the interface isn't optimized at all for this screen size. On my Nexus 7, the app is unusable in portrait because the left side menu and the right side padding for the floating action button take out way too much screen width, leaving nothing for the actual apps. They show up truncated and impossible to read. 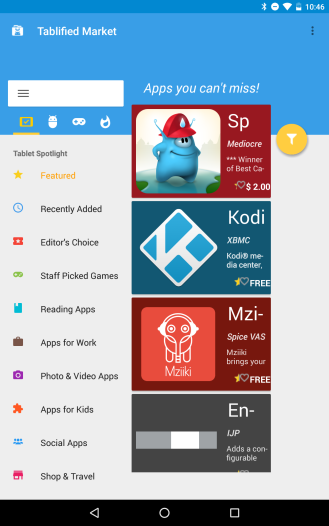 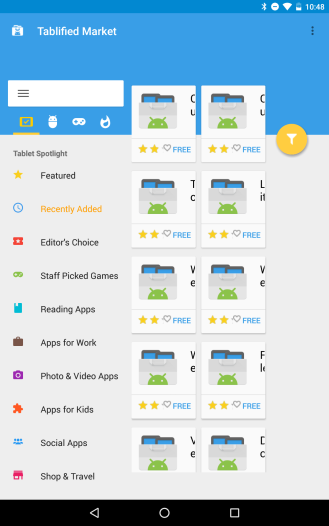 On my Nexus 7, Tablified is unusable in portrait.

In landscape, the top blue title bar is very oversized compared to the rest of the app, which leaves very little vertical room to everything else. Hopefully the developer can fix these issues soon by condensing the title bar, and making the left menu swipeable and removing the right side padding in the portrait orientation. 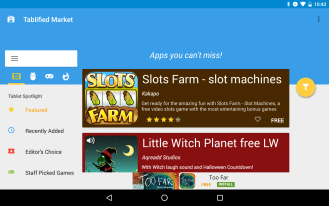 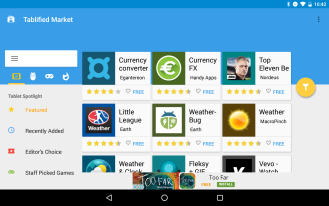 It's just a tad better in landscape, but that blue title bar is wasting too much vertical space.

Putting aside this 7" screen quirk, Tablified Market is still one of the best places you can go to find real tablet-optimized apps. If you're averse to apps that simply stretch to fill the screen with tons of wasted space and dare call themselves tablet apps, this should do the trick. It even has a submission section where you can send app suggestions to be added to the list (after reviewal by the team) and notifications for when new apps are added (which can be turned off). Tablified is free, but a $2.99 IAP removes ads and unlocks app filtering, favorites, and one-click access to the Play Store. 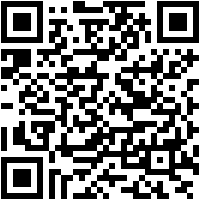 After User Backlash, Amazon Says It Will Return Encryption To Fire OS Devices This Spring