You know WhatsApp's Android developers have finished hibernating when they start throwing one build after the other like a going out of business sale. In the past couple of weeks, they unleashed the new emojis on everyone then proceeded to launch an official Play Store beta program and update the latter with miscellaneous things before starting to test the new documents sharing option. In the latest incarnations of the app between 2.12.493 and 2.12.500, a few other interface changes snuck in, one of which points to an important shift in WhatsApp's way of doing things.

First, if you're on version 2.12.498, you might notice a new message inside chat windows confirming that this chat is now end-to-end encrypted. WhatsApp has used TextSecure (from Open Whisper Systems) to encrypt messages on Android since 2014 and it seems that encryption has now been deployed to all platforms because the FAQ doesn't make any special notice of different operating systems. However, few people know that this is the case so WhatsApp is actually working on being more transparent about the implementation of end-to-end encryption in the app.

But back to this small message, we were able to spot it in group chats and in chats with ourselves. We know the latter sounds crazy, but some people actually use that as a make-do notepad or to send stuff from WhatsApp Web to their phones and vice versa. We're not sure if the message will pop up in individual chats, but for now, it's a sign that WhatsApp will start notifying users that their chats are end-to-end encrypted and explain how they can verify that. 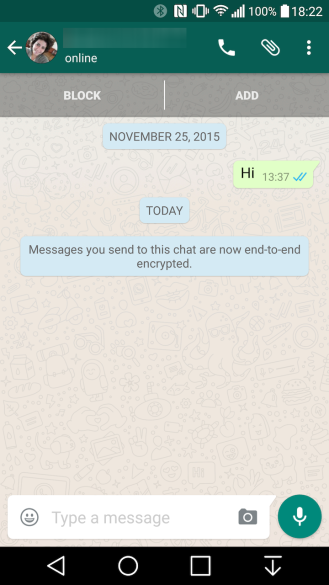 The message and the pop-up that you see at the top of the post appear to be gone in version 2.12.500 of WhatsApp so they're likely a work in progress for now and aren't even ready for beta testing.

We've all been in a situation where someone decides to share an epic tirade with us on WhatsApp. Think pages upon pages of text inside the same message. Whether it's a long joke, a news article, a Shakespearean monologue about how incompetent we are, or a boring work memo, it's incredibly annoying to scroll through this message block to see what was written before or to skip it and get to the following messages. In 2.12.493, WhatsApp truncates super long messages (they have to be really long, trust me) and shows a read more sign to expand them and read the rest. Once the full message is displayed, you'll have to leave the conversation and come back to it so it collapses again. 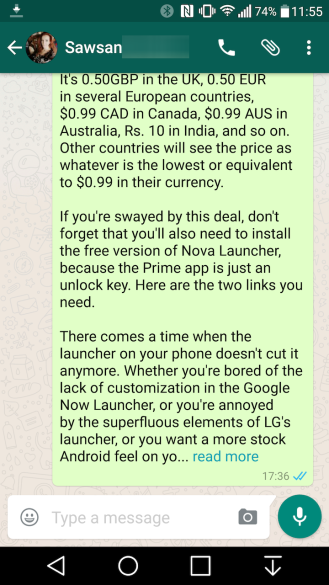 It's not the first time that the WhatsApp developers try something and decide to remove it, or they release it by mistake before it's mature enough. But a couple of changes in the profile / group info screen were spotted in version 2.12.498 that are no longer there in 2.12.500. One of them is a new Exit group icon in group chats and the other is the addition of a Starred messages item that, obviously, takes you directly to the starred messages in a specific chat instead of showing them from all conversations. That's handy and I hope it comes back in future betas of the app. For now, it's poof, gone! 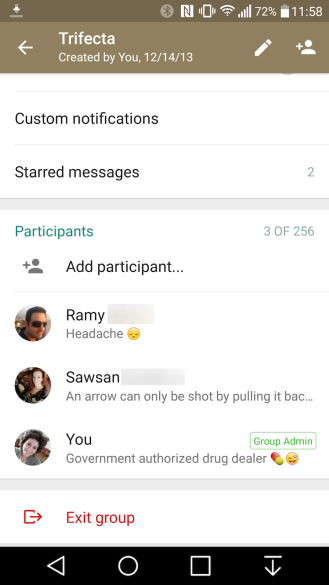 Your best bet to see all of these is to be on version 2.12.498 of WhatsApp. We'll keep an eye out for more changes as the beta updates keep rolling, but do let us know if you see any other things we might have missed.

Thursday App And Game Sales: djay 2, Today Calendar, And Many More For $1

VLC 2.0 Beta Adds Local Network Browsing And Lets You Use The Android TV Interface On Any Device