"We don’t allow apps that interfere with... other... services, including but not limited to other apps on the device, any Google service, or an authorized carrier’s network...

Here are some examples of common violations:

To be clear, this does not mark a change in policy as far as we know. It is merely the first time Google has directly acknowledged in its content policy document for the Play Store that ad blockers violate Play Store policy. Previously, if you were an ad blocker you'd just get an email pointing to section 4.4 of the old distribution agreement and pretty much nothing else. The implication was clear, but that Google never came out and said directly "ad blockers are against Play Store policy" led some to believe that maybe the policy was being misinterpreted or, perhaps, was still subject to change. Today's update to the Developer Policy Center seems to finally make clear that Google is taking a stand on ad blockers.

Well, except the most popular kind: in-browser ad blockers. Yep, Google still allows browsers with ad blocking, and even plugins for browsers that add ad blocking, on the Play Store. Brave Browser, Firefox (via plugin), Adblock Browser, and Adblock Fast for the Samsung TouchWiz browsers are all still on the Play Store right now, and have been for quite some time. 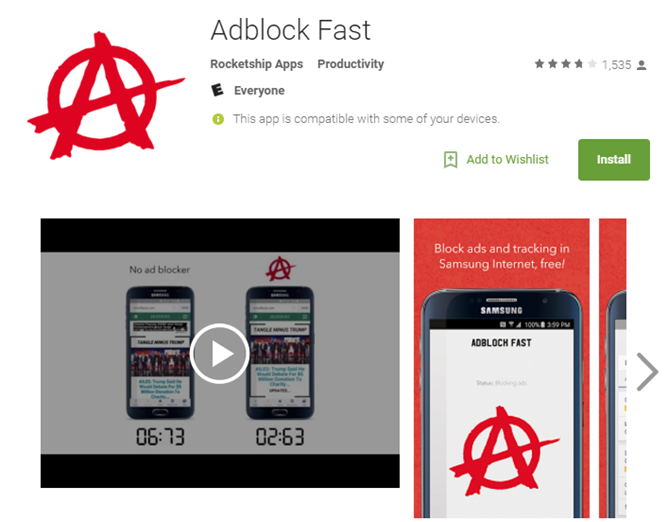 So, Google doesn't allow ad blockers, but apps that block ads inside themselves - like a browser - seem to be OK? The wording of Google's example in the new policy about blocking ads would seem to provide support to that position. "Apps that block or interfere with another app displaying ads." Why not just say "apps that block or interfere with the display of ads?" And I think therein lies Google's dirty little secret: ad blocking is OK... as long as it only occurs inside your own app. Google knows that ad-blocking browsers are popular enough that not having them on Android could hurt the platform.

Indeed, iOS 9 received scores of headlines when news that Apple was supporting Safari ad blockers broke, and that put Google, a company funded almost exclusively by web ads, in a very awkward spot. If Google took a hard stance and banned any browser that blocked ads on the Play Store, not only would they be providing Apple ample marketing ammunition, they'd also be fighting a largely futile battle. With sideloading apps being so easy on Android, pushing users who desire a very understandable feature - ad-free web browsing - to non-Play Store channels to get such an app has very visible downsides. What if it sends more people to the Amazon Appstore? What if it results in increased malware installs on Android? Better to have people getting their ad-blocking browsers from the Play Store than elsewhere.

The new policy site also features a number of other updates, most of them oriented around developers not being jerks to the users of their apps. Specifically, the following policies are new or updated.

All in all, positive changes. And a continued awkward and unstated gray area of permitted existence for ad blocking browsers.

[Deal Alert] The $80 200GB SanDisk MicroSD Card Is Back On Amazon, Along With Other Sizes

LEGO Goes Back To Its Action-Adventure Stomping Grounds With Batman: DC Super Heroes