Whether you call them UAVs (unmanned aerial vehicles), RPAs (remotely piloted aircraft), or drones, there's no denying that they are making waves. It's hard to bring up the subject without specifically talking about the DJI Phantom series. In the year since it was announced, the Phantom 3 has become the crowd favorite among photographers. Today, DJI announced the brand new Phantom 4, and it includes a boatload of improvements and new technology over earlier models.

The Phantom 4 looks a lot like its predecessors, but almost every aspect has been touched up or completely redesigned. The chassis is both stronger and lighter thanks to a new magnesium core, which should help in the event of a collision and hopefully bring up the flight time just a bit. There are also more efficient motors, which have been raised above the arms so the propellers should never appear in the camera frame. This was a common issue with the Phantom 3 while traveling at full speed, since the body tilts forward and the gimbal keeps the camera level. Most people solved this by angling the camera down, but that wasn't always conducive to a good shot.

On the subject of speed, there's also a new Sport Mode which allows the Phantom 4 to reach a top speed 44 mph, well over the 35 mph of the previous model. The maximum range has also roughly doubled to about 3.1 miles (~5km). And of course, the question everybody always asks is about battery life. Flight time on the previous model was rated at approximately 23 minutes on a full charge, but the Phantom 4 has increased this to 28 minutes–about 25% longer. Many pilots claim to get a little more than the rated numbers, usually by about 2-3 minutes, which could mean the new model is capable of a little more than 30 minutes under ideal circumstances.

While all of the numbers have improved dramatically, one of the best features of the Phantom 4 is a brand new set of sonar sensors on the front and bottom of the body. They work to prevent collisions and can identify objects at up to 50 feet from the aircraft. This might put an end to the YouTube videos of people flying directly into the side of a building or getting caught up in trees. 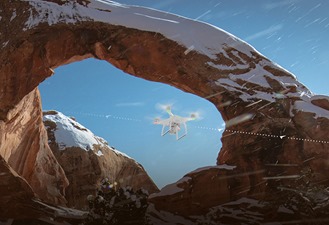 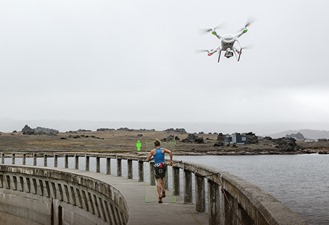 The sensors also gave DJI room to add some big new features to the Android and iOS controller apps, as well. The first new tool is called TapFly, which allows users to tap a spot on their screen and the Phantom 4 will guide itself to that location without further control from the pilot. This could take some of the hassle out of flights that required a little travel time to get to the destination. There should be no need to hold the stick forward the whole way if the functional equivalent of an autopilot can take over for the boring part.

ActiveTrak is the name of the other major new software feature. It's very similar to the Follow Me feature in the Phantom 3, but relies only on computer vision rather than beacons and trackers. An operator simply picks an object from the controller screen and the Phantom will do its best to follow the object wherever it goes–assuming it can do so safely. If you're going to be part of the action and can't spend your time wielding the controller, this is definitely the mode to check out.

Since the Phantom line is so popular with photographers, it's important to also call out improvements to the camera. The image sensor supports up to 4k resolution at 30fps, or it can drop down to 1080p and achieve up to 120 fps for slow motion effects. This is all seen through a newly designed 8-element, 20mm (35mm equivalent) f/2.8 lens system that has further cut down on chromatic aberration and distortion. The built-in gimbal has also been upgraded to cut out even more vibration and reduce the effects of sudden movements, though that wasn't really a problem on the previous model.

The Phantom 4 is available for pre-order from the DJI Store and Apple Store. It's priced at $1,399, only $150 over the regular Phantom 3 Professional price. DJI will also continue to sell the Phantom 3 line, which is currently offered with a discount on the DJI Store and a few other resellers.