Google's "Monotune" Android commercial is pretty cool. The musical analogy is interesting (and it ties in well with Google's "be together, not the same" marketing campaign), but there's an impressive technical aspect to it as well. The producers modified a grand piano so that all 88 keys were turned to middle C, so that pianist Ji-Yong Kim could really play the music using a single note. As cool as that commercial is, they might have taken things a bit too far with the latest promotion: an entire album of music played with that one-note piano. 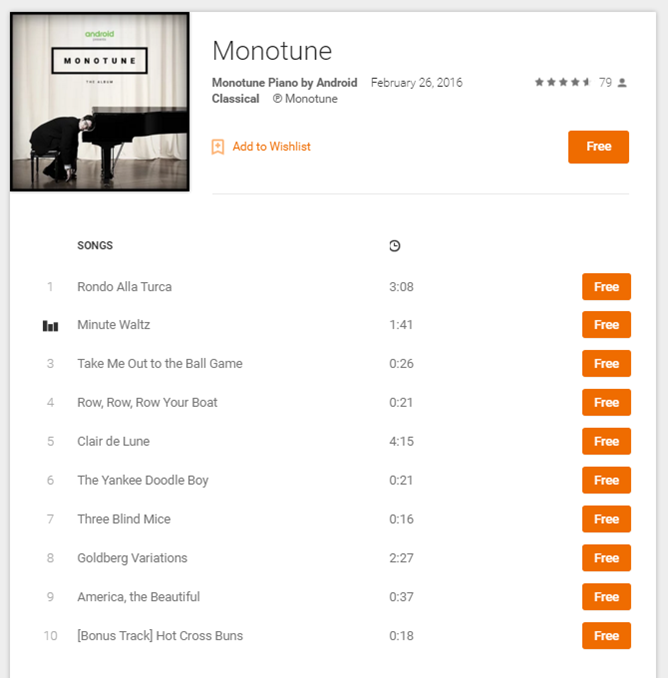 The tracks on the Monotune Piano album range from well-known classical arrangements to simple ditties like Row Row Row Your Boat. There's even a bonus track, Hot Cross Buns, a tune that every piano student learns on their first day. Some are complex, some are literally a single note at a time, but all of them are middle C, over and over again. Calling the music enjoyable wouldn't be right - it's barely even music - but it's certainly interesting.

Google has put the entire ten-track album on Google Play Music for free. That's nice, because there's no way anyone should ever pay for it. These freebie albums are usually geographically limited, but since Google is the music label here, it might just be available worldwide. As Google employee Paul Wilcox said when sharing the album to Google+, enjoy it, if you can.