Here at Android Police, we monitor a truly insane amount of sites and developers to bring you the latest apps and games fresh from the Play Store. And in serving that duty, sometimes we come across games that don't deserve any attention. More often than not, in fact, and some of the most depressing are games that exploit a beloved TV, movie, or video game license and use it to try and sling the same homogenized crap as ten thousand copycat game developers looking for a quick buck. A lot of these seem to be Candy Crush or Bejeweled clones: we passed over Pac-Man Puzzle Tour just yesterday (Artem literally wrote "ughhhhhh" in the office chat), and Star Trek: Wrath of Gems is such a shameless cash-grab that it makes trekkies spit out their Romulan ale. Neither of these games made it to our bi-weekly game roundup, even in passing.

You guys couldn't even get Billy West to do the YouTube video? It's not like he's hard to find.

And so we come to Futurama: Game of Drones. It's yet another Candy Crush copy, a clone of a clone that exists only to try to rope a few in-app purchases with a shiny license. It's only getting attention here because 1) it's using Android Police's favorite sci-fi cartoon and 2) it's a pure, perfect, plutonic example of how not to make a licensed mobile game. Let's take a look, shall we?

Game of Drones is a tile-swapping puzzle game, not that you'd know it from the terrible app description, which tellingly reveals exactly one actual gameplay shot. 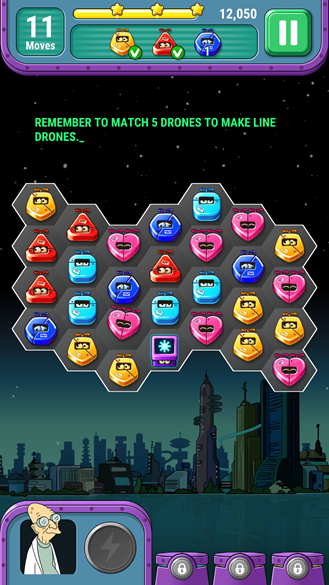 Let's start with the name. "Game of Drones" doesn't have anything to do with Futurama as a series, it's just a rather lame pun on a show that really is still running (and still relevant). Once you open the game, you're treated to static comic-book intro that re-uses jokes from the show (without even going to the trouble of getting a sound byte for Professor Farnsworth's iconic "good news everyone!"). It's just the characters setting up the Candy Crush premise - the candy/hearts/cookies/jewels/whatever are "drones" that you have to swap around and match to clear the board in a limited set of moves. Aside from the music and some re-used visual assets, there's barely anything here to tell you you're playing in the wide and deep Futurama universe. 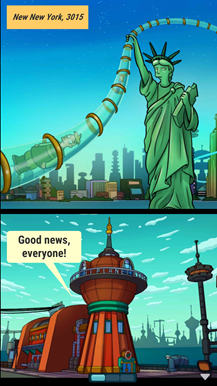 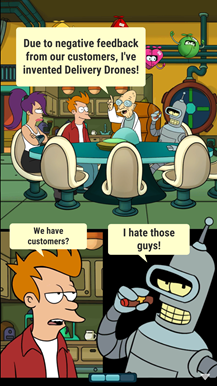 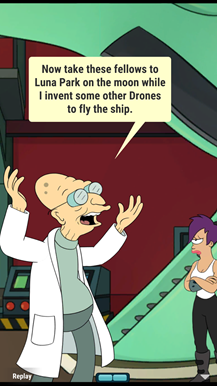 The gameplay itself is familiar to anyone who's tried the match-three formula (though here it's match-four). Swap the tiles around to group them by color, hit certain color goals within the allotted time, use power-ups when you hit a wall. Once you clear a stage with the predictable three-star scoring system, you get a quip from the Professor and do it all over again. Things do get shaken up a bit when you have to play "against" a computer character or clear away specific tiles, but it's nothing you haven't seen before. 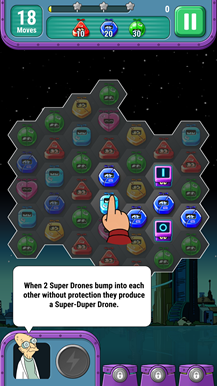 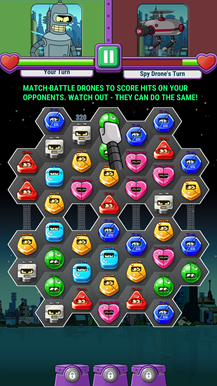 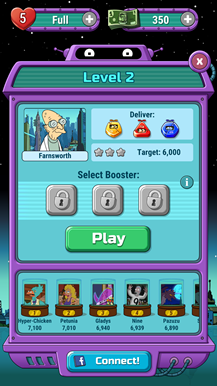 Why are there living characters in the heads-in-a-jar high score area?

If this was all there was to it, Game of Drones would be merely uninspired, not offensive. But be careful: make a wrong move and blow the stage, and you'll lose a heart. For some reason. Hearts in Game of Drones are your "power" or "energy" system, and if you run out, you can't play anymore... unless you pester your Facebook friends to play too, or pay with virtual currency. When you're out of currency, you have to top it up with real money, or just wait. Because that's what everyone loves about video games: the waiting. The title of the game is unintentionally apropos, since it tends to drone on and on. 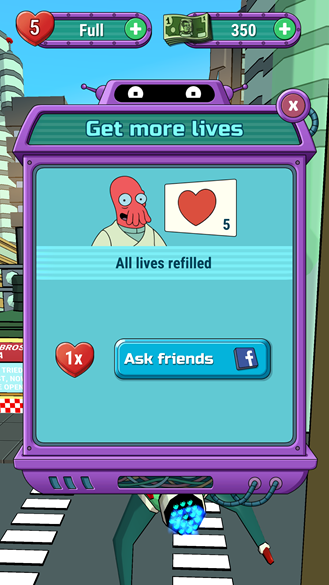 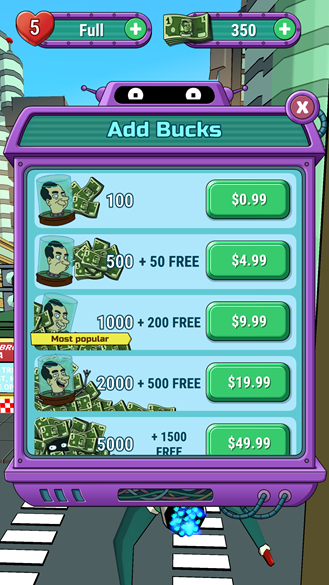 Perhaps more annoying than the presence of in-app purchases (which have become more or less required for every free game of any note) is that they go up to $49.99. The developers think that someone, somewhere will spend enough on Futurama: Game of Drones' disposable and transitory currency to buy a full PC or console game. And the thing about that console game is that you can still play it next week, long after the fake money in the mobile game is used up on unnecessary "health" and power-up refills. This isn't a new observation by any means - the Internet (and this site) have analyzed why this model is exploitative to a nearly offensive degree. But this is Futurama. Futurama doesn't deserve this crap.

Compare Futurama: Game of Drones to the licensed and even sometimes original games that Turner makes through its Cartoon Network and Adult Swim labels. First of all, nearly all of the Cartoon Network games (which are targeted at kids by default) are without in-app purchases, even when they're free. They get income from ads instead, a far more favorable solution when children are the players. Adult Swim's games tend to be original and entertaining, rarely relying completely on an established formula even when they're based on an existing license. And those Adult Swim and Cartoon Network games don't employ arbitrary wait-or-pay dynamics. 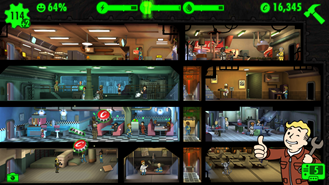 Pocket Mortys is a good example. While it's also based on a science fiction cartoon for grown-ups, it actually uses its source material as a starting point rather than a crutch - the developers have put all kinds of new characters and entertaining elements within the frame of the Rick & Morty universe. The game even includes a little new voice acting, something that Game of Drones is all the poorer for lacking. The game is basically a Pokemon ripoff, but "homage" might be more appropriate, since it loves to make fun of the game's well-established mechanics even as it's using them. And though it would be easy to turn that Pokemon formula into a randomized cash-grab, what in-app purchases are in the free game are surprisingly restrained, and never necessary to continue. Fallout Shelter is another example of a game that manages to incorporate new ideas, stay faithful to its license, and still be fairly restrained when it asks for a little money here and there.

Here's a less positive example: Star Trek Timelines. This is a good freemium licensed game to analyze because it gets the "license" part right, just not the "freemium." Timelines is dripping with Star Trek lore and trivia, and even the battle system incorporates a little real science. But the developers have gone whole-targ on the in-app purchases, with no less than three kinds of in-app currency and significant portions of the game locked off behind "VIP" purchases. It's not exactly "where no one has gone before." 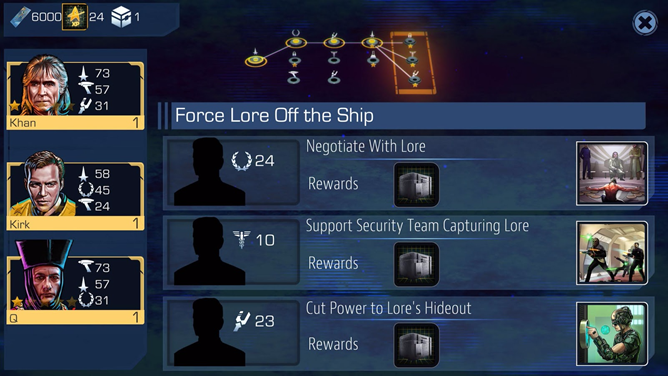 What's the lesson here? There are two of them: a licensed game needs to be deeply steeped in the license that it uses, or at least much more so than this Futurama game is. Ideally it includes a little new content, so players can see their favorite characters in situations that don't feel like a rerun. And second, a licensed game needs to be, well, a game, and preferably one that hasn't been beaten to death a thousand times over like Candy Crush. Game of Drones fails miserably on both counts. It might just be worth a download if you're absolutely desperate to see Fry, Bender, and Leela one more time, but the stock drawings, banal animations, and just plain boring gameplay will soon send you back to Netflix to watch season three for the tenth time.