Last year, Google marked its return to public exhibition at Mobile World Congress, but with a whole new twist: it wasn't really exhibiting any of its own or any of its partner's products, it was all just in the name of fun. You see, at trade shows like MWC, business is the predominant subject of conversation, and while quite a few consumer product announcements may occur, they're often secondary to the whole issue of "things which cause money to change hands." MWC isn't open to the public, either, and so attendees are largely in the mobile business in one form or another, or members of the media. As such, things can get a bit... stuffy. 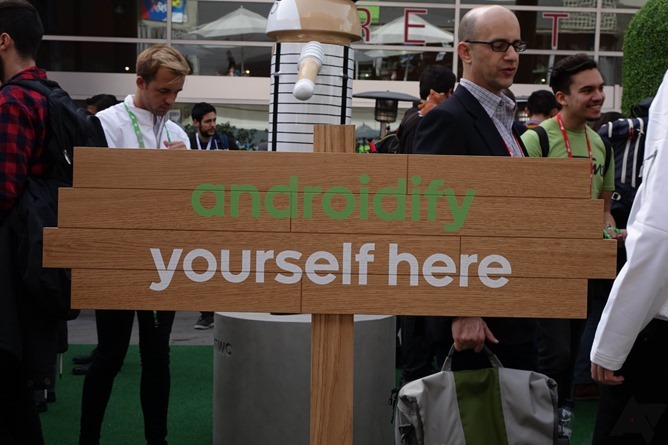 This year, Google is back again with a slew of small exhibits and personalized swag opportunities, and I took the time today to photograph the whole Bugdroid Bazaar between halls at the Fira Gran Via here in Barcelona. On the far end of the walk, you'll find Google's Android-powered robotic sketch artist, just take a picture of yourself with the smartphone on the wall, and this pen (which is of course powered by an Android app) will draw you on a little sheet of paper. 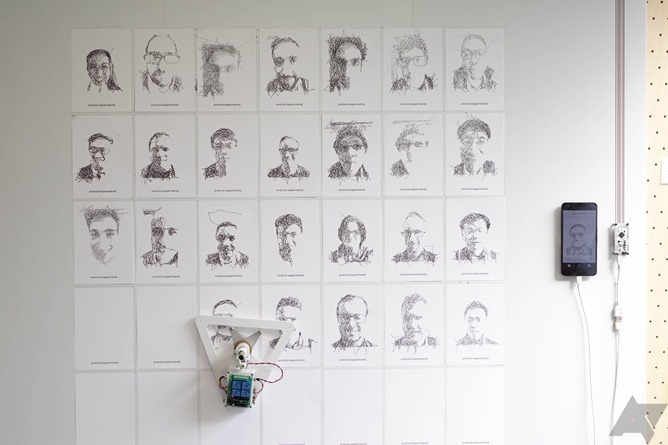 In this booth were also a number of artistic or interactive experiences which used cameras to track your face, analyze colors on a wall, or the gyroscope to explore a virtual scene. 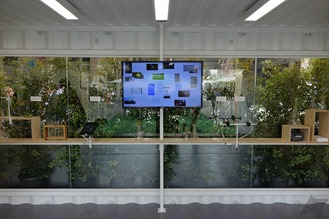 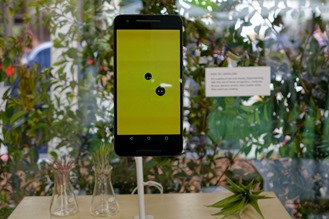 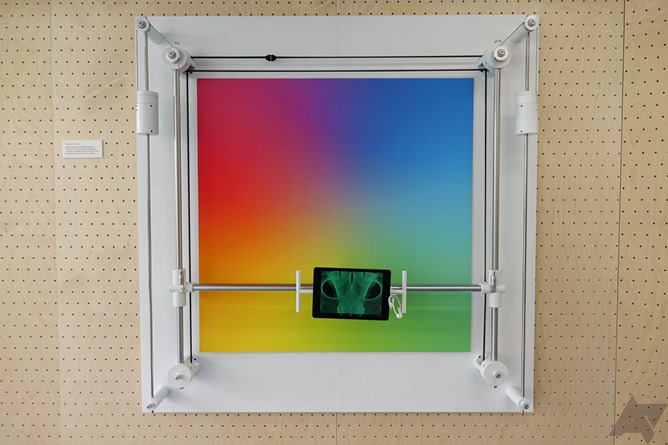 Moving on, there was the Android smoothie and hot chocolate station. The only payment method accepted is a high-five. Seriously. It's compulsory. 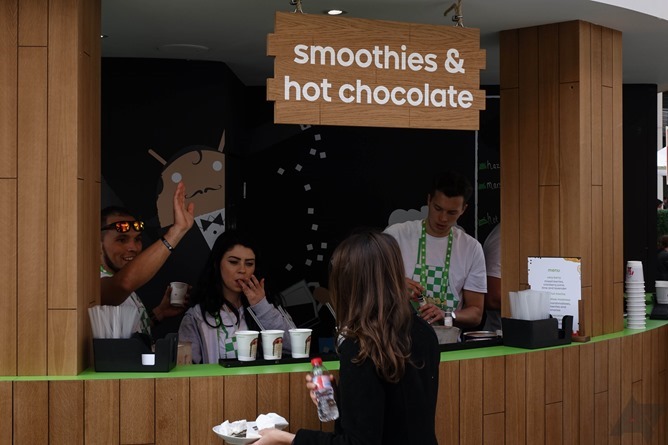 The guys pouring the smoothies were definitely making the most of it. 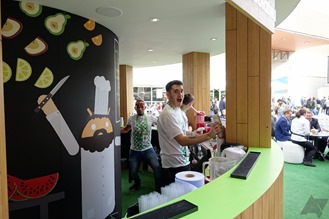 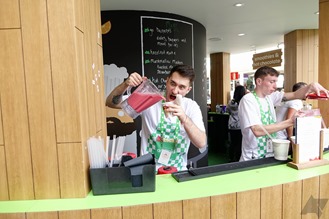 Flavors include "go bananas," "hazelnut mocha," "marshmallow madness," "hot chocolate," and "very berry" something or other. I forget the last one specifically. Switching gears, there was live Android shrubbery art. 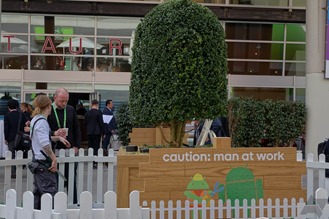 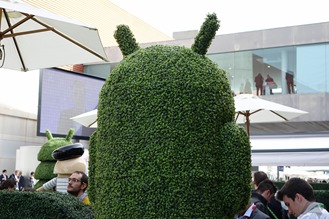 You could also "Androidify" yourself IRL, which allowed you to create a print of your creation and then have it painted on a custom Android water bottle. The line for said water bottles was, unfortunately, quite long. 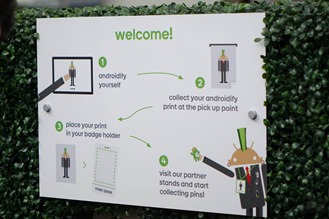 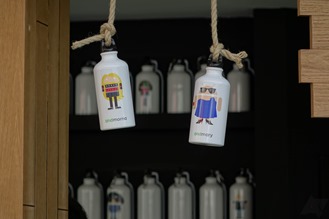 As with last year, Google is doing a grand bugdroid pin scavenger hunt throughout the convention center, with opportunities to collect over 100 badges from Android partner booths over 3 days, with three tiers of completion (bronze, gold, silver). Collecting every badge at the show will get you a mystery prize of some sort. 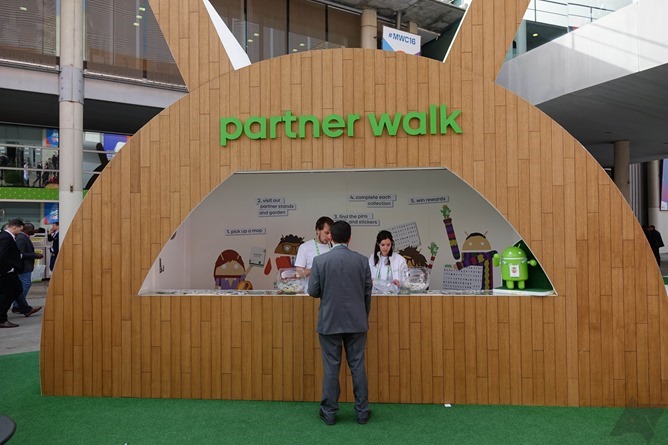 Capping off the exhibit is a giant bugdroid head with Google Play Music headphones on, completely with TVs shaped to look like giant oversized smartphones. 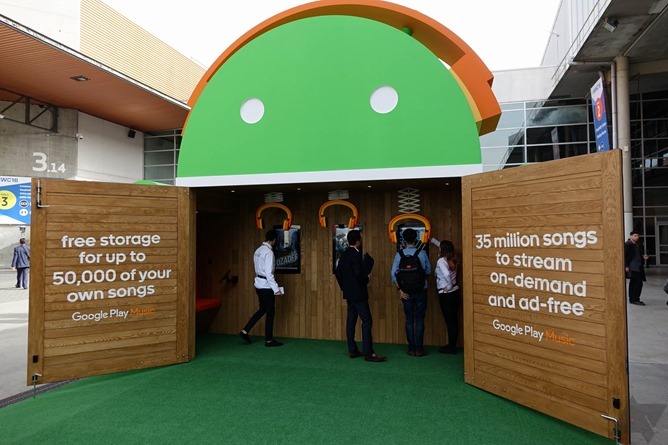 And to finish off our post, a few of the lovely bugdroid statues adorning Google's Android-green garden. 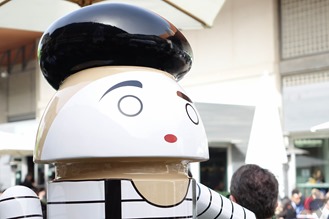 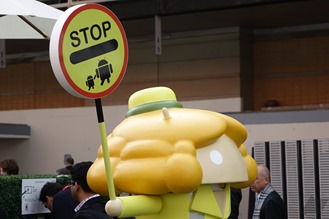 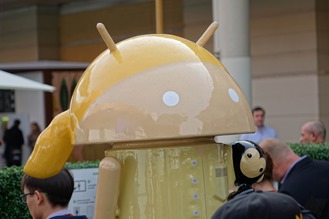 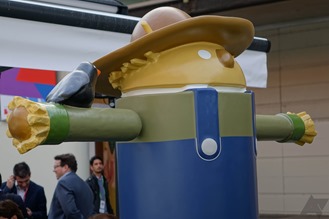 Google, once again, brings some much-needed levity to the world's serious mobile show(TM). And also free smoothies, which are categorically the best sort of smoothie. Martim and I will definitely be queuing up for our custom bugdroid bottles tomorrow.