The LG 360 VR is somewhat more akin to a standalone headset like the Oculus Rift than it is to Google Cardboard or the Gear VR, which are little more than glorified goggles for holding your phone in front of your face. Like the Rift, the LG 360 VR has two screens that present a separate image to each eye. The displays themselves are tiny — as with most virtual reality headsets — coming in at just 1.88 inches, but their resolution of 960 by 720 pixels gives them a density of 638 ppi. This figure is slightly lower than the one for the Oculus Rift, but it is well above what you might get from using Google Cardboard with your own smartphone, so the image is much crisper and pixels are much less noticeable. (Note that the more important number here would be pixels per degree, but LG has not stated that value anywhere, so we have to take ppi as a rough estimate for ppd, assuming all other variables remain more or less constant.) 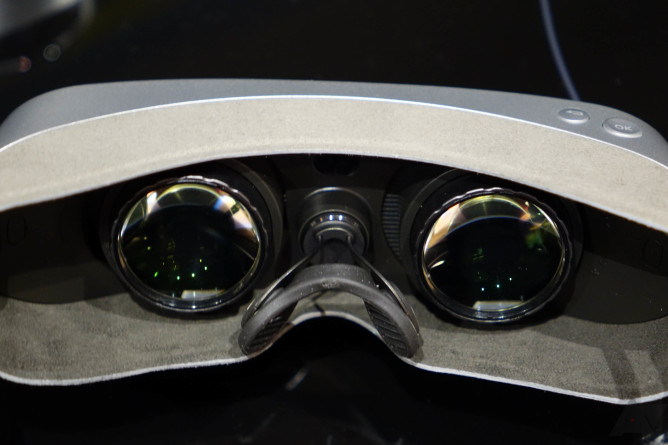 Unlike the Oculus Rift, the LG 360 VR doesn't need a dedicated desktop computer to power it: instead, it connects to the G5 via USB and relies on it to do all the heavy lifting. LG boasted that the type-C port on the G5 supports USB 3.0, and it's possible that the processing and connection requirements for a virtual reality accessory had something to do with that.

The 360 VR is also one of the lightest VR headsets on the market, weighing just 117 grams — about a third of the weight of a typical pair of VR goggles. LG made a point of saying that these minimal proportions make the 360 VR "cool" to wear (possibly even as cool as the little green cat sporting a pair of shades on the front of the device) and eliminates the nerdy look you get from using VR goggles in public — so much so that you could ostensibly even wear it on the subway or train and no one would bat an eyelid. We're not quite sure about that, but you're free to judge for yourself.

The controls for the headset are fairly straightforward: there are exactly two buttons on the top right side that serve either to select the icon at the center of your field of view or to go back to the previous menu. LG has preloaded a handful of demos into the G5 (one of them containing an ostrich standing next to a Santa Claus figure in the middle of a crowded café), and the 360 VR is also compatible with YouTube 360 and every other Google Cardboard compatible app. 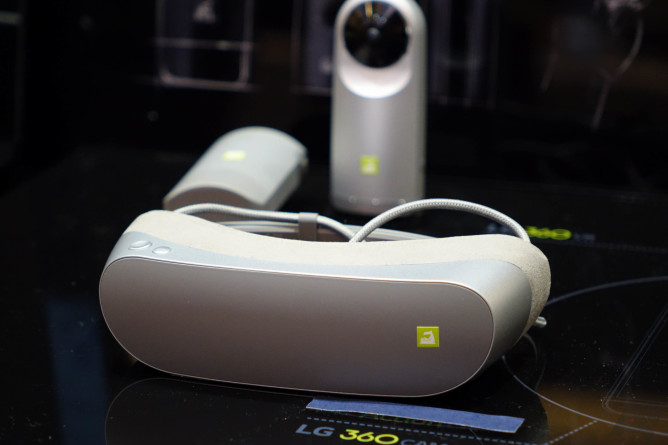 Unfortunately, not every aspect of the 360 VR is perfect. For one, the small size of the device has the disadvantage of not entirely blocking out the exterior light, letting it leak in, especially from above and below. This detracts from the immersive experience, and requires ramping up the brightness to make up for it. There is also a considerable amount of motion blur whenever the user rotates their head, to the point where it can be disorienting to use. This might be attributed to a lower than ideal refresh rate, or simply due to the fact that the LG 360 VR is running off a smartphone and not a supercomputer.

The goggles themselves come in a one-size-fits-all model, and that size may be a bit too tight for some tastes. In my experience, the glasses were a little uncomfortable to use, with the arms digging into the top of my ears and the sides of my head. An adjustable strap would have easily fixed the problem, but LG's decision to go with a more traditional frame means that you won't always get a perfect fit.

On the whole though, the LG 360 VR is a very decent virtual reality headset, and is a good option for anyone considering buying LG's new flagship. No pricing information has been disclosed yet, but given that it's sold as an accessory for the G5, I'd be surprised if it costs anywhere near as much as the $600 for the Oculus Rift.