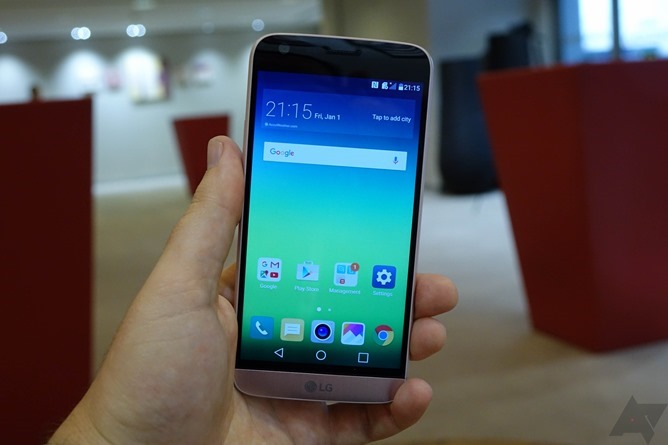 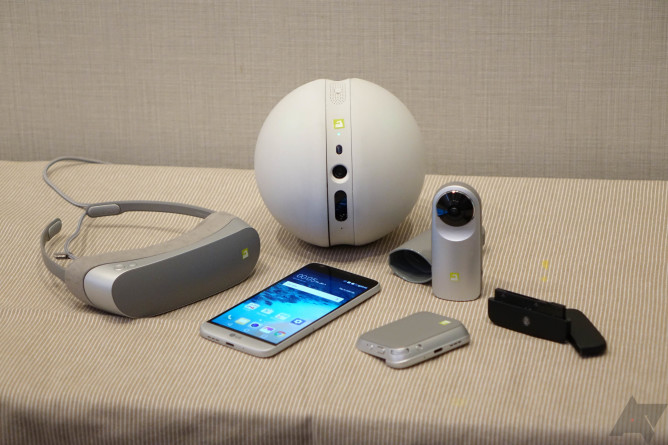 Where to start? There really are a surprising number of areas to cover with this phone, so let's get the basics out of the way. The screen is a 5.3" LCD of Quad HD resolution, which LG claims will provide up to twice the effective contrast in bright sunlight as the G4. This is likely through an adaptive display "overdrive" mode, which LG says can crank up the backlight to provide up to 900 nits of illumination. That's a big number, and we didn't have a chance to take LG up on that with a trip outside.

LG also continues to fly in the face of industry convention by providing a removable battery in the G5, this time with a capacity of 2800mAh, down 200mAh from the one in the G4. A new Snapdragon 820 processor may prove less thirsty than the outgoing 808, though, compounded by the benefits of Android 6.0 Marshmallow's excellent doze mode. There's 32GB of storage and 4GB of RAM in tow. The battery, as you've likely gathered by now, pops out of the bottom of the phone via the removable "chin" piece. Leaks had claimed this would be called the "magic slot," though LG has denied it intends to brand the system itself. 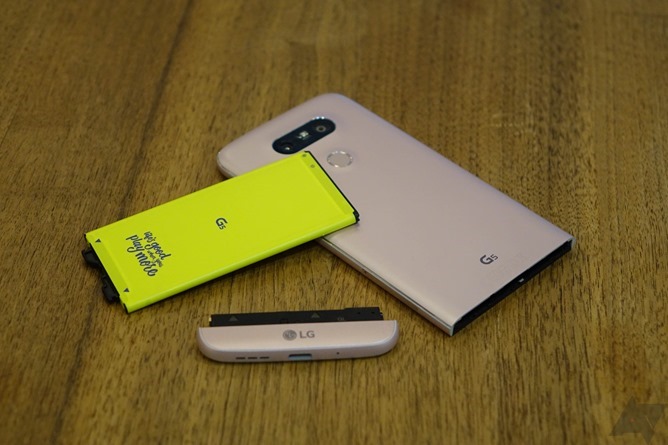 So, let's dig in on this whole slot system - we've got a video below that introduces the mechanics of it all, as well as provide a brief tour of the Cam Plus module, which also includes a 1200mAh battery (arguably the primary reason to buy it at all).

At launch, LG has announced only two modules, the Cam Plus and the Hi-Fi Plus. The Cam Plus is, frankly, a glorified extended battery. The additional camera controls don't hurt anything, but if you're looking for anything beyond a grip, a quick launch key, and a shutter button, they simply won't impress, because that's about the extent of the functionality. There's a dial to adjust the digital zoom, but digital zoom is kind of terrible and I'm not sure why you'd want to use it to begin with. There's also a dedicated button to start video recording, and that rounds out everything the Cam Plus module can do. It's very odd to me that the Cam Plus's actual... camera functions... are quite so limited. I suppose the real "feature" is that it makes your smartphone far easier to hold steady and keep a grip on when shooting, I'm just genuinely not sure how big a demand there is for that in the first place. 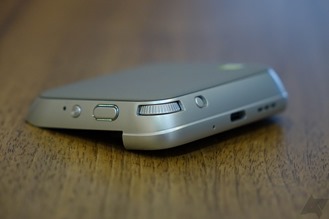 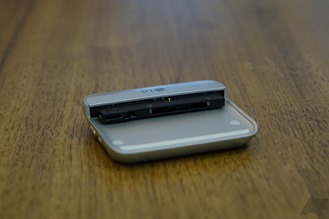 The practical issue is also just how long it takes to put on the Cam Plus. It's not something you can keep in your pocket and just slap on for the moments you need it - you definitely have to plan for it to some extent. Swapping the module means removing the stock chin, which disconnects the battery, removing the battery from the stock chin, placing it in the Cam Plus module, and inserting the Cam Plus into the phone, and then booting the phone back up. You also need somewhere to put the stock chin where you won't lose it, making on-the-go swaps less than practical. It's definitely a bit of a process, meaning the Cam Plus is really only useful if you plan to make it a permanent fixture on your device or you're particularly good about knowing when you're going to need it. 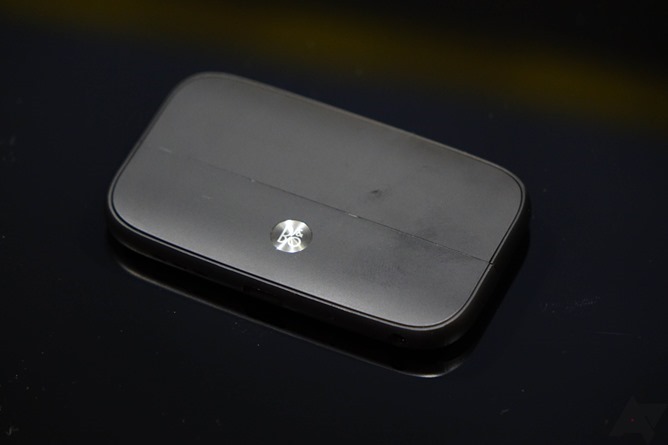 The other module, the Hi-Fi Plus, is more functional, at least in my mind. While I frankly find many parts of audiophilism to be loathsome pseudoscience, there is little disputing that a better DAC and headphone amplifier can increase the quality of your audio on a smartphone, the latter especially when driving on-ear or over-ear headphones, or any headphones with a high level of impedance. I don't have specs for the new G5 DAC/amp module, but suffice it to say that the internal components are better than what you get in the phone itself, and probably provide better electrical isolation, to boot. 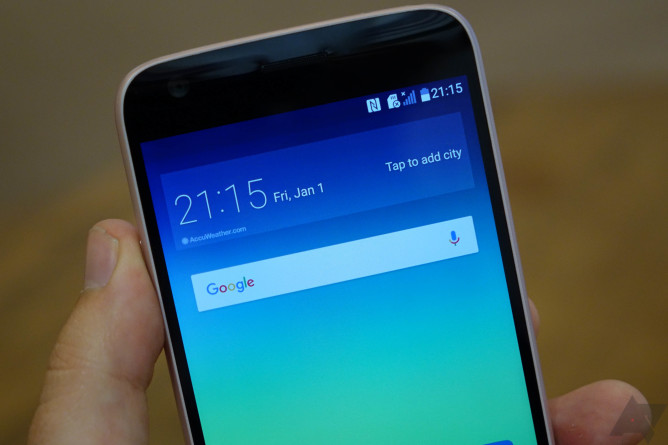 The module is B&O Play branded (frankly, the Bose of our day in terms of unsubstantiated markup and snobbery), which probably means absolutely nothing, but may win LG some points with consumers looking for a famous audio mark. Until we know what this module costs or can compare it to the built-in audio, though, it's impossible to judge on the merits in any sense. Stay tuned. Interestingly, LG claims the Hi-Fi Plus can be used as a standalone DAC/amp for any device - PC, Mac, iOS. This is possible via an upper "half" that the module comes with that is equipped with a second USB-C port. How well this compatibility will work in practice is, of course, another question we can't answer today. 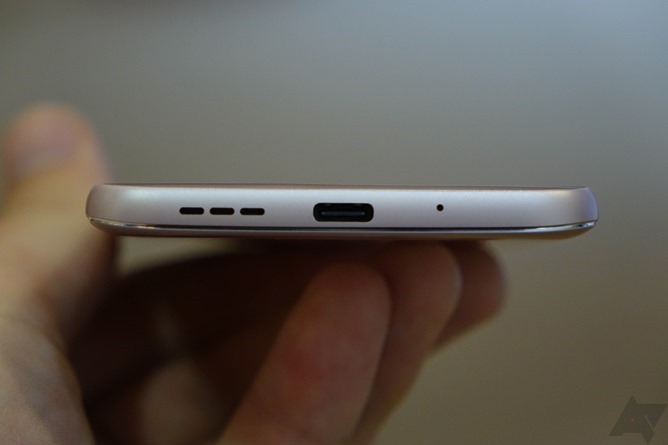 Both slot modules transmit data via the USB3.0 protocol (yep, the G5 is USB3.0), and LG has made the switch to the USB Type C connector on the G5, as well.

Other accessories for the G5 include the VR360 headset (we'll have a separate article on that), the 360 Cam - a 360-degree handheld action camera that shoots 2K video - and the LG Rolling Bot which, well, is basically like a Sphero on steroids. It literally has a "pet mode" where it will run around and shine a laser pointer everywhere to keep your dog or cat entertained. I am 100% serious. 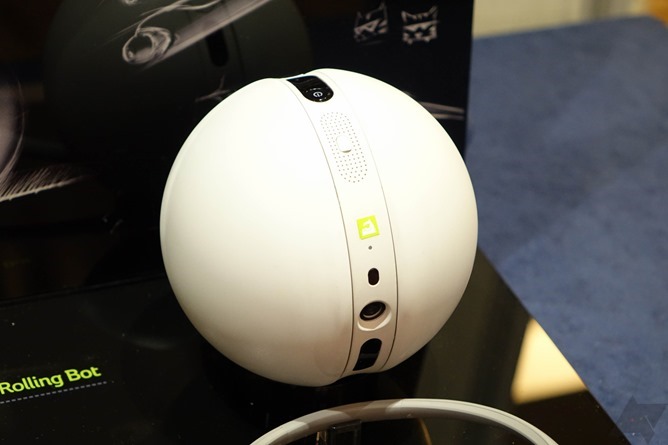 Getting back to the phone itself, let's talk design. I do not think this is a pretty phone, and I respect anyone's right to disagree with that. But while I don't think it's especially ugly or anything, I'm definitely struggling to find angles from which I... appreciate it. The lack of antenna bands on the back gives the phone a "clean" look, but also one that is, to my eyes, very boring. The dual-camera module is an eyesore made all the more apparent by the lack of defining features on the rear, so your eye is inevitably drawn to it. Based on some early design mockups LG constructed that were shown to us, though, the camera module have turned out even less attractive - believe me. 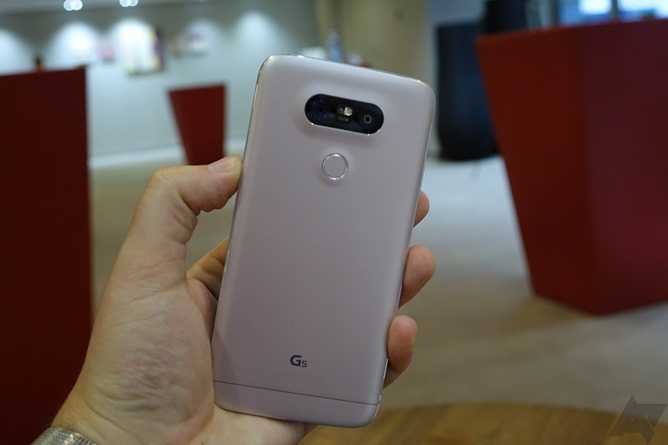 The front of the G5 is, apart from the body-colored "chin" piece, fairly generic. There's a slight curve in the glass at the top of the phone, sloping up from the frame surround, but none of the other three edges of the screen have any curvature, so it comes off looking slightly odd. 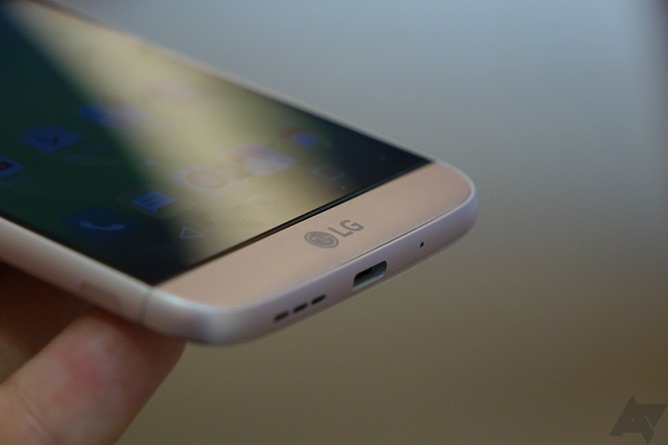 LG's UI layer has been updated aesthetically to a significant extent, but I didn't really have a chance to dive into it with a comparison to the G4 on Marshmallow, so I'm reserving a lot of comments until I can go side-by-side with both phones. The one big software feature is, of course, the "always-on" display. Basically, the G5 will have a ticker display showing a clock and select notifications on your screen at all times. Double tapping the ticker display will turn on the regular screen. LG claims the always-on mode consumes no more than 0.3-0.8% of battery per hour or, for those of you playing at home, up to 19.2% of your battery every 24 hours. So, if you're absolutely trying to eek out every last milliamp hour, this feature may be one you'll want to turn off. 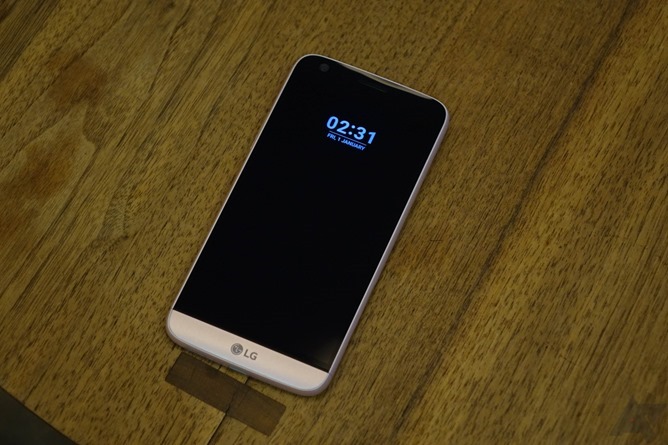 Given how little time we spent with the G5, that really sums up what I consider notable about the phone for now. When it comes time for a review, we'll take a much closer look. As for all those nifty accessories? Their launch dates will likely vary considerably, and it's not clear if all the accessories will even launch in every region the G5 does. And when does the G5 launch? LG was non-committal, but said we could probably expect the first availability some time in early to mid-April, though that could well be the domestic Korean launch. I'm looking forward to spending more time with the G5 once it's actually ready for us - LG is definitely showing off its creative, risk-taking side here, and I'm curious how consumers will respond. 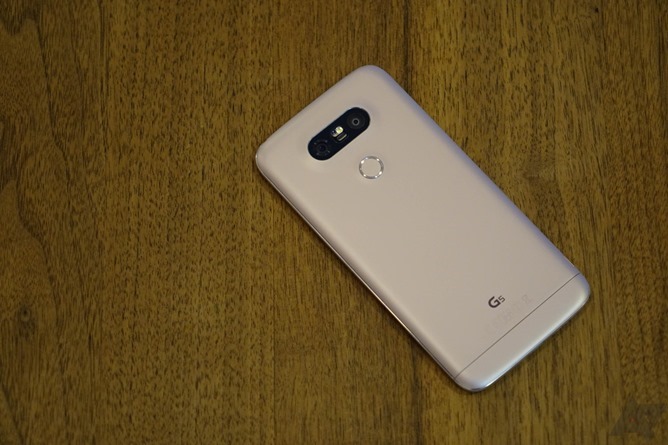 Hands On With The LG 360 VR Headset