The Alcatel [One Touch] Idol 3 [4.7/5.5] was an excellent budget smartphone for 2015. It had an exceptional camera for its price, a great screen, front-facing speakers, and surprisingly decent battery life. It was also more than a bit slow, and it still hasn't been updated to Android 5.1. The Idol 4 and 4S succeed their predecessors with a look back to what those phones did right, but also looking forward to hopefully resolve what they didn't. 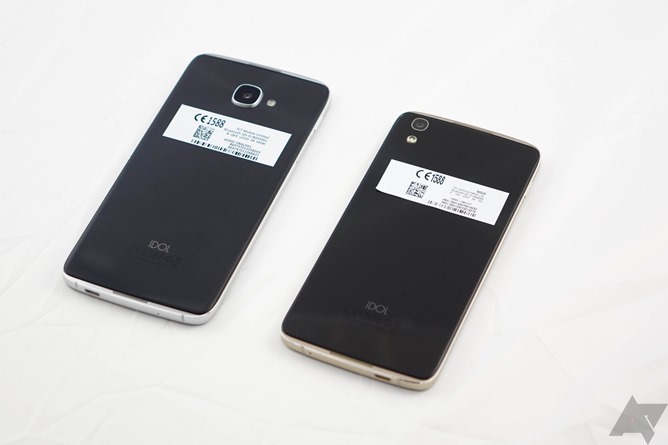 The Idol 4S is undoubtedly the more interesting handset, because it's the one with more stuff. An all-new Snapdragon 652 processor that is shaping up to be quite powerful, a 5.5" 2K Super AMOLED display, a 16MP camera with 4K video, dual speakers, an 8MP front-facing camera with its own LED flash, Android 6.0.1, and a sleek new metal and glass body make it clear that Alcatel isn't sleeping at the wheel. Both phones come in three totally not Apple inspired colors: aluminum, gold, and slightly-darker-space-gray. 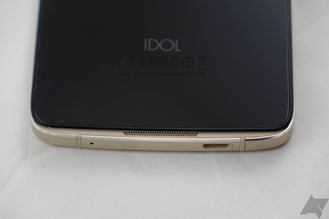 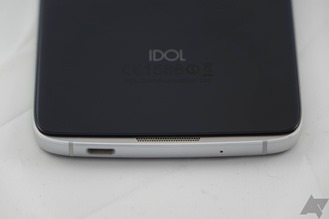 The smaller 5.2" Idol 4 drops the expensive, larger AMOLED display and Snapdragon 652, exchanging them for a 1080p LCD and Snapdragon 617, respectively. It also has a 13MP, instead of 16MP, rear camera. And you do have some other numbers that get chopped: 3GB of RAM becomes 2GB, 32GB of storage becomes 16GB, and a 3000mAh battery drops to 2610mAh. But, crucially, retained are the same 3.6W stereo speakers, the same 8MP front-facing camera with flash, the metal and glass body, and Android 6.0.1. To tell the 4 apart from its larger sibling, simply look to the rear camera module - the 4S's is humped, while the 4's is perfectly with the body and off to the left. 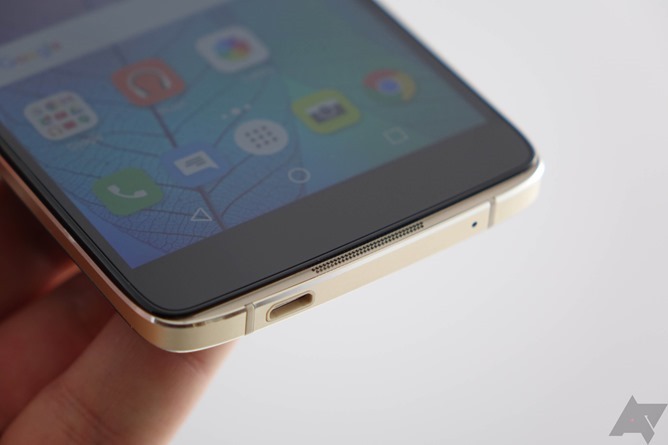 Held over on both devices from the Idol 3 are the dual microphones allowing voice calls to be placed with the phone right side up or upside down, as well as the FM radio feature. Both devices have NFC, microUSB, support a variety of LTE bands (though no band 12 in the US), and have microSD slots. And with Android Marshmallow, you can actually get full use of said microSD card. 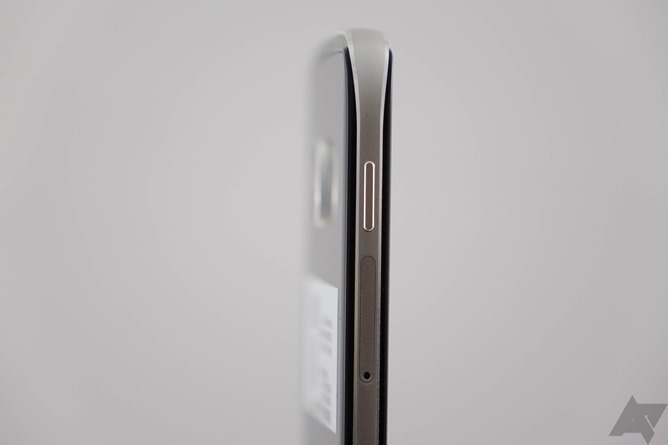 First, let's be honest: these phones look very Galaxy S6-ish in profile. And the 4S from the back especially, with the humped camera module. And that Galaxy S6 narrative is only encouraged by the don't-call-it-a-Gear VR headset. But, honestly, I do think the similarities tend to end there. More substantively, a glass back on a smartphone is bound to stir up complaints from those who see it as a liability more than an aesthetic benefit, which isn't an unfair point. The smaller 4 carries considerable chipset baggage with the Snapdragon 617, the same CPU you'll find in the HTC One A9, and which is a very slight iteration of the notoriously under-performing Snapdragon 615. Whether the Idol 4 will eventually slow down and become rather annoying to use over time, as I found with the HTC One A9, is a question that must wait for our full review. 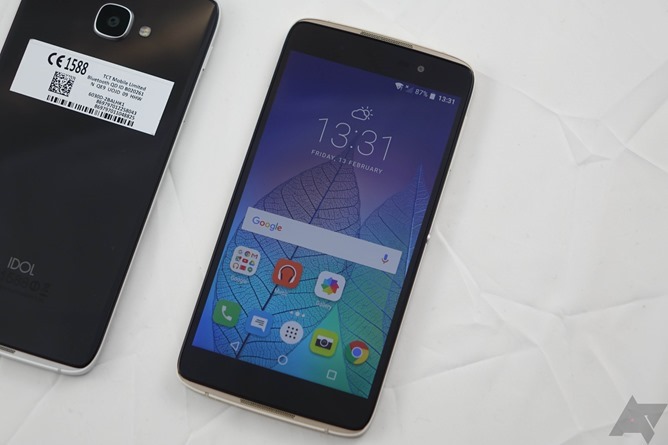 What I like about these phones, though, is that Alcatel really does try to differentiate in ways that are interesting. For example, the 3.6W stereo speakers have outlets both on the front and back of the device. When you're holding the phone in front of your face in landscape, your hands cover the rear outlets, amplifying the effective volume from those on the front. When your phone is on a flat surface, the same effect occurs, so your notifications will come through loud and clear whether your phone is face down or face up - that's pretty clever. The speakers are definitely a bit quieter when you're holding the phone in portrait orientation up to your face with one hand, as sound is leaking out the back - that seems to be the compromise here. But given the benefits in the situations where you really want that extra volume, I think it balances out pretty well. It's nothing if not an interesting idea. Those speakers are also fairly impressively loud, no doubt about it. 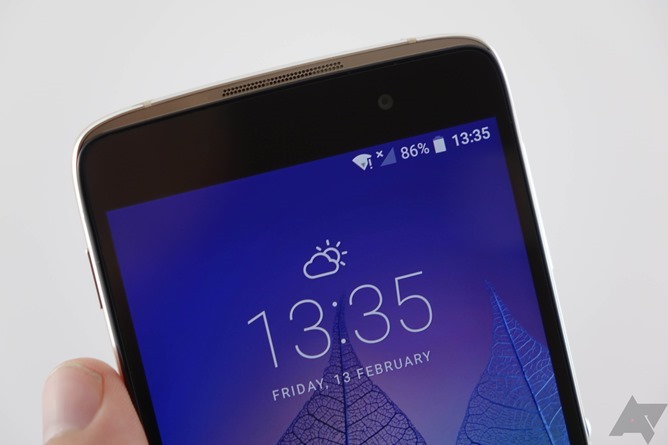 A front-facing camera flash isn't an industry first, but it's still fairly rare, and something that will no doubt see frequent use in our increasingly selfiefied world. That front-facing camera has a wide-angle 78-degree lens and 8 megapixels of resolution to play with, too. The rear camera has a rather interesting - if obnoxiously-named - feature called Fyuse. The idea is basically an inverted panorama that's sort of like a video. You move the phone in a semi-circular motion around a subject you're focused on, creating a 3D photo-sphere like product. But instead of stitching images together into a static scene, the Fyuse system compiles the image frames into a chronological series, and time advances or moves forward depending on where in the resulting inverted panorama you're looking. It's very hard to explain in text, but it's definitely cool. I have no idea if Alcatel is the first to do this, but I'm already keen to try it out on a review unit. It could end up being a Zoe-like gimmick that nobody ever uses, but it held my attention for a few minutes. You can also view those Fyuse images on the VR headset that will serve as the retail packaging in some markets. 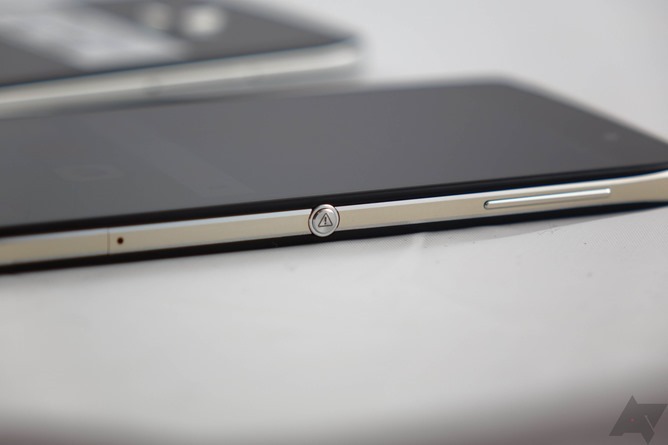 Finally, there's a custom button on the phone that Alcatel calls the "boom" key, which is not a good name. It also has this funky traffic sign logo on it that really screams "don't press me!" But the button itself is a good idea, and one that I think most people wish phone manufacturers would bring back. As you might suspect, the boom key can quickly launch the camera to take a quick point-and-shoot snap (or hold for burst shot), as well as other various functions. Those functions weren't fully operational on the units we used, so I'm not really familiar with them just yet.

Both phones run Android 6.0.1, and the only major modifications you'll find are the lock screen, stock launcher, and the theme of the settings area. Take off the launcher and disable the quick-launch bar on the lockscreen and you'll have a phone that, like the Idol 3 before it, feels fairly close to stock Android. The pre-production devices we used had a fair bit of bloatware apps, I'm not going to lie - it wasn't crazy, but it wasn't exactly encouraging. Alcatel assured me that the US will see the list of such apps culled compared to the rest of the world, but that doesn't fix things for the rest of the world. We'll see how short the bloat list really is when the phones launch. 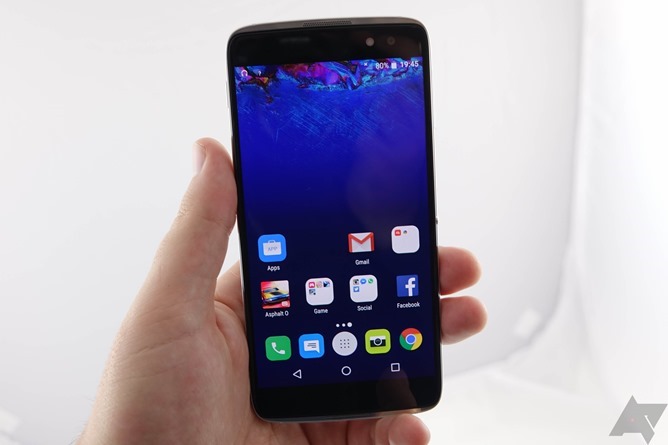 The key question, of course, is what will these phones cost? Other than "more expensive than the Idol 3," we don't know. We also don't know when and where they're coming out, exactly, and it's not clear if all markets are getting that neat VR retail packaging, either (more on that in a separate post). And it's not clear if Alcatel plans to remedy its update situation, either. Given the Idol 3 is languishing on Android 5.0 and the company is utterly mum on future OS updates, it's hard not to heavily asterisk their products with a warning about ongoing Android platform support. Some people may not care about this, but I certainly do, and I hope Alcatel can finally commit to some meaningful promise of support in this specific regard. Overall, the Idol 4 and 4S impressed me, though. The improved build quality is definitely a step up from the Idol 3, and I have high hopes for the 4S's Snapdragon 652. Key questions like those of battery life, speed, and camera image quality will remain unanswered until we get a review unit in our hands, and hopefully that's sooner rather than later.

Pricing has been released for Europe as well as a rough release date (early April), but we're waiting for confirmation on US details at this point, which hopefully will arrive in the coming weeks. 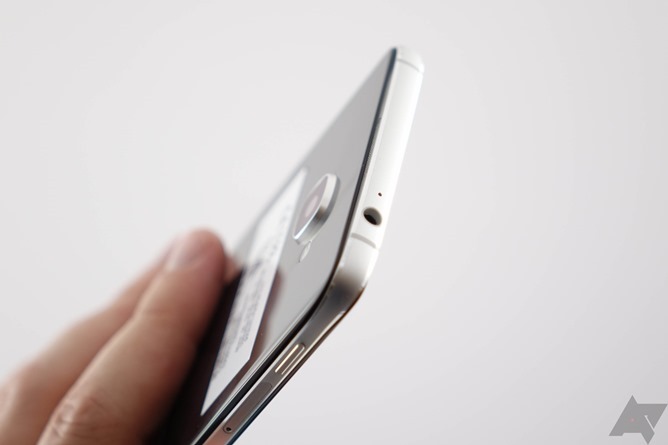 Disclosure: Android Police's MWC coverage is sponsored by Alcatel. Android Police takes editorial independence extremely seriously, and we promise not to let this impact the tone, content, or completeness of our coverage, including articles covering Alcatel, like this one. We are disclosing this to our readers because we value your readership and believe that it is better to be up front rather than avoid the issue until it is brought up. What you do with this information is up to you, but we vow to never let sponsorships impact our editorial relationship with a company.