Back at CES, Blu announced two phones: the Vivo XL and Vivo 5. While we've already taken a look at the former, the latter is the one we've really been waiting for. I've had it in-hand for about a week now, and there's honestly a lot to talk about with this handset. From the specs to the design, this definitely offers more than a $200 handset should, though there are definitely some quirks with the software.

But I'm getting ahead of myself now. Let's start at the beginning. And when we get to the end — stop. 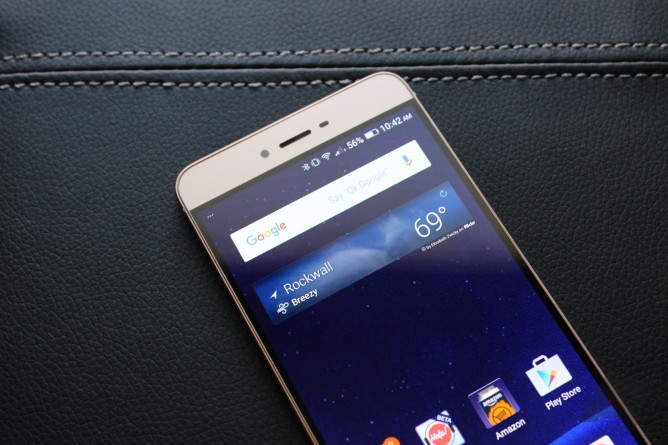 If there's one word I can use to describe the Vivo 5's overall appearance, it's sleek. Super sleek. That's two words, but probably more fitting. This is a thin, light, elegant, visually striking, sexy-as-hell handset. For $200. I sometimes still can't believe where we're at in the "budget" market right now. It's mind-blowing that phones like the Vivo 5, Huawei Honor 5X, and Moto G can be had for around $200…but I'm getting off topic. That might be something we can discuss at a later date. *hint wink nudge cough*

Despite having capactive keys (which I really don't like), the Vivo 5's bezels are quite thin. The side bezels are basically non-existent, while the top and bottom are both very narrow, only offering enough space for the required hardware here (speaker, camera, buttons, etc.). The front of the device is just very minimal and classy.

The back, however, is where it really shows its stuff. Well, the back and sides. Because they kind of go together (in a non-literal sense). First off, the whole thing is made from a beautifully-machined aluminum, and my gold review unit is gorgeous. It's almost like a rose gold, especially compared to some other gold phones on the market. 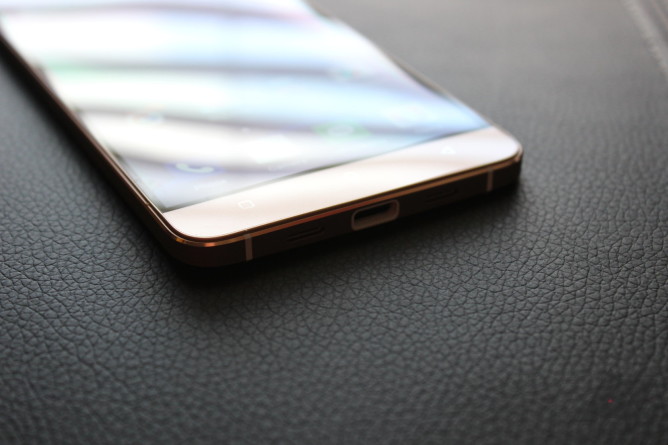 The sides sort of "fold" into the back with a very elegant machined edge, and the back itself is very simple and clean. I really love how it looks — the Vivo line has long been my favorite from Blu, and this phone embodies everything that it should be. Sleek, elegant, minimal, and clean. I'm a huge fan of what Blu has done with the hardware and build on this phone.

Like the Vivo XL, you'll find the V5's USB Type-C port on the bottom, which again is both a blessing and a curse. It's nice to have because it's new technology, superior to its predecessors in basically every way. It's a downer because those 1700 microUSB cables you likely have are now useless. Still, you have to embrace the change at some point, so I'm glad to see Blu go ahead and make the jump to this new format. I hope they stick with it on all devices moving forward.

Back around front, you'll find the same 5.5-inch 720p panel that's on the Vivo XL. Like I said in that review, I know some people will be disappointed by the display resolution, but I honestly don't think there's much of a reason to feel that way. The density still comes in at a very reasonable 267 PPI, which is nothing to scoff at. I mean, it's not the 518 PPI of something like the Nexus 6P, but it's still very usable (and almost a third the cost of a 6P, too). On a display of this size, it's barely noticeable to my eyes, and the Super AMOLED panel looks great. 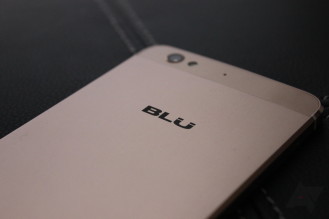 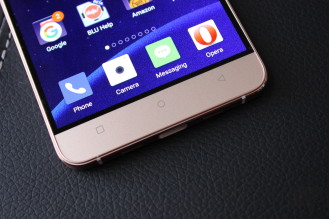 Like I said in the VXL review, the SAMOLED display's color reproduction is really nice — better than the Nexus 6. In fact, it's very comparable to the 6P when it comes to color balance, which is really impressive for a phone at this price point. The whites are actually a bit less dingy than the 6P's, and other colors are slightly more vibrant. In other words, there's a bit more range on the VXL, but ultimately it's really a wash. Just know that this is a damn nice display for a $200 phone, resolution be damned.

Finally, let's talk about the camera.

Basically, this is the same camera that's in the Vivo XL, but it has a couple more options in the software. Here's the full list of shooting choices:

OK, so there's everything the camera can do. Now here's some examples of how it looks doing that stuff. Pretty much all of those shots were done in the "normal" setting for comparison purposes. Overall, it looks pretty good. Pretty, pretty...pretty good. It's also worth mentioning that I really like the vibration motor in this phone. It's crisp and very satisfying. That didn't fit anywhere else in this section, so I just threw it here at the end. 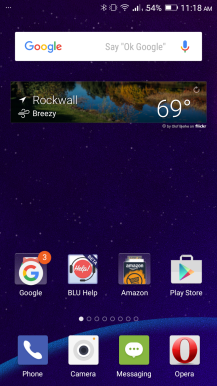 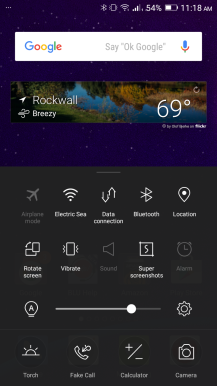 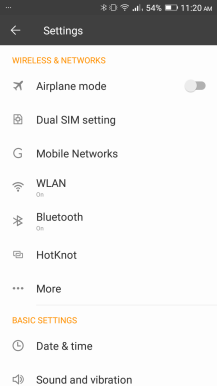 Software is where I find my primary issue with the Vivo 5. Like with the Vivo XL, it's that orange and white theme that Blu sometimes uses and I oftentimes dislike (mostly for aesthetic reasons). This time, however, I found a bigger reason to be irritated: some of the settings options are simply inaccessible. They're still available, but you can't get to them.

For example, nowhere in the security menu will you find the option for Smart Lock. I often use this feature to disable the lockscreen when I'm at home (especially on review phones), but it's just not there on the Vivo 5. However, when you pair a new Bluetooth device, guess what option pops up in the notification bar? The option to set it as a trusted device in Smart Lock settings. So, like I said, the option is there, but I can't find another way to easily get to it. It's super annoying.

While I didn't immediately find other missing (or hidden?) settings, I'm sure that Smart Lock isn't the only one. I just didn't happen to stumble across the others during my time with the phone.

Really, for better or worse, the software on the Vivo 5 is pretty much identical to the Vivo XL.

Performance, on the other hand, is slightly different on the Vivo 5. Despite having the same display and processor, the V5 benchmarks slighly better than the VXL — that extra gigabyte of RAM just gives it the extra push that it needs to be a slighly faster device where numbers are concerned. In real world use, though, it doesn't feel any different.

That said, I'm absolutely certain that it will outperform the VXL on a longer timeline — the more you use it, the more apparent it will become that there's a third gig of RAM in this phone. That's pretty much going to be true across the board for any 3GB phone when compared to just 2GB.

But for those who like to see some numbers, I have some for you. You're welcome. 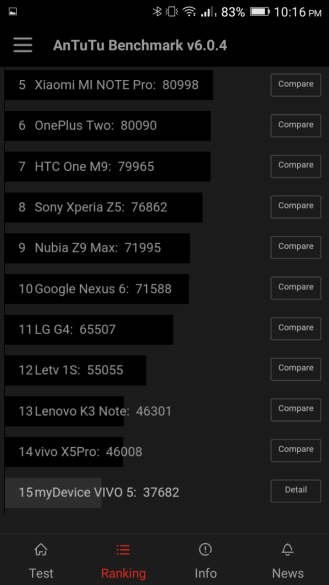 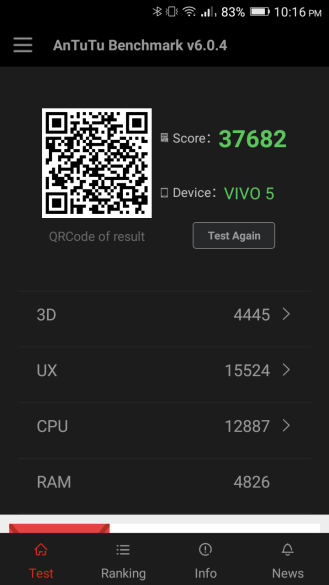 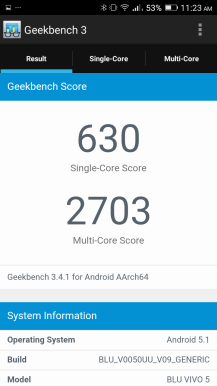 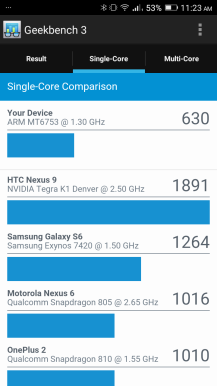 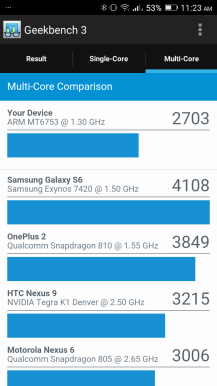 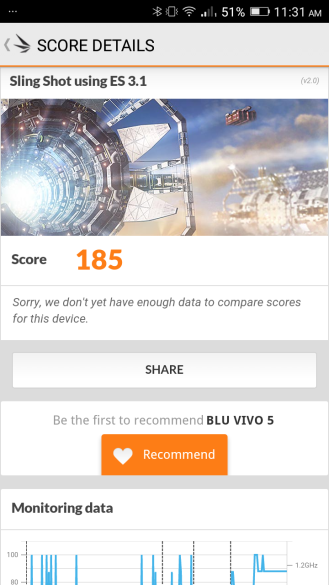 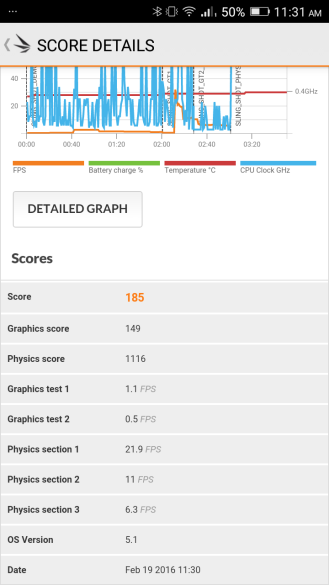 If you haven't already figured it out, this is a great phone for $200. The hardware and build quality are both excellent for this price, and the device has a nice, premium look to it. I have zero complaints about the hardware (though I would like to have seen a fingerprint reader on board).

The software, however, is where you'll start to find some quirks in the Vivo 5 — mostly just because of the wonky skinned settings menu that hides some of the options for no good reason. While that's frustrating, I don't feel strongly enough about it to say "don't buy this phone," because it's otherwise an excellent handset. I'm sure that ultimately there's a way to access the hidden options like Smart Lock, but I didn't spend the time to research and/or sort through all the possible answers. And who knows, this could be (and hopefully is) something that Blu will fix when the Marshmallow update rolls out.

Otherwise, if you're looking for a $200 phone that looks and feels like something much more expensive, this is an excellent contender. It's available today at Amazon and Best Buy — grab it from the appropriate links below. 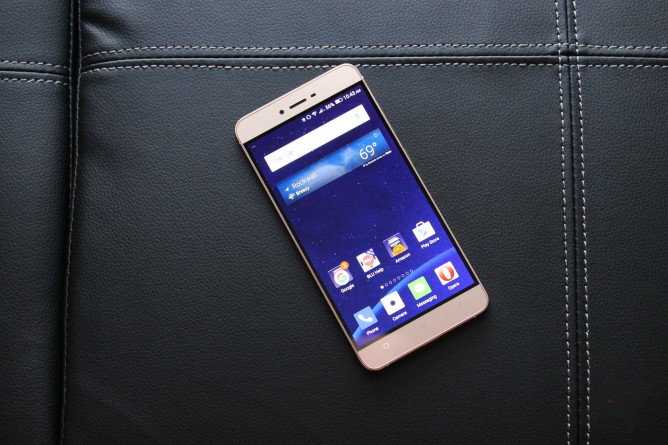