Motorola launched the second-generation Moto 360 last fall and fixed many of the issues with the original watch, but at the same time it teased the Moto 360 Sport. It took months for it to come out, and even then there was little promotion surrounding it. I don't think you can deny that it's a less elegant device than the standard Moto 360, which comes with the same $299 starting price, but there are a few distinct, sporty features that might tempt you.

Because I haven't had a chance to test the 360 Sport until just recently, I wasn't sure it warranted a post, but we're going to do this quick review-style. Let's hit the highs and lows of Motorola's fitness-oriented watch.

One of the main things that separates the Sport version of this watch from the standard one is the display. Again, it's a 1.37-inch flat tire screen like the smaller Moto 360, but it's what Motorola calls an AnyLight Hybrid display; basically a transflective LCD similar to the Sony Smartwatch 3. That means the 360 Sport is extremely readable in bright light, even in ambient mode. Check out the comparison with the regular Moto 360 below. The regular 360 is one of the better watches for outdoor readability, but the 360 Sport is perfect in this respect. I have a photographic light pointed right at the watches just a few inches away, simulating extremely bright direct sunlight (sorry, no real sunlight in Minnesota lately).

One of my gripes about the transflective screen on the Sony watch was the yellow-ish tint of the full color mode. Motorola's watch doesn't have that. The colors are a bit more muted than they are on the regular 360, but it's not very noticeable. Yes, flat tires are dumb, but it's something a lot of people can adjust to. On the plus side, there's an ambient light sensor, which you still don't get on the fully round watches. 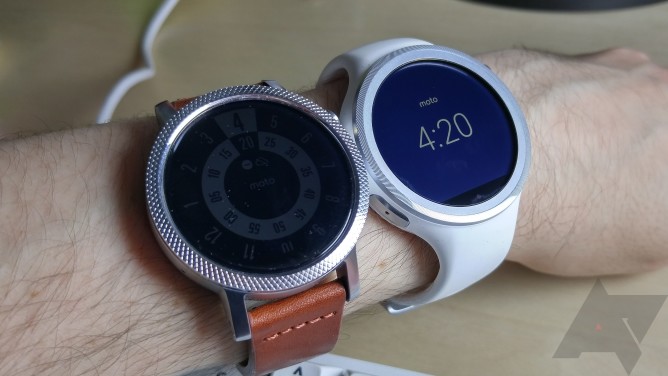 The 360 Sport is much more readable in bright light.

There's an optical heart rate monitor in the Moto 360 Sport, which was annoyingly missing from the Smartwatch 3. I've never had good luck with the sensors built into other watches, but Motorola seems to have really focused on making this one work. I don't know if it's a hardware change or something in the software, but this one works extremely well. I compared the watch's readings to a dedicated heart rate monitor, and the 360 was pretty close. It's also consistent, fast, and even works when moving. Those are all issues I've had with the sensors in past watches. 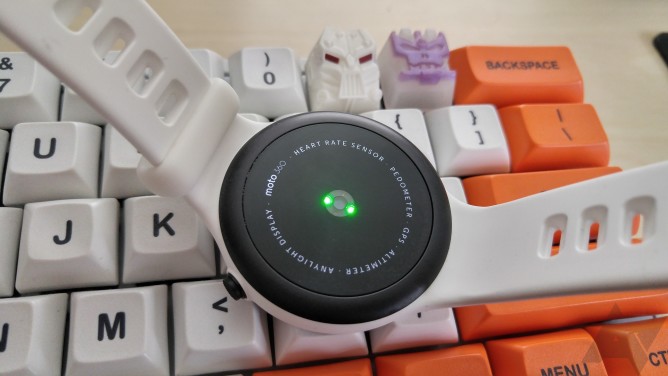 GPS. This watch has it, and many still don't. Not only that, it's actually quite good. It seems to lock on faster than the Smartwatch 3, but it's still going to kill your battery in a few hours. It's fine for a quick run, though.

As with the regular Moto 360, the Sport has great watch faces. The only new one is what I have in the image above. It's obviously a fitness thing with quick access to heart rate, steps, workout timers, a stopwatch, and so on. It includes a few more fitness tracking features as well.

As I mentioned above, the 360 Sport is not as attractive as the regular 360... or for that matter as the Huawei Watch or Fossil Q Founder. The silicone band makes sense for a fitness-oriented device as you can get it all sweaty and gross on a regular basis without worrying about messing up a nice leather band (you can, of course, buy a silicone band for other watches). In that respect, it does the job. However, the silicone picks up dust and lint at an incredible rate. It pretty much always looks kind of gunky, and it doesn't feel like I expect a $300 watch to feel. You're also stuck with the band you choose at purchase. The 360 Sport comes in black, white, and orange, and the band is non-removable. 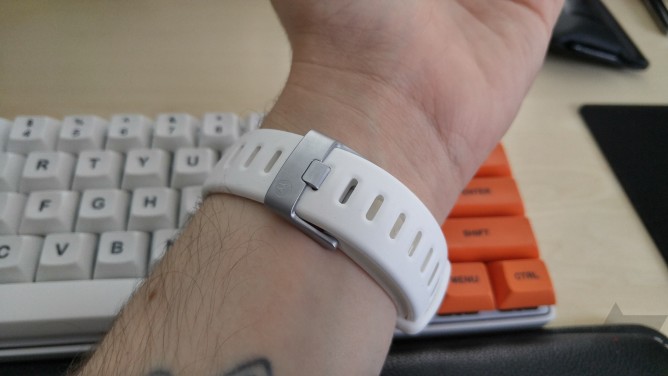 While the AnyLight display is overall very cool, it comes with the very clear drawback of being non-backlit in ambient mode (it was the same way with the Smartwatch 3). That means you won't be able to read the ambient mode display in a dark room, but will instead have to wake the watch up.

The 360 Sport has the same 300 mAh battery as the 42mm regular 360, but I had high hopes that the battery life would be considerably better with the non-backlit transflective display. However, it's only a marginal improvement. The 360 makes it a day, and the 360 Sport makes it a day plus a few hours.

I also take issue with the crown button on this watch. Like the regular 360, it's at the 2 o'clock position. However, it's made of textured plastic instead of metal. Every time I press the button, it just seems cheap and not like a $300 watch. 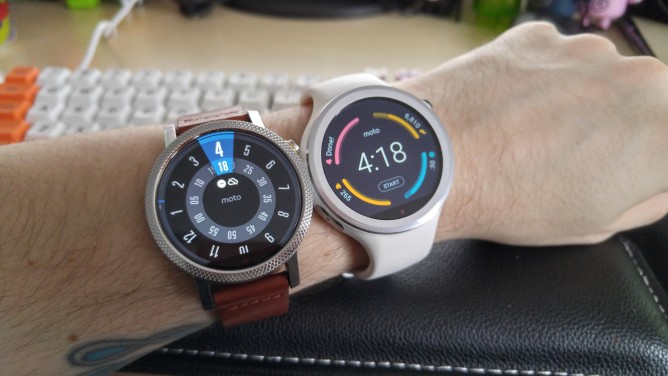 In the end, this seems not as much like a "sports watch" as a smartwatch with a slight focus on sports. It's still Android Wear, so it's capable of a lot more than most sports watches, and consequently only lasts about a day. At the same time, it makes some compromises to be better for fitness applications like the silicone band, non-backlit display, and plasticky design.

Don't buy this because you want a fitness watch, but maybe you could justify it because you want an Android Wear watch with a few more fitness features. I'd still tell most people to just grab a regular 360 at the same price, though.

JetBrains Releases v1.0 Of Kotlin, A Smart JVM-Compatible Language That Can Be Used To Write ...