It's no surprise that guys and girls do things differently when it comes to tech, but that couldn't be more true in my own relationship — the way I use my phone versus the way my wife does things is actually pretty dramatic, including what each of us looks for in a new phone. Where I want to know how the fast the processor is, how much RAM it has, and what the display's PPI is, she's more interested in how "good" the camera is and if it charges quickly for those times when our three-year-old inevitably kills the battery. (He's not allowed to use my phones, so I don't have to worry about that. Plus I do a good enough job of killing batteries on my own.)

So, working together with LG, we decided to do a little experiment. After I reviewed the V10, I handed it over to her so I could see what she thought of things she'd never used before: the rear volume and power buttons, fingerprint reader, the second display, etc. I was curious to see how she handled the device from the start, and how she felt about it after a few weeks. You know, as a "regular" user.

First off, she's been using Android since the original Motorola Droid X. After the X, she went to the Samsung Galaxy Nexus (and hated it), then to the 2013 Moto X, followed by the 2014 Moto X. In other words, she's not a newcomer to Android, but she has used mostly-stock phones since the beginning.

Like I said earlier, I handed the LG V10 over to her after I finished reviewing it. I loved it, but I was curious how she'd react to it. I'm generally fascinated by how "regular" users handle new features, because I've always been enthusiastic about tech, so I've never experienced things from that side of the fence. Watching my parents try to figure out Windows 8 was especially entertaining…but that's a different story for a different day.

Unsurprisingly, my wife doesn't read most of my work here at Android Police, so the only thing she knew about the V10 is that it had a wide-angle front camera (because we tested it out on Halloween), which she liked. I showed her where the buttons were and mentioned the second screen, but past that, I left her to it. 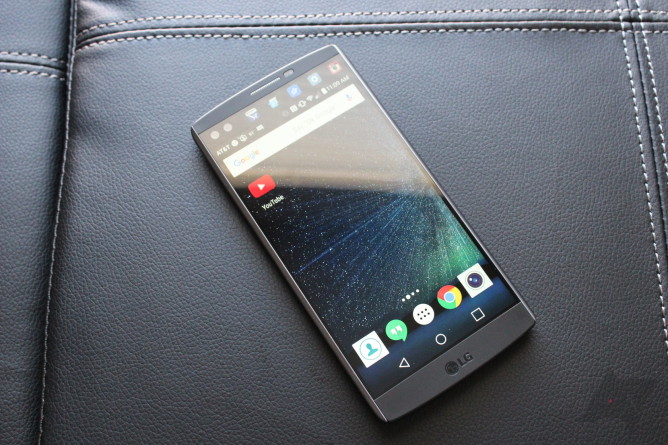 Before we get into her time with the V10, however, I want to talk a little bit about my time with the phone. You know, the stuff that doesn't go into a review. The stuff I do while getting familiar with a piece of hardware before I sit down to start putting my thoughts on "paper."

The V10 is actually an excellent phone to look at from this angle, because it has some unique features that we haven't seen on other phones — like the second screen, for example. After booting the V10 and setting it all up (and spending like six hours letting all my apps sync), the first thing I did was go through LG's software interface to see what was different compared to the "norm" (in this case, stock Android) and what modifications I actually liked. While I try to be mostly objective in reviews, I of course form my own opinions and feelings about certain devices and features while using them, though I normally keep most of that stuff to myself.

The first thing that struck me as interesting is that I actually don't hate LG's launcher! I'm normally a total launcher snob, with Nova being the only thing I'm ever interested in using. I don't recall switching the launcher at all while I was using the V10 (to be clear, I always force myself to use the stock software on review phones, at least until I am familiar how badly they suck), and grew to appreciate the unread badges and whatnot. I was impressed with how usable the launcher actually is.

Once I checked out the launcher and whatnot, I dug through the settings menu to see what was new, different, or otherwise unique. I was specifically interested in what the second screen was capable of. Now, I'm not going to give an in-depth look at the second screen since I've already done that in the full review (remember, this is about looking at how I do things, not what I found while doing them).

Basically, what I'm trying to say is that I spend an unreasonable amount of time digging through the settings menu, looking at OEM app settings, and otherwise exploring my new handset. It doesn't matter if it's a review phone or a new personal phone, I treat them both the same way. I want to know what's different, where to find it, how to change it, the phone's software limitations, and most importantly, what I don't like about the device. Some people may say that's me being negative, but I feel like it's a big part of my job — I want to find the faults and flaws in everything. I love it when I use a device or write a review where I have to actively think about what's wrong with it. When there's a lot to like and there are no real glaring issues, it becomes more of a challenge. I appreciate that. But to be fair, I also love it when I get to rip into a device that's terrible, too. That's just fun.

My wife doesn't do any of those things. She doesn't immediately start poking around in settings or tweaking the homescreen layout. She does't run benchmarks and compare her new phone to other phones. She installs her apps and starts using her new phone the same way she was using the old phone, slowly incorporating any new features that may seem interesting. Since she's been using the V10 for a few weeks now, I asked her what some of her favorite things are. Her answers actually surprised me. 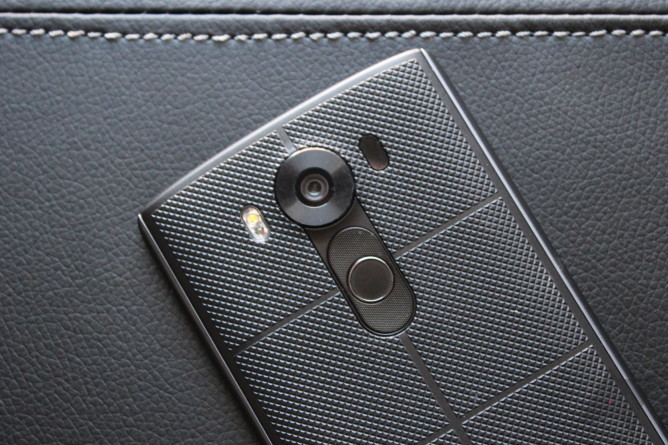 "The fingerprint thingy. I like that. But don't call it that. Don't quote me." That was her first response, which I never expected. I actually love that she called it "the fingerprint thingy," because it's a real, honest answer from someone who uses devices in a very different way from me. It also showed me that regular users actually do care about things like fingerprint readers and they're not reserved for "power users." Considering it was the first thing she said, it really made a statement to me about how powerful this tech really is — it's something that everyone from the average user to the hardcore tech person can get behind.

Her next response, "the wide angle cameras," was honestly what I expected her to say first. She's often talked about how much she loves the V10's cameras, and I know that's always her first requirement when looking for a new phone. Again, that's what shocked me most about the fingerprint reader getting the first nod. But the V10 does have a great pair of cameras, so I knew it wouldn't go without mention. She also loves the "beauty face" feature. She tells me that a lot of girls like that feature. Who knew? 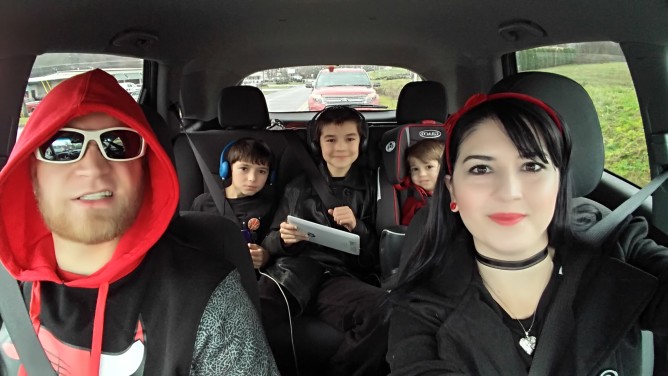 The second screen is one of those things I consider a niche feature that only some users are going to like, but she loves it. According to her, it's "the menu at the top," which is simple enough and actually says a lot about how she uses the phone. To her, this area is essentially a quick launcher, and she took the time to sort through the settings and customize the quick launch area. When I reviewed the phone, I did the same thing and never looked at the QL area again. To me, the second screen is nothing more than a killer little notification panel, which is my favorite thing about it. She also likes that it can display custom text, where she has her name. (It said "#SeeRed" when I used the phone. Go Bulls.)

Like I mentioned in the intro, Quick Charge capability is a big deal for her (both of us, really). Needless to say, that's another one of her favorite things about the V10. She got used to having it on the Moto X, and I'm certain that she would've hated not having it on the V10. The fact that it also has a user-replaceable battery is an extra perk that the V10 has going for it, because when you don't have 15 minutes to bump the charge, throwing a spare battery in only takes roughly six seconds. Maybe seven if you're slow. Or five if you're fast. You get the idea. 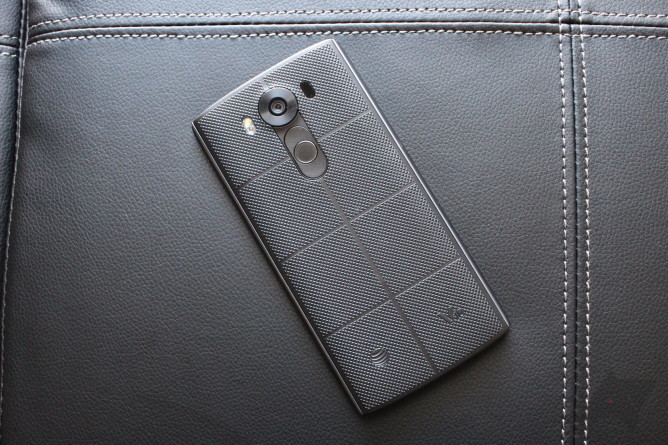 Finally, the rear keys made her cut of favorite things on the V10. I, too, love this design, especially with the fingerprint reader in the home button. She said that she "didn't like it at first," but after getting used to the placement she came to the same conclusion that most other LG users have found: it just makes sense. It also makes the sides of the phone sleeker and more modern-looking. Those are my words though, not hers. Apparently since I'm writing this I feel it appropriate to inject my opinion wherever I want.

So, what's the point of all this? For me, it was a look at how "the other half" (quite literally) lives. My wife and I don't generally talk tech that much, because it's not her thing and I don't really like to "take my work home" (that's funny, because I work from home). I've never really asked her what she likes or dislikes about certain pieces of tech, unless she specifically makes a comment about something she's using at the time. Handing over a phone that she probably wouldn't have otherwise chosen for herself has been a fun experiment for both of us, because it gave me more insight as to what's important to people who just "use" their tech and want it to work. For example, not once did she mention performance, which is generally the first thing I want to know about a new phone when I get it. She just wants it to work when she needs it do, and doesn't think about it too much past that.

For her, I think it was sort of eye-opening, as she got to see something new, something more exciting than a "typical" handset — there's all sorts of new (or new-ish) tech in the V10, and I think for the first time in a long time, that got her excited about technology. To me, that's definitely something worth talking about.

Click here to buy the V10 (direct link to LG)

We'd like to thank LG for providing the V10 we used for this experiment.

JetBrains Releases v1.0 Of Kotlin, A Smart JVM-Compatible Language That Can Be Used To Write ...