The Clock app doesn't get a ton of updates, but when it does there's almost always something worth talking about. The latest version does a little bit of everything with a little bit of visual polish and updates for the Android Wear app. As usual, there's a link at the bottom if you'd like to grab this version before it rolls out to your devices in due time.

Correction: For some reason Night Mode was not appearing on some devices and was accidentally listed as a new feature for a few minutes. It turns out that this is an older feature that evidently wasn't showing up on at least a few devices. The section about Night Mode has been removed. So, if you didn't already have it for some reason, you probably will with this update.

Just look at the huge image at the top of the article. Yup, that's new. With the previous version of the Clock app, any action that added, deleted, or enabled an alarm would simply pop up a toast message to confirm the action. It looked fine, but it didn't have that WOW factor. The new version still might not blow you away, but it looks a lot cooler.

Any action on an alarm–except for disabling one–activates the animation. A snackbar (that's what it's called) slides up from the bottom of the screen and pushes the floating action button out of the way for a couple of seconds before sliding back down and disappearing.

There's really no surprise with this feature–it has been mentioned a handful of times in reviews of the Urbane 2 and by anybody that already has Marshmallow on an Android Wear device. The watch-based alarm can now be configured to turn on or off the audible alarm and the vibrating motor, so users have a choice about how they should be woken up. Of course, the options should only appear if the app is installed on a watch with a speaker (and again, only if it's upgraded to Android 6.0).

A properly resizable widget, more on Night Mode, and other tweaks

A few things didn't make it into the initial post, but there are a few other additions that deserve a mention. While they won't be enumerated individually, there are a few small cosmetic tweaks to animations, drop shadows, and text. The overflow menu also contains a "Send Feedback" action, just like most other Google apps. Here are the bigger changes:

I mentioned above that Night Mode is now reliably showing up on devices where it may not have before. Additionally, it is now accessible from all four tabs. In previous versions of the app, it only showed up on the clock page, but there's no need to hunt for it anymore. 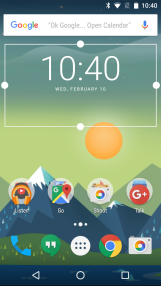 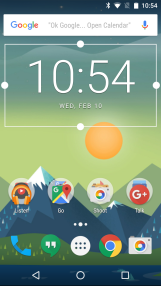 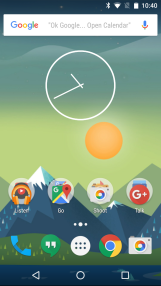 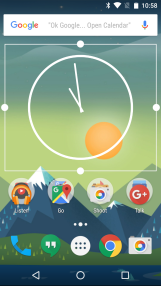 The homescreen widgets have been updated to be fully resizeable. The previous version included an analog widget that was locked in at 2x2 with no option to resize, and a digital version was resizable, but didn't fill the entire height or width of the sizing box. Now, the analog clock can be sized to the full height and width of the launcher (though the visible clock remains at a strict 1:1 ratio, as it should), and the digital clock fills out its bounding box as fully as it can. - Thanks, Everton Strack.