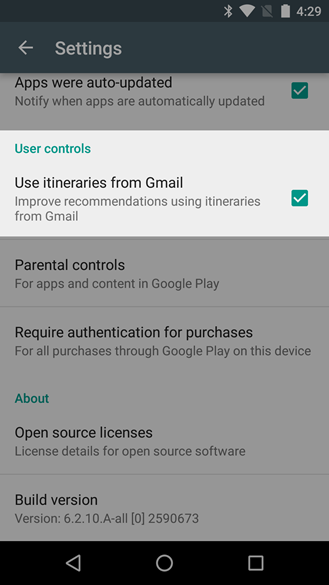 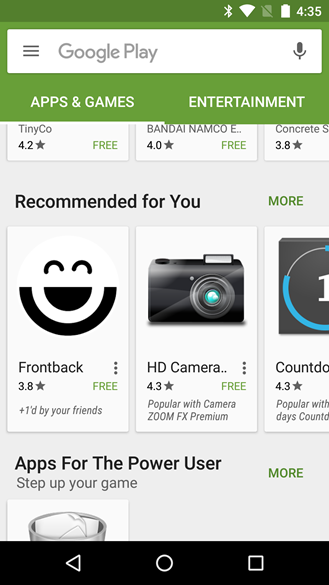 The notable addition in this version is a new toggle in Settings that gives Google the permission to provide app recommendations based on itineraries found in your Gmail account. What does that mean? You're probably going to see some pretty obvious stuff, like the app for an airline after you book a flight. Maybe you'll get language learning and translation apps if you're headed to a foreign country. Who knows, maybe a dinner reservation will earn a link to Yelp.

I think this is a pretty great idea, if for no other reason than it should lead to some recommendations based on something more useful than what our friends liked. I've had this version of the Play Store installed for a little over a day and I've yet to see a recommendation based on my email, so I'm not sure if this feature is actually active yet, but I also don't have a lot lined up for the next couple of weeks. Somebody with more immediate plans might have a better chance of seeing some results. 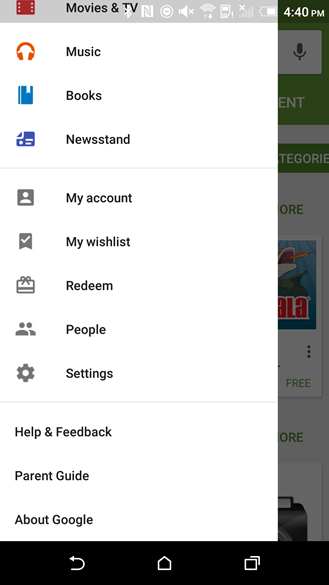 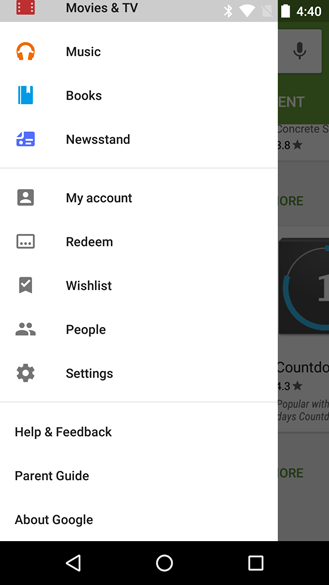 I doubt–even hope–that nobody cares about this, but we saw this and don't want to get too many tips about it. There are two trivial changes to the navigation drawer: "My wishlist" has been shortened to "Wishlist" and it has traded places with "Redeem." There's really nothing more to it, I've checked. Nevertheless, if you're actually using either of these options enough that you have some kind of muscle memory built up for where they are situated, this little change is gonna drive you nuts.

At this point, any regular reader already knows about the Family Library and Family Sharing. If you're not caught up, check out a previous Play Store teardown, Play Services teardown, the semi-related Play Music Family Play hands-on post, and even the very recent Play Books and Play Movies & TV teardowns. Actually, there are a few more, but they're just old and outdated at this point. The tl;dr is that we'll be able to share purchased content with family members.

Well, there are a few new strings in the latest Play Store update. Frankly, they don't add much, a couple of mundane details can be extracted. To begin with, as most of us probably would have assumed, any item shared in the Family Library will include a note about which family member shared the purchased item.

The second thing of note is that there will be a Family Library Settings screen and in it is an option to turn the Family Library on or off. This is probably just a device-specific toggle so users can hide potentially embarrassing purchases by other family members.

The Play Store often contains other well-hidden surprises, so keep an eye out for any other changes we may have missed.