Now that app updates are back to business as usual (more or less), Play Books is showing some activity again with a couple of small-ish changes that add a bit of polish. There are now shortcuts with links to different sections of the Play Store and an updated welcome card for the so-called Night Light feature. But the more interesting change is actually buried where it can't be seen in the live interface: some real signs that the Family Library is moving forward in Play Books. If you're looking for the APK, we have the link at the bottom. 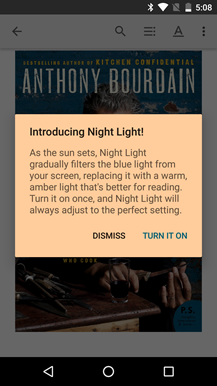 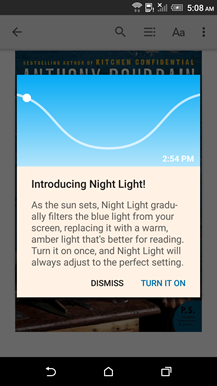 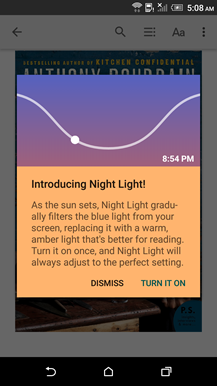 The visible changes in this version probably aren't all that exciting to most users, but it's worth looking at this one if for no other reason than how good of an example it is for communicating how things work to a user. The previous version of Play Books demonstrated the Night Light feature with a color-shifting dialog box that rolled through colors just a little too quickly. The new version eases back on the tempo of color change and matches it with an animation that shows the shift in the context of an animated daylight and darkness illustration.

If you're looking for Night Light on your device, be aware that it won't make itself known unless you are reading in the later hours, sometime after the sun has set.

Quick-Links To The Play Store 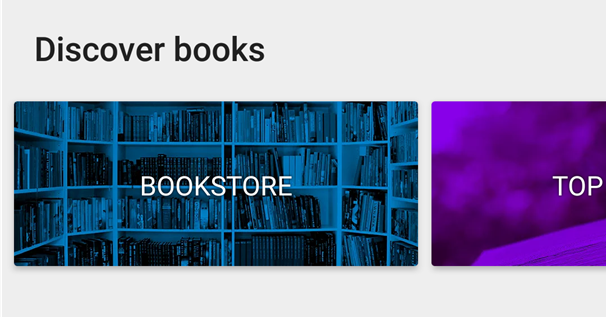 Play Books has always put some sort of effort into giving a few recommendations, but the Play Store is where all of the real shopping occurs. To make that a bit more obvious for users that don't know how things are organized, there is now a scrollable row dedicated for shortcuts into popular categories. Destinations include: Bookstore, Top Selling, New Releases, Genres, Romance, and Comics. Each opens the Play Store directly to the appropriate section. It's obviously not a big change, but might be a good hint for users that don't quite know their way around.

Back in November, teardowns of both the Play Store and Play services finally gave us evidence that users would eventually be able to share purchased content with trusted family members. Now some activity on the Family Library is showing up in Play Books as a few strings have been populated with meaningful text and a few new layouts have been added. The strings below actually existed originally as placeholders (note the "dummy" text), but have been renamed and include the obvious phrases that make them relevant.

Old Strings (these were replaced):

As I mentioned above, there are also new layouts. There's nothing particularly interesting about their content, but they are named family_cover and family_library_cluster. They will likely appear in the Read Now view, but may be used on the My Library page instead.

The Family Library isn't accessible in the current version, but it's clear Google has started preparing its content apps to launch the feature. I wouldn't be surprised to see the same strings turn up in Movies & TV, Music, and Newsstand in the coming weeks. I still wouldn't make a lot of bets about a Family Library launch in the very near future. There are still a few things I'd expect to see that haven't been implemented in currently available versions of apps. If I were calling odds, I'd sooner guess that the Family Library will be announced and launched at Google I/O—but that is just a guess.

Microsoft's Acquisition Of SwiftKey Is Official, Android App Will Still Be Actively Developed