Not all USB Type C cables are created equal. Some charge better than others. A number ignore USB spec so much that they run the risk of actually damaging your hardware. This could happen gradually, or in the worst-case scenario, it could be instant.

Googler Benson Leung has taken on the task of going through Amazon and reviewing whichever USB Type C cables he can get his hands on. We've recommended a number of them in past deals, feeling confident that we're steering readers in the direction of safe accessories. We don't test these products ourselves, so we consider what he does a real service.

Unfortunately, Leung may be taking an extended break. After plugging Surjtech's 3M USB A-to-C cable (the item shows up now as not available, but here's the 1M option you'll presumably also want to avoid) into his 2015 Chromebook Pixel and two USB-PD Sniffer devices, he says the latter failed immediately. Resetting the analyzer and reflashing the firmware did not bring the hardware back to life.

Worse, both USB Type C ports on his Pixel stopped responding right away. Neither would charge or act as a host. After rebooting, the Pixel entered recovery mode since it could not verify the Embedded Controller on the system. System recovery did not fix the problem.

Leung has torn down the killer cord and provided a couple pictures, along with some observations of the tomfoolery that went into the design of this product. 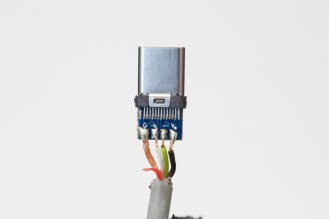 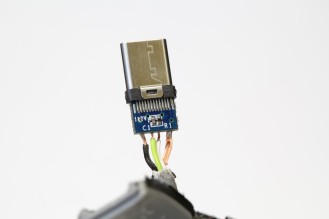 Leung has shared the news on his Google+ page. You can read his full first-hand account below.

Hi Benson here doing another USB Type-C legacy cable review. This one will probably be the last one I do for a little while because this cable (1-star review score, straight off) seriously damaged the laptop computer I am using for these reviews, a Chromebook Pixel 2015, and two USB PD Sniffer devices (Twinkie).

I plugged this cable into the twinkie (as a pass through) and my Chromebook Pixel 2015 and the A end into a 1st party Apple 12W iPad charger.

Twinkie's current and voltage measurement command (tw vbus) failed immediately after plugging this cable with the adapter into it. This is permanent damage. I tried resetting the Twinkie analyzer and having the firmware reflashed, but it continues to exhibit this failure. It is no longer able to use its voltage and current measurement capability on the Vbus line.

On my Pixel, both USB Type-C ports stopped responding immediately. Neither would charge or act as a host when I plugged in a USB device such as an ethernet adapter. Upon rebooting my Pixel, the system came up in recovery mode because it could not verify the Embedded Controller on the system. No amount of software recovery could revive the EC. Upon closer analysis, serious damage has been done to components related to charging and managing the USB Type-C port's capabilities.

This is a total recipie for disaster and I have 3 pieces of electronics dead to show for it, my Pixel 2015, and two USB PD analyzers.

Needless to say, this cable is fundamentally dangerous. Do not buy this under any circumstances. I will be contacting Surjtech directly shortly.