An article on PC Mag published earlier today claims that US Mobile is the "first legit" Xiaomi and Meizu carrier in America. This is, frankly, misleading. To clarify immediately: some US T-Mobile MVNO that no one has heard of is working with an electronics distributor in Hong Kong to sell gray market Xiaomi and Meizu devices on its online store, and they don't even support US LTE bands.

As you can see, that quickly makes use of the word "legit" to describe US Mobile's relationship with Xiaomi or Meizu devices highly questionable in any context but "the phones were not stolen." It's clear that US Mobile almost certainly does not have a legitimate relationship with either brand, and instead managed to swing an impressively high-profile news story out of selling some imported gray market smartphones with no LTE, phones which you can't even buy anymore because US Mobile claims they're "sold out." I'm not sure why "sold out" would lead them to take down the product pages entirely, but whatever.

Ron Amadeo of Ars Technica posted a pretty good breakdown on reddit of just why to be suspicious of this "announcement," but it really boils down to two pieces of information. First, this line in the original PC Mag story.

Khattak promises an ongoing relationship with Xiaomi and Meizu distributors.

Which suggests that US Mobile is not working directly with Xiaomi or Meizu, and then this bit of info Ron uncovered which confirms it:

2) Find one of these phones on US Mobile's site and you'll see "Sold and Fulfilled by Omni Electronics HK," an importer.

Unfortunately, the links to those device pages are now down, but there is a cached version! (Thanks, Ron.) 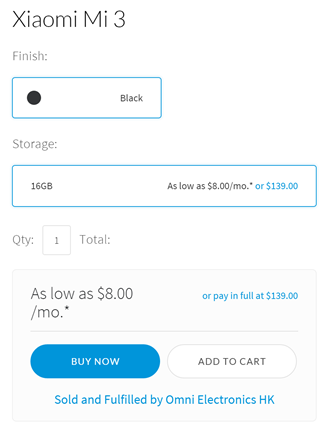 Growing excitement over Xiaomi launching in the west - something it has never put a timeframe to - among journalists and phone enthusiasts alike probably has us all a little trigger-happy, and it seems the CEO of US Mobile, Ahmed Khattak, is well aware of this.

US Mobile has published a blog post saying it will no longer be selling the devices after T-Mobile intimated that it would drop the MVNO's wholesale service agreement for selling devices it hadn't tested on its network. US Mobile says it will attempt to get the devices certified so it can start selling them again, but I have my doubts as to whether or not they'll be successful. Additionally, Xiaomi reached out to us this morning to clarify that, yes, US Mobile has abso-freaking-lutely nothing to do with their company.

So that's that: a low-profile MVNO tried to raise its profile by essentially misleading a journalist into thinking they would be the first "legit" seller of Xiaomi phones in America, and the resultant whiplash should make them think twice about ever pulling such a stunt again.

Google Parent Company Alphabet Is, For The Moment, The Most Valuable Company On Earth