AT CES earlier this month, Blu announced two new phones: the Vivo 5 and Vivo XL. Today, we're taking a closer look at the lower-end of the two, the Vivo XL, which is the first one to hit the market. This one isn't a dramatic difference from some of the other more recent stuff we've seen from Blu — like the Life One X, for example — but it does continue the company tradition of offering a lot of phone for the money.

Under the hood, it's actually a lot like the aforementioned Life One X, though it does have a slightly larger, lower-resolution display. Here's a look at what it's packing: 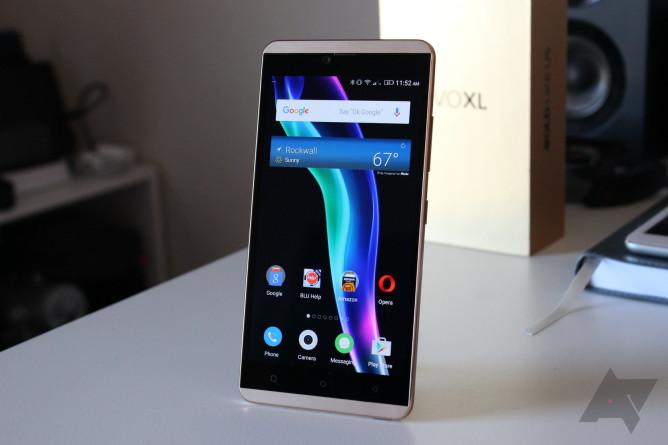 Gold. That's the first thing that went through my mind when I saw the Vivo XL — hell, even the box is all gold. I imagine the Midnight Blue model isn't quite as eye-catching, but my review unit is Solid Gold, so that's what we're talking about. Surprisingly, it actually looks pretty good.

The back is easily the most visually striking part of the phone's design, because it was inspired by liquid metal. It has an interesting weave pattern across the entire back that's both minimal and unique — definitely something that's going to be hit or miss with most people. I don't think it's ugly at all, but it definitely takes some getting used to, both in look and feel. It's ultra smooth, but somehow still slightly tacky, so it feels pretty good, albeit kind of…cheap? There's a bit of flex in the back piece on my review unit, though it's only in one small spot near the right edge, so I'm inclined to believe this isn't something that all units will have. I may have just been too rough when taking the back off to put the battery in when I first got the unit. 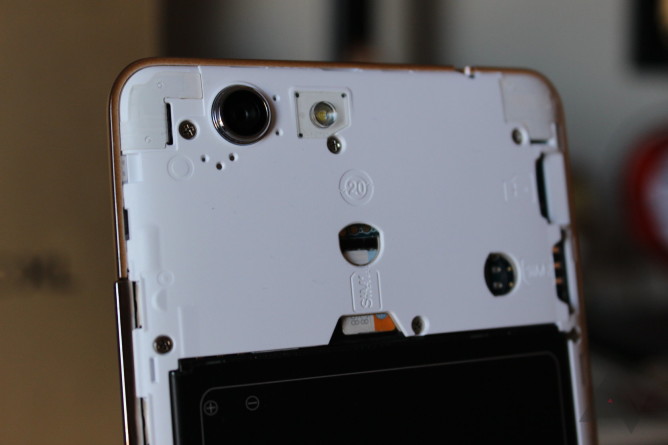 The front of the device is also gold, which gives it a very standout appearance in my opinion. It has an RGB notification light at the top just beside the 5MP front camera, and capacitive navigation buttons at the bottom. I really don't like capacitive buttons to begin with, but it makes it even harder to deal with when they're basically backwards. Android devices with software buttons are laid out back, home, recent; the Vivo XL is recent, home, back. It kind of drives me nuts. I will always prefer on-screen buttons. Always.

Otherwise, the most notable thing about the device's hardware is the USB Type-C port. Over the next year, Type-C will easily become the new standard on pretty much all Android devices, so it's nice to see Blu getting on board with this new tech early on. Having only one or two Type-C cables is the most frustrating thing anyone will have to deal with when it comes to making the switch, because if you're like me you already have microUSB cables everywhere. Still, USB-C is definitely a step forward; not having to actually look at the port for correct orientation is a great feeling. 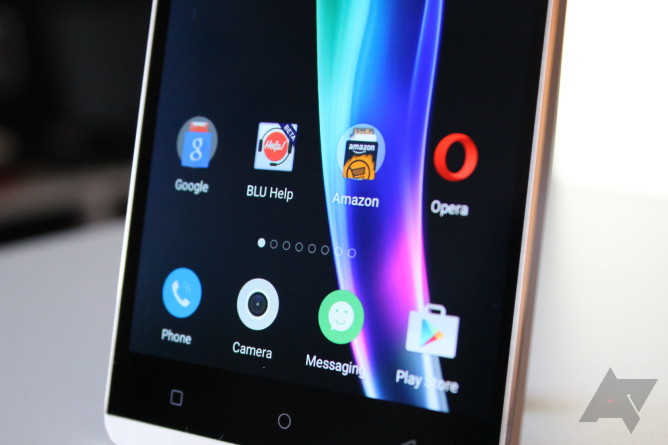 One interesting choice — perhaps even disappointing to some — is the phone's 720p display. It's a 5.5-inch panel with a 720p resolution, which is incredibly low by today's standards; in fact, the recently-released Life One X even comes with a 1080p panel (at the same price, no less). Still, the VXL's display has 267 pixels-per-inch, which is comparable to an eight-inch tablet at 1080p, and I'd be willing to bet that most people wouldn't guess it's just 720p by just looking at it. But after closely comparing it to the Life One X's 1080p 5.2-inch display, there is a noticeable difference in sharpness, mostly when it comes to text. Still, I don't think I'd call the resolution a dealbreaker — it's probably fine for everyone aside from the most picky of users.

Color reproduction is also very good on the VXL. It has a Super AMOLED panel, so it's nice and vibrant but not overly saturated like many SAMOLED panels can be (especially on cheaper handsets). Compared to the Nexus 6, the VXL's display is actually quite a bit nicer when it comes to color balance, as the whites aren't nearly as dingy or yellowed. Some colors can be a bit too dramatic, like the green in the Play Store, for example. It's almost a neon lime on the VXL, where it's slightly more subtle on the Life One X and Nexus 6 displays. Otherwise, colors look great on this phone.

Considering this phone has a 5.5-inch screen, I was surprised to see how tall it actually is — it's about the same height as the Nexus 6, though slightly more narrow. The increased height is undoubtedly because of the capacitive buttons, but that's where the biggest argument for hardware buttons comes into play: there's more usable space on the same size display versus having software navigation buttons. Of course, the cost there is that the overall device is larger. It's a coin toss.

Lastly, I want to touch on the camera.

From what I can tell, the Vivo XL has the same camera that's in the Life One X, save for slightly different software. The stock camera app on the Vivo XL is a little more feature-rich than what I've seen on other Blu phones (or other phones in general, really), with tons of different shooting modes like Professional, Face Beauty, Magic Focus, Filter, HDR, and a few others. Here are some screenshots of the different camera modes, as well as some unmodified sample shots just below. Overall, I found the camera to be pretty good for a $149 phone, though it's kind of lacking in less-than-perfect lighting conditions. The VXL’s software is interesting, because it’s sort of like other Blu phones, but not really. It’s not stock Android like many of the company’s handsets, and the software layer is very similar to what we’ve seen before, only with a handful of changes. I can’t really say if it’s better or worse than some of the others…just different. And sort of annoying at times. 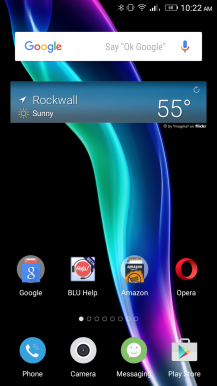 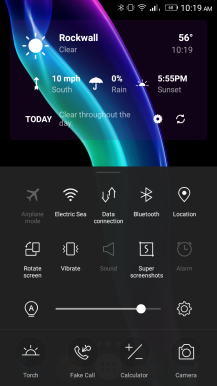 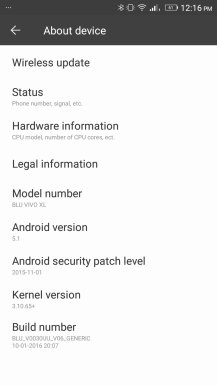 First off, it uses the Carefree Launcher that we’ve seen on other Blu phones — the one that stuffs every app icon on the homescreens with no way of automatically sorting them. It basically drives me insane, and I tried to use it with the stock launcher for a few days, but I just couldn’t. I tried to do it for you guys, but in the end I gave up and switched to Nova. I really just don’t like that launcher, and I don’t think that most people who are used to using Android will, either. It’s just…bad. The good news is that it’s an easy switch, so it’s really not a big deal.

The one thing that threw me for a loop when I first started using this phone was the lack of a quick settings shade. The only thing in the notification shade is a little icon that leads to a section called "Notice Management." Basically, notifications are separated into two sections on the VXL: "Important" and "other." Most installed apps default to other, while pre-installed apps like Calendar and Gmail get the important label. It's kind of dumb, honestly.

So where's all the useful stuff: settings, Wi-Fi, Bluetooth, brightness, etc.? At the bottom. There's a feature called Control Center on the VXL, which is basically a full-featured slide-up menu a la iPhone. A quick swipe up from the bottom will bring up the Control Center, where you'll find all the toggles that would usually be in the quick settings shade on most Android devices. There are also a few other features thrown in here, like Super Screenshots that allow users to grab screenshots of up to 10 pages long (it scrolls automatically), as well as a Fake Call button that will ring the phone. The best part of Fake Call is what happens when you answer: there's a female voice on the other end that says "Hi, can you send me that file as soon as possible, please?" It's hilarious.

While I don't dislike the Control Center, it does take a bit of getting used to. iOS converts will probably appreciate how similar it is to what they're used to, but as a long-time Android user, I find it strange and uncomfortable.

The settings menu is that same weird orange and white thing we've seen from Blu before; the one that puts some stuff in one menu and some stuff under "advanced" settings. I still don't understand why there's a need to separate things like that — it just adds unnecessary fluff and convolutes the settings menu in general.

Under the advanced section of the menu, however, you'll find a few of the extra tweaks on this phone: smart gestures, black screen gestures, the "suspend option" button, LED light settings, scheduled power, and "permissions of app." All stuff that we've seen on Blu devices before — some pretty useful stuff here for those who choose to use it.

The Vivo XL has the same processor in it as the 2015 Life One X (which I really liked), so the performance is basically on par. I actually expected it to be a little faster/smoother/better than the LOX because of the lower screen resolution, but it's about the same. In fact, it actually scores slightly lower on certain benchmarks — it's not a significant difference, but I was still shocked. In the real world, though, I didn't notice any difference at all compared to the LOX.

Speaking of benchmarks, here's a look at how the VXL performs on paper: 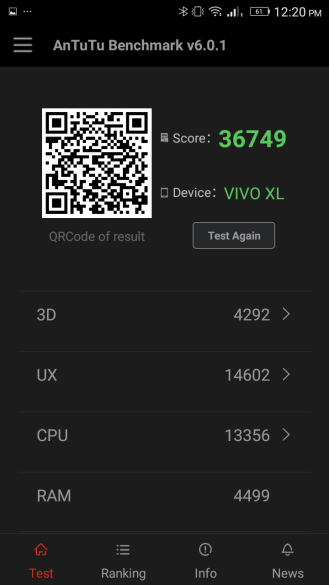 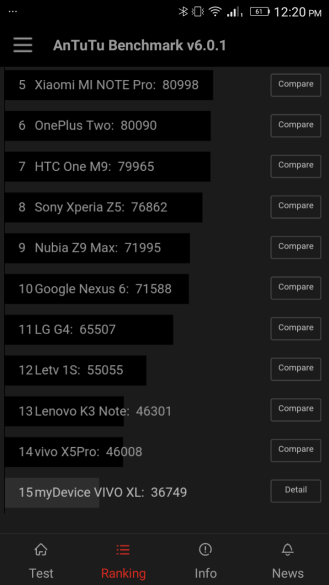 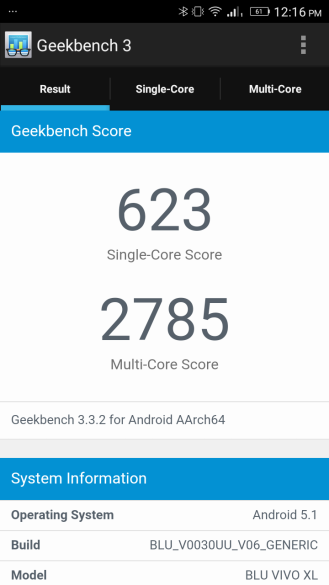 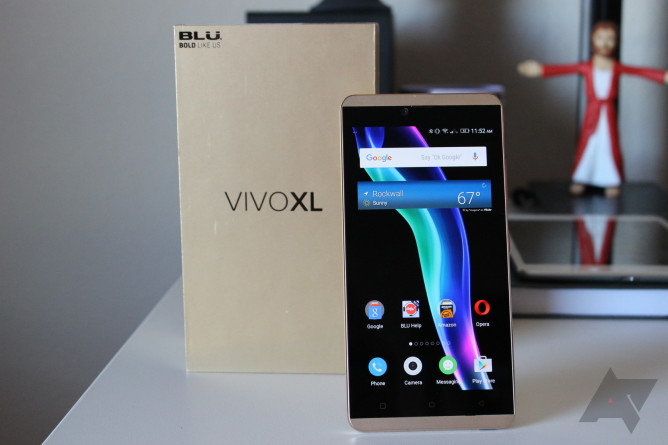 When I reviewed the Life One X back in December, I called it the "perfect balance between price and performance," and I still agree with that. By comparison, the Vivo XL should also fit this description, since it's the same price and has essentially the same hardware. The main hardware difference between the two is that the LOX has a 5.2-inch 1080p display, where the VXL has a 5.5-inch 720p panel.

The biggest change, however, is easy to spot: it's all in the software. Where the LOX is essentially stock Android with a few useful (but minimal) tweaks, the VXL is quite different — it has a customized settings menu and notification shade, the quick settings panel is moved to the bottom Control Center, and it uses the Carefree Launcher that we've seen on other Blu phones. It's pretty different, even after putting Nova on both phones.

For the first three days of its availability, the Vivo XL is getting the same $50 price-drop treatment that we first saw with the Life One X: it will only be $99. For everything this phone offers, this is a killer deal. After this weekend, it goes back to the full MSRP of $149, so if you plan on buying, you should definitely do it before Sunday night.

But that's the question. If you're looking for an affordable phone, do you buy this or the Life One X? Really, it comes down to two things: screen size/pixel density and price. Right now, the Life One X is $149 and the Vivo XL is $99 — if you can handle the software modifications (which really aren't that bad) and don't mind the slightly lower-resolution display, then go for the VXL. The performance is nearly identical, and it shouldn't leave you wanting anything at this price point.

If you're not keen on the idea of a 5.5-inch 720p display, though, then you'll want to drop $149 on the Life One X. No question about it. The good news is that you really can't make a "wrong" choice here — they're both great phones at this price point, and both offer a ton of value for the money.