Previously, the Play Store would show a small thumbs up / thumbs down icon next to each review where you could quickly give feedback on whether or not it's useful. Now, the thumbs down icon is completely gone and the thumbs up has grown to take the entire space. Also new is a small overflow menu next to it where you could mark the review as spam. I suppose that it makes sense to rate reviews based on whether they are helpful, and the rest can go in the not-so-helpful pile in Google's algorithms. And if something is worthy of a spam label, it gets it. 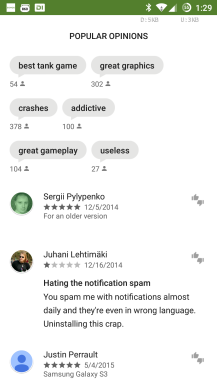 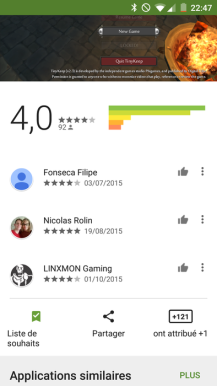 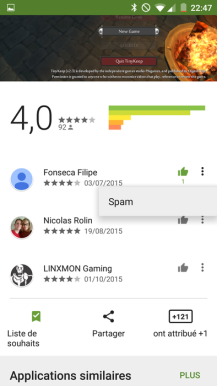 The change was spotted by a few users in testing several months ago, but judging by the tips we're getting, it appears to have gone live in a wide rollout recently. It's only visible on the Android version of the Play Store — the website still shows a flag / thumbs up / thumbs down feedback system.

Hangouts v7.0 Is Rolling Out With Quick Reply, A Suspicious Google Messenger SMS Pop Up, And ...

The 'Until Next Alarm' Bug In Do Not Disturb Mode Returns, Will Probably Be There Until Google ...