Considering its reliance on many, many balls, Verizon's latest network comparison ad is fairly innocuous. It uses statistics from a Root Metrics study to boast about Verizon's wireless coverage and performance in relation to its competitors AT&T, Sprint, and T-Mobile. The ad is obviously intended to make Verizon look good, and the combination of a condescending voice-over and an elaborate visualization are particularly disparaging to the cheaper, smaller networks. T-Mobile took exception, noting that Verizon paid Root Metrics for the study and didn't account for some of the company's newer network upgrades, in a CinemaSins-style debunk video.

Now Sprint has decided that it also needs to defend its honor. The company pulled out data from another independent study (this time from Nielson) to demonstrate that Sprint's LTE network is the fastest in the land, redoing the Verizon ball advertisement with a reshuffling of the representative data. You might say that Sprint got its balls in a twist. (Last ball pun, I promise.) The commercial goes on to highlight Sprint's current 50% off promotion. Nationwide syndication begins with today's NFL playoff games - watch the ad below.

But hold on a moment. In the same way that T-Mobile never actually calls the pro-Verizon study data wrong, merely outdated, Sprint's ad also omits certain truths. Specifically, Verizon's original ad never claimed to be faster, on LTE or otherwise - it was about nationwide reliability and coverage, a metric in which Sprint is notably lacking. To use a football metaphor, that's what they call "moving the goalposts." And if I was a Sprint advertiser, I wouldn't be so quick to throw stones... especially when some of Sprint's other ads use rather questionable imagery to imply that its network is better than it actually is. 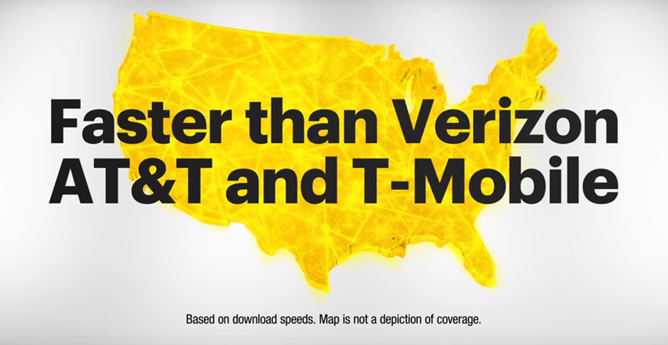 See this still from one of the currently-running Sprint ads? It looks like a wireless coverage map, since it's map-shaped and covered in Sprint yellow. But the tiny-type (the stuff you're supposed to ignore in a lightning cut) clearly states that this map is not a coverage map. Presumably it's just a decorative graphic. But its placement in a nationwide advertising campaign, where bigger and more confident companies like Verizon and AT&T like to stick their big, colorful maps is rather suggestive. I have no particular love for Verizon (in fact I love to give them some much-deserved flack for their anti-consumer policies), but let's not pretend that any of these huge wireless carriers are particularly virtuous when it comes to presenting clear and unbiased data in advertising.

So remember wireless customer, don't be too quick to trust any carrier's commercial, even when they're ostensibly laying down "the truth" on a competitor. Recall the apocryphal Mark Twain quote: there are lies, damned lies, and statistics. And apparently, lots and lots of balls.

Hey look, T-Mobile has another ballsy ad airing during today's football games, this time telling you how they're now only a tiny bit worse than Verizon, because of balls. To give credit where it's due, T-Mobile had the balls to put up a coverage map in its commercial... even if the implication that all of its coverage is LTE (which it isn't) is something of a misdirection.

Now all we need is for AT&T to join the fray, presumably with big, blue balls. Balls balls balls. Thanks to commenter Rhinopotamus for pointing out the new T-Mo ad. Balls.