Finding stuff to listen to is difficult work. I mean, it must be. More folks have sat around thinking up yet one more way for helping consumers discover music differently than have put their talents toward developing a decent mobile office suite or a way for users to back up app save data without having to void warranties. For those of you who have made Spotify your music-finding solution of choice, Starbucks is offering something aside from a cup of coffee and a breakfast sandwich.

Now you can use your mobile phone to see what music is playing in the background and grab a copy of the playlist. 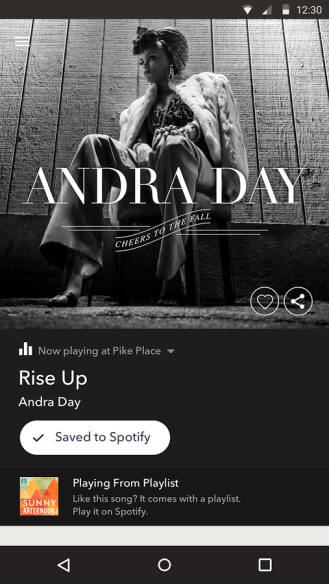 The Android app's Play Store page is already showing the new feature. Those of you who aren't already using the app, which also lets you make purchases ahead of time, can grab it from the link below.

What's New:
The Sound of Starbucks
Now, you can discover music playing in participating U.S. Starbucks stores*, save songs to a playlist on Spotify and take the music with you when you leave. Location services must be enabled to use this feature.**
*This functionality and in-store overhead music experience provided by Starbucks.
**Continued use of GPS running in the background can decrease battery life.
Thank you for all your feedback!

As of this release, Starbucks Mobile Order & Pay has expanded to participating stores in Canada and the UK. New Era of Music Debuts at Starbucks with Spotify

10M-Member My Starbucks Rewards® Loyalty Program and Spotify Users Can Now Discover, Save and Take Starbucks Curated Content with Them

“Music has played a pivotal role in our stores for over forty years and we have been at the forefront of how to integrate it into a retail environment,” said Howard Schultz, chairman and ceo of Starbucks. “Today is the next era in that experience. We are merging the physical and digital, providing new access points for Spotify as they continue to grow globally, placing more control into our customers’ hands and giving artists the world’s largest stage for them to share their talent.”

The new Starbucks music platform is available to both iPhone and Android users within Starbucks Mobile App, offering customers the personalized experience they have come to expect from both companies. In addition to being able to discover music playing overhead at a participating Starbucks store, Starbucks Mobile App users will now be able to view recently played songs, save songs to a personal playlist on Spotify, “Love” songs to influence future Starbucks playlists as well as share these songs on social networks and “Play on Spotify.” Spotify users can also find new playlists from Starbucks as well as Starbucks most popular music from the past 20 years on Spotify. These features are accessible on Spotify’s Free and Premium services.

“Starbucks shares our passion for music and desire to create the best, personalized experience for users and customers,” said Daniel Ek, CEO of Spotify. “Together with Starbucks, we’re creating a unique new digital music experience that offers Starbucks customers and Spotify users the ability to discover even more music at Starbucks and enjoy that same music and more on Spotify, whenever they want and wherever they are.”

Starting in January, Starbucks will also begin a new weekly feature in the Starbucks app highlighting both established and emerging artists, as well as curated playlists giving musicians a new way to reach millions of customers across the U.S. Starbucks partners have also begun influencing the music played in their stores by choosing from a variety of Starbucks curated playlists and creating “Store Favorites” playlist. This is made possible via a mobile app, powered by a new, PlayNetwork CURIO hardware device that delivers branded entertainment and media to retail stores.

For more than four decades, Starbucks has built a differentiated third place experience with music at the heart of its coffeehouse culture. In 1994, a dedicated entertainment team began selecting original CDs spanning a diversity of musical genres and geographies. This program has spotlighted the extraordinary careers of legendary artists such as the late John Lennon, Aretha Franklin and Bonnie Raitt, among many others. Bob Dylan, Yo-Yo Ma, the Rolling Stones and Ray Charles are among the legends who identified their favorite recordings for Starbucks® Artist Choice series. Starbucks seasonal CDs have celebrated moments ranging from Valentine’s Day to summer road trips to holiday festivities. Starbucks has also become a champion of once emerging artists such as John Legend, Madeleine Peyroux and Fleet Foxes, introducing customers to these musicians at an early point in their careers.

1 Data connection may be required

[Deal Alert] iOrange-E Again Has Coupon Codes For Its Braided USB Type-C Cables, Except This ...