You can expect a smartphone to come with camera and gallery apps of its own. The manufacturer may also make the time to produce something for taking notes or doodling. Then there are news apps. These aren't guaranteed to appear, and those that come pre-installed take various forms. In Sony's case, there's Socialife, which now has the more straightforward name News Suite. This change comes as part of a big overhaul that made its way into the Play Store.

The updated app pushes everything into two tabs. There's News containing topics and events from across the world. Then there's My Feeds, which groups together content that interests you specifically. It's not a particularly thorough news aggregator, but you can search for and add keywords that home in on the stuff that makes you passionate. Since you're reading this post, I'm thinking "Android" might be a good place to start. 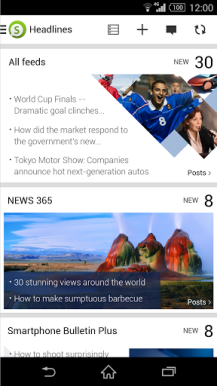 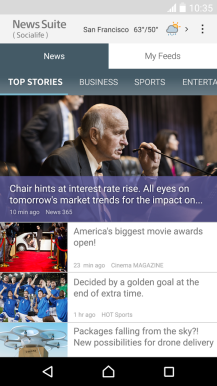 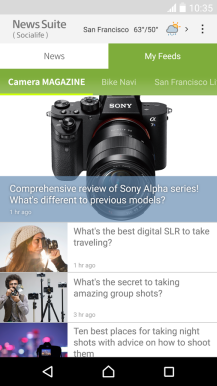 The app remains free to use, and you don't need a Sony device to start a download using the link below. 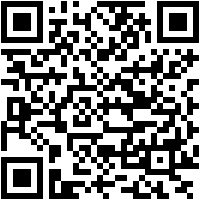 Sony Launches "News Suite," 2-in-1 Free News App for Android: Efficient Way to Check News That Matters to You

With News Suite, users can select the news media they're interested in and customize how it's acquired, just as before, but the app also boasts the new feature of genre-based news pages.

The User Interface (UI) has also been rebooted with a new two-tab system -- the "News" tab features general news from around the world organized by genre, and the "My Feeds" tab gathers together news and blog posts that users are interested in -- allowing general and personalized news to be viewed separately. Users can efficiently and quickly get to grips with news on a wide scale, and the personalized news they want to read up on in more depth is just a tab away.

1. Efficiently get hold of the information you want, just by switching between the "News" and "My Feeds" tabs

News Suite features a two-tab system to deliver users the best of both worlds: the "News" tab provides a breakdown of general news organized by genre, and the customizable "My Feeds" tab allows users to choose the content they want to see most. It's quick and easy to switch between two experiences. Users can get an instant grasp on current events, for example, followed by reading up on the news that's relevant to their interests and posts from their favorite artists just by switching over to the "My Feeds" tab.

2. Speedily get to grips with general news with the addition of genre-organized news feeds

Users can view news articles organized by such genres as Entertainment, Sports, Business, Food, and Technology to get an instant grasp on what's happening in the world, as it happens. Catch up on fresh and recent news with high-speed vertical scrolling. Flick to the left or right to easily switch genres with just one hand.

3. Easily view articles that match your interests with the "My Feeds" tab

The "My Feeds" tab lets you gather and enjoy all the news you care about. To customize, select from the news catalog (RSS list) or simply input keywords such as the names of your favorite teams or movie stars. A variety of articles will be retrieved and accumulated for a single keyword, allowing you to see developments for that keyword over time.

The app also allows you to easily check the weather in your city.

News Suite (formerly Socialife News) is presently installed on a total of 40 million devices across 70 countries, and is well used by 6 million users a month.

[Deal Alert] The Nexus Player Is Sold Out All Over The Place, But Best Buy Has It In Stock And ...