I'm an Amazon Prime subscriber, but I don't watch any of the company's shows. Heck, I forget the option exists. No matter, Amazon already has my money. The online retailer/TV production company is after other folks, and so it's dropping the price of Amazon Prime to $73 this weekend (from $99). If, like me, that number seems odd to you, then you're probably equally unaware that the 73rd Annual Golden Globe Awards aired this week, and that Amazon's Mozart In The Jungle won an award for Best Musical or Comedy Series (with its lead actor Gael García Bernal earning Best Actor in a Musical or Comedy Series).

Psst, Amazon, yeah, I told everyone about your show. Mmhmm. Yeah, I think they heard me. Mmhmm, eh, the people who cared already knew. Oh, right, I forgot that part. Hold on a second.

Whether you're an Amazon Prime subscriber or not, from Friday 15th at 9PM PT until 11:59PM local time January 17th, you can watch the first and second seasons of Amazon's show for free using the Amazon Video app or your desktop browser.

Alright, I'm back. Thanks for being patient. Amazon loves to promote its shows. I'm ambivalent toward them, but that free and speedy shipping is a great way to get Android gadgets. If you want in on that action, this weekend is a decent time to save money signing up for a year of Prime.

The $73 deal is live. Go get yourself some cheap Prime. 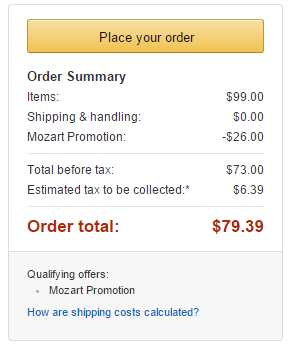 In Celebration of Golden Globe Wins, Amazon is Making All Episodes from Seasons One and Two of Mozart in the Jungle Free to Watch – No Membership Required

Starting Friday January 15, at 9:00 p.m. PT and concluding at 11:59 p.m. local time, Sunday January 17, everyone can watch Mozart in the Jungle for free via the Amazon Video app for TVs, connected devices and mobile devices, or online at Amazon.com/mozartinthejungle

Amazon will also offer Amazon Prime for just $73 starting this Friday at 9:00 p.m. PT in celebration of its wins at the 73rd Annual Golden Globe Awards

“What an incredible honor to be recognized by the Hollywood Foreign Press two years in a row,” said Roy Price, Vice President of Amazon Studios. “We are incredibly proud of Gael, Jason, Roman, Paul and everyone involved in the making of Mozart in the Jungle – it’s gratifying and exciting to see the success of this series.”

In addition to SD and HD, the series is also available in 4K Ultra HD on Amazon Fire TV and compatible Samsung, LG and Sony smart TVs and in High Dynamic Range (HDR) on compatible Samsung and LG smart TVs. Prime members can also download the series for offline viewing on iOS, Android, and Fire devices at no additional cost.

Hands-On With Jide Remix 2.0 For PCs: A Promising Start For Android On The Desktop