When OPPO announced the F1 at the start of this year's CES, it didn't include much in the way of details. Now the device is available for pre-order. It costs $249, €229, or the equivalent in your local currency. To reserve a unit, OPPO wants a $5/€5 deposit. OPPO says some units will go out in early February. 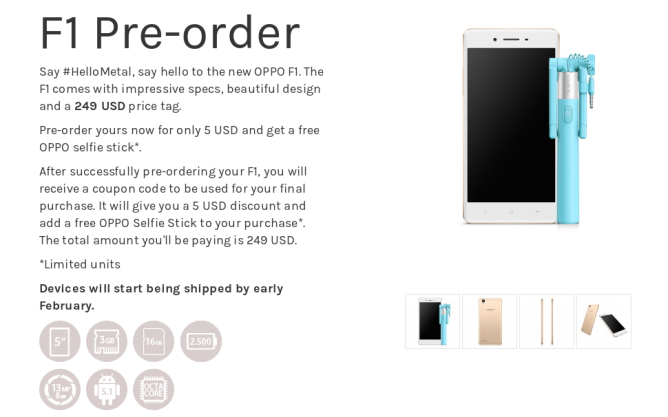 With this mid-range device, OPPO wants to give customers a solid camera experience at a lower price point. So buyers get a 13MP rear-facing camera paired with an 8MP front-facing one. On paper, these specs exceed what you would find on an OPPO Find 7, which costs at least twice as much. That said, you will view those shots on a smaller 5-inch screen with a lower 1280 by 720 resolution.

The F1 isn't just about cameras. To class things up further, this is a metal device.

The operating system is Android 5.1 running OPPO's ColorOS. A Qualcomm Snapdragon 616 powers it all, supplemented by 3GB of RAM and a 2,500mAh battery. Files sit on 16GB of internal storage and an optional microSD card. Almost all of this matches what we saw in the OPPO R7.

OPPO is launching the F1 in 20 countries. Target markets in include Europe, the Middle East, North Africa, South Asia, and Southeast Asia. Pre-orders are expected to arrive in early February.

[Android Police Podcast] Episode 191: The G5 Jack In The Box