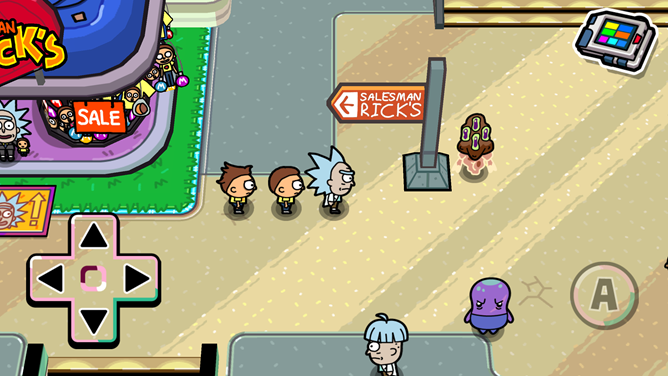 Let's back up. A big part of the show's appeal is how the narcissistic and abusive mad scientist Rick travels to other dimensions and timelines with his portal gun, in a pop science version of the many worlds interpretation of quantum physics. So within the world of the show, there are a nearly infinite number of grandpa Rick and his put-upon sidekick Morty, hundreds of which are seen, and of which "our" Rick & Morty (from Dimension C-137) are allegedly the "Rickest Rick" and the "Mortiest Morty." The Pocket Mortys game takes this concept and runs with it: you play as the primary Rick, who uses his Morty to fight other Ricks and their Mortys. You can also collect a wide variety of alternate universe Mortys, like Cowboy Morty, Cronenberg Morty, Robot Morty, et cetera. Some of them are actually seen in the show, while some are brand new for the game.

Yes, the mobile game is set up quite a lot like Pokemon: each enslaved Morty has four attacks, they can learn new attacks (but never more than four) and "evolve" into more powerful versions. You roam the various locations from the TV show, encountering alternate Ricks and other bad guys who will inevitably challenge you once you cross their line of sight. There's a leveling system for Mortys, items to collect and craft, and you journey to challenge the Elite Four, er, I mean the Council of Ricks to beat the game. The setup apes Pokemon in pretty much every way, though it's more cruel - you "capture" other Mortys with a brain control chip instead of a Pokeball, for example, and the myriad Pokemon elemental types are rather sarcastically simplified to rock, paper, scissors.

If the concept of enslaving multiverse alternates of your teenage grandson and forcing them to fight for your amusement is somewhat disturbing... then you probably haven't seen many Rick & Morty episodes. The game is positively tame by comparison. But fans who enjoy the dark and varied humor of the show will spot plenty of familiar characters and locations, and the dialog (including a few voiced lines from show creator Justin Roiland) is spot-on. The music even takes the catchy tunes from the show and adapts them into Game Boy-style chiptune versions. At the moment the game has "over 70 Mortys" to catch and collect. 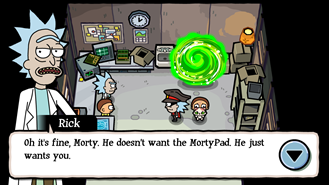 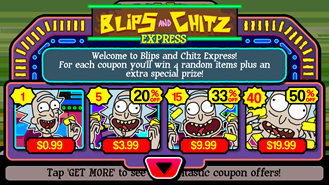 Pocket Mortys is free with an in-app purchase lotto system, Blips & Chitz, that lets you buy tickets to win random items and extra Mortys. You can also watch ads to boost the in-game currency, Shmeckles, for free. Neither of them seem particularly necessary to get the whole experience. And by the way, despite the cartoony look, neither this game nor the show itself are kid-friendly.