Pushbullet began as a quick way to send files, links, and other data from one device to another. Along the way, the team took the infrastructure it had in place and introduced instant messaging (through a phone using SMS). Last month the feature grew to include group conversations. Today, the service has evolved to support sending picture messages.

When you drag an image into a SMS conversation, Pushbullet will now convert the message to MMS. People on the other end will receive the message without any sign that you sent it from a computer, like text-only messages. 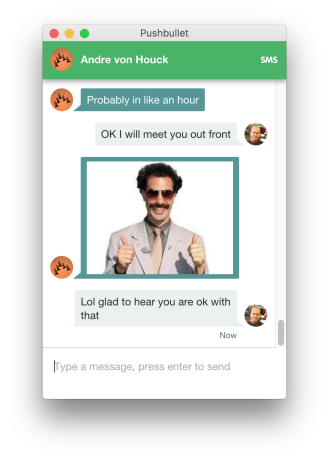 The Pushbullet developers say they have also made sending SMS more reliable across the board. This effort results from messages failing to send if Pushbullet failed to establish a connection to a phone in time. Now the site will sync messages to your device so that, even if they can't be sent immediately, they will eventually go out as soon as they can.

The update is going live in the Android phone (v17.6) and Windows versions of the app, along with the Chrome extension. Android tablet and Firefox updates are on the way.