When we wrote about our favorite apps to use during 2015, one of my picks was Enpass Password Manager. Many of you had lots of questions about that choice, asking me to explain my reasoning behind not liking LastPass or to compare Enpass to other similar solutions. If you were intrigued by Enpass then and wanted to either give it a try or at least look into how it works, now's your chance to do so. Enpass' Pro mobile license is free to unlock today on Android and all I can say is that I've been happy with it for almost a year and I don't regret plucking the full $9.99.

All you have to do to get your free license today is download the app, say you're a new user, enter a master password for it (which you'll later use to unlock your sensitive data), then you'll be immediately asked if you'd like to unlock the Pro version. Pick a Google account and the license will be attached to it so you can use it on any other Android device. The promo comes courtesy of myAppFree but you don't need that installed to get the offer. 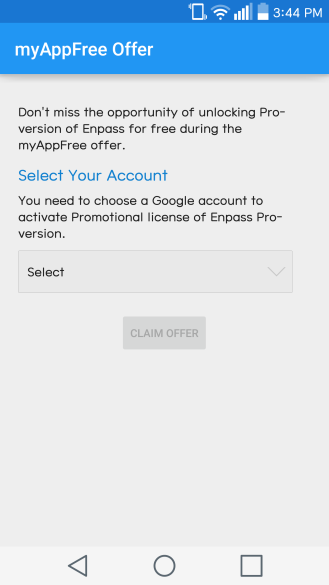 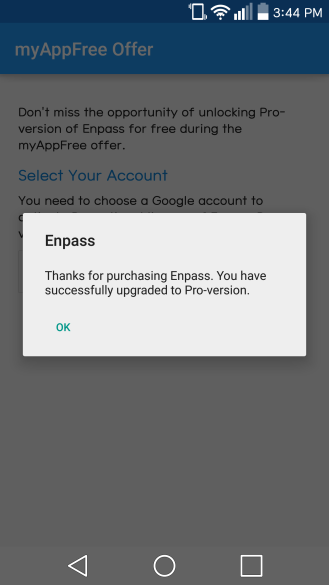 The app uses regular fonts, but I had to use a friend's customized device to get a new Pro license.

Enpass is a password manager akin to KeePass and SafeInCloud. It doesn't require an account or a subscription. None of your data is sitting somewhere behind a simple username and password. Instead, all of your entered logins, licenses, financial info, and other sensitive data reside in an encrypted file that the app can only access once you enter the master password. The file can be used locally only, backed-up and restored on demand on other devices via Wi-Fi. It can also be sync'ed across Google Drive, Dropbox, your own WebDAV, and a few other services. These, however, never have access to what's inside. I like that approach much more than I do LastPass and Dashlane. Maybe it's a false sense of security, but it just sits better with me.

And Enpass does everything else right by my book. It's free on the desktop, unlike 1Password for example, and is available for Windows, Mac, and Linux, with a Chrome extension. It also uses keyboard shortcuts, a must for any desktop app I use. On mobile, it's free for 20 logins and the pro license is $9.99 paid once. It's available for Android, iOS, and even Windows Phone and Blackberry. The Android app looks great, has fingerprint unlocking on Marshmallow, auto-locking when not in use, hidden passwords, customizable folders, card types, and fields, and a built-in browser.

The only downside is that it doesn't have a LastPass-like app fill-in and browser form fill-in. I can live with that, but you may not be able to. The good thing is that it won't cost you to see how well it works or whether or not you can adapt. I'm not sure how long the offer will be valid though, so you better hop on it fast before it no longer works.