Android's Smart Lock is a great way to save a little hassle when users are around familiar locations or connected devices. The default system version of the feature skips the lockscreen when the phone or tablet detects that it's in a safe location, and last year Google did much the same thing for apps, essentially turning Smart Lock into a password manager for supported applications. While Netflix has supported this feature for months on its standard Android app, the latest update to the Android TV version brings it in line.

To see Smart Lock in action, make sure that you already have your Netflix username and password saved in Smart Lock on a phone or tablet - if it's been a while, you may need to log out on your phone, then log back in and enable the Smart Lock feature when it appears. Now switch over to your Android TV device, make sure the Netflix app is updated to the latest version (it doesn't seem to be a staggered rollout), and log out. Now exit the app. When you open it again, Smart Lock should automatically log in with the password saved from your phone. (If this isn't working for you, try clearing the app's data in Settings.) 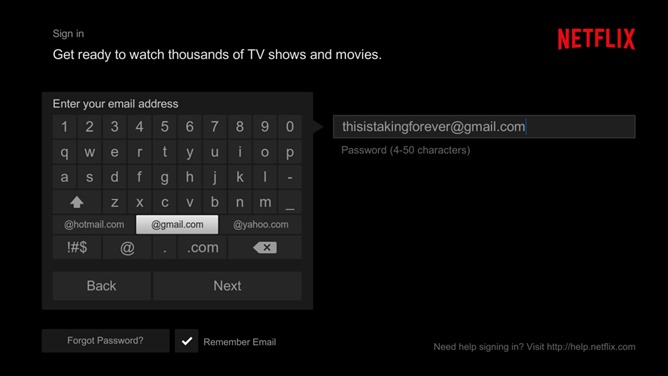 This is particularly handy for Netflix, since inputting the username and password in the Netflix app still doesn't support keyboard input from the Android TV Remote app on phones. (The Netflix app also doesn't support Android TV's universal media search or homescreen display, while we're complaining.) Hopefully this is a sign that Netflix is taking usability more seriously on Android TV. The only other changes in this update are bug fixes and "optimizations fro Android 6.0." [Weekend Poll] What Kind Of Headphones Do You Use With Your Smartphone? Wired? Wireless?