T-Mobile CEO John Legere gets away with the bombastic attitude and casual swearing largely because people like what T-Mobile has been doing. However, it looks like John might have miscalculated with Binge On. Following the video defense he posted earlier today, Legere started doing an impromptu Q&A on Twitter. He made the mistake of asking, "Who the fuck are you?" of the EFF. Now, the internet is letting him know.

It seems unlikely that Legere literally didn't know who the EFF was. He later said that he did know the EFF, so I suppose the intended sentiment was "who do you think you are?" Still, the damage was done. The EFF has a post up on its site (and a tweet) asking its supporters to kindly enlighten the T-Mobile CEO.

T-Mobile's CEO is dying to know who EFF is. Friends, please tweet at @JohnLegere with the hashtag #WeAreEFF to enlighten him.

There's a hashtag for #WeAreEFF that people are basically using to troll John Legere, who I assume is having a good stiff drink right now. He's talking smack to our friends from AC as well. He even went so far as to dredge up an old PC Mag article that asks a lot of leading questions about the EFF's connection to Google. It's clear he just isn't used to being on the losing side of an argument. Also, Verizon's social team is on-deck to mop up. 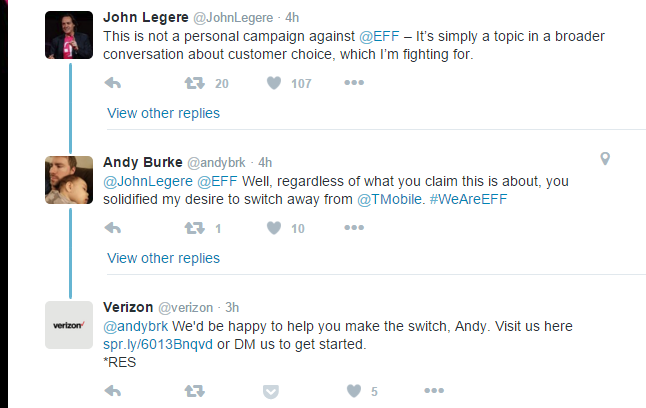 This whole thing is (in my opinion) making him look rather out of touch. He insists we should be happy about Binge On, but people don't seem happy. I'm sure people like the idea of unmetered Netflix streaming, but maybe not so much when it comes with throttling of all video—call it what it is. Assuming the EFF's analysis of Binge On is accurate, this is a violation of net neutrality. 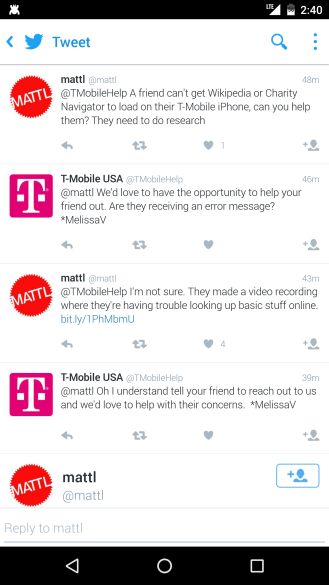 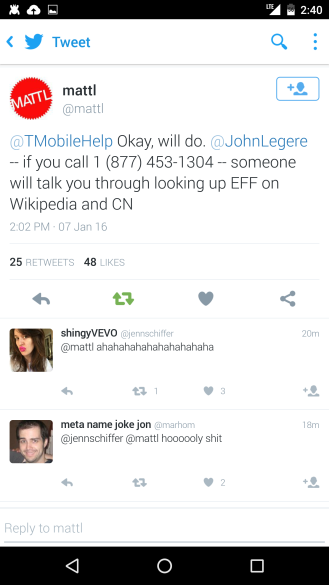 We sometimes forget that T-Mobile is still a carrier—it's a for-profit company that wants to maximize profits. When Legere keeps insisting Binge On is universally positive for consumers, he just comes off as dishonest and cynical. This whole thing might have been avoided if Binge On was opt-in instead of opt-out.

Lenovo Will Retire The Motorola Brand In Favor Of Just 'Moto'

BlackBerry Says It's Done With Its Home-Grown BlackBerry OS - All 2016 Products Will Use ...