The Pocket VR, as it's so accurately named, is basically the same thing as a Google Cardboard unit, but made out of plastic (minus the lenses) and collapsible. The plastic arms and a little bungee cord hold your phone in place, while the interior plate pops out to form a viewer. It isn't enclosed like most VR headsets (so it might not work in bright rooms or sunshine), but in all other respects, it's more or less the same - and Speck says that it's certified to work with Cardboard apps. 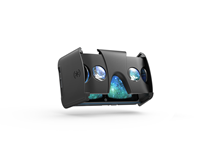 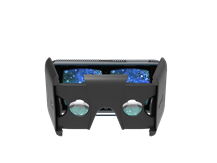 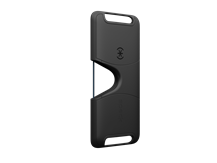 There are a few downers for this nifty little product. One, it's not slated to launch until "spring," which means we're probably looking at 2-4 months of waiting at least. Two, though the Pocket VR looks like it doubles as a phone case, it doesn't - Speck will be selling it bundled with a CandyShell Grip case, which the Pocket VR clips around when not in use. That also brings the retail price up to $69.95, a doozy for something as "cheap" as Cardboard. And lastly, at the moment Speck has only announced that it will be making the Pocket VR and case bundle for the Galaxy S6 and the iPhone 6/6s. That means that the majority of Android users aren't going to get in on the portable VR fun, at least for the initial launch.

LAS VEGAS - (January 6, 2016) - At CES 2016 Speck unveiled their first pocket-friendly virtual reality viewer to give consumers a quick and easy VR experience with a compact and collapsible design. Not only will users be able to enjoy VR experiences from the convenience of their smartphone, they’ll receive the added benefit of Speck’s military-grade protective CandyShell Grip smartphone case, which is included with the viewer.

Pocket VR is a Google Cardboard-certified viewer created by the award-winning Speck design team. When opened, Pocket VR and its precision-crafted lenses provide a rich viewing experience for 3D content, virtual reality, and augmented reality. When closed, retractable side panels fold into a perfectly flat, self-contained package that shields lenses from dust and scratches, and slides easily into a pocket or purse for on-the-go accessibility.

Speck’s best-selling CandyShell Grip smartphone case is the perfect companion to Pocket VR, which securely grips onto the case when in use. When not in use, the viewer can be easily stowed while CandyShell Grip will continue to provide smartphones with military-grade protection against everyday bumps and drops.

Pocket VR with CandyShell Grip will be available in Spring 2016 for iPhone 6s/6 and Galaxy S6. The VR viewer and phone case will be sold together as a bundled package for $69.95. Media can visit the Speck booth at CES for a customized Pocket VR demonstration. Find Speck in the North Hall at Booth #4506.

Team 17 Gives Its Core Franchise A Mobile Makeover With Worms 4, Now In The Play Store

Huawei Mate 8 First Impressions: Big, Fast, And Powerful, But A UI Layer Only A Mother Could Love