And you thought the Galaxy Note 5 series was big enough! And you were convinced HTC had gigantic bezels! Samsung just surpassed your wildest imaginations. This new touchscreen / phone / thingamajig that you see above is not only humongous, it's also embedded inside a fridge. Talk about bezels, ha!

We're kidding here, obviously, and there is a point to having a smart screen inside your kitchen, whether it's to prepare your grocery list, write down bulletin-style post-its, and even listen to music while you chop all those onions and grate all that cheese. Or eat all the ice cream, sitting on the floor, tears streaming down your cheeks... we've all been there. 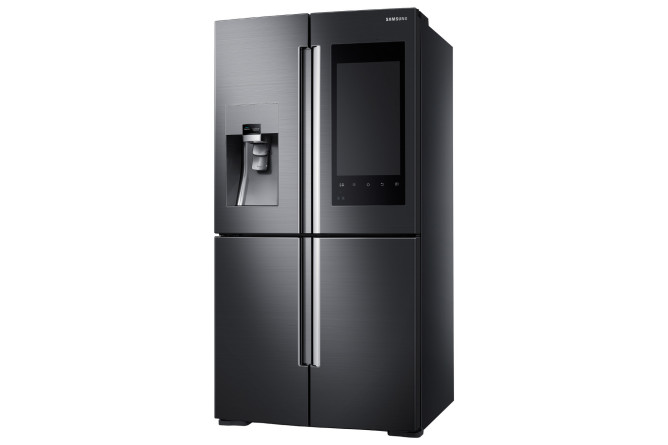 The funniest thing about this connected screen contraption is that it looks eerily similar to the Motorola DROID of years past. Those icons on the bottom... I think we all remember seeing them on many a phone from the 2009 - 2010 era. As for whether or not the fridge runs Android, we're not sure. Samsung's press images that were posted on the company's Flickr account don't show the screen turned on. However, banners from the CES hallway were spotted with what appears to be a unique interface made especially for the fridge. It could still be based on Android or Tizen though, but we won't know until it's official.

Archos Unveils Two New Low-End Lines, Power And Cobalt, And Gets Them Going With Two New Phones Each