When I'm browsing a comments section on Reddit on the Android version of Chrome, I prefer to open links in a new tab, because opening them directly will make the current page "forget" which threads I've already minimized. But when the links are to a YouTube video, they open in a tab with the mobile version of YouTube, instead of in the dedicated Android app. This little app fixes that: Open Link With allows you to open a web page with any compatible app. It's perfect for quickly switching over to YouTube for that link I opened wrong, or for opening a page in an alternate browser that isn't set to the Android default. 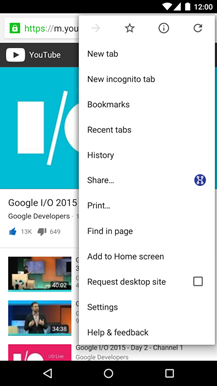 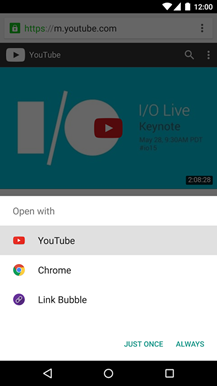 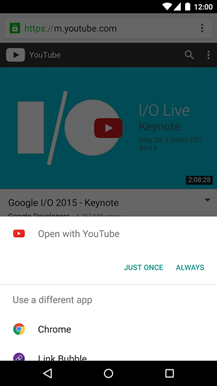 If that seems similar to Flashify (which also allows users to quickly switch browsers without resetting defaults, specifically to open Flash videos in something like Firefox), that's because it is. But Open Link With works with more apps - for example, you can share directly from the YouTube app to go back to the browser, if for some reason you want to. Flashify also seems to be having some problems as of late, especially on Marshmallow. You can also directly open text with a linked URL in another app by highlighting it and selecting "Open With."

Open Link With works in the same way as Flashify: from the page or app you want to open with an alternate app, tap the "Share" button, then tap "Open Link With." You'll then see a small window that allows you to engage any compatible app, including the option to set it as the "default" for Open Link With (but not Android itself). Preferred apps can be assigned and reset by manually opening Open Link With from the app drawer. This little tool might not be all that useful for every Android user, but those who have a use for it will love it. 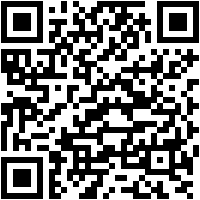