Google is making good on its promise to release monthly security patches to the Android Open Source Project that fix some issues and patch up potential vulnerabilities to the system. Now that we've turned the calendar to a new month, the corresponding updates should be almost upon us and indeed, we've spotted a few hints of them online.

On its support pages for the Nexus 5, Sprint mentions that the latest software version is MMB29S, released January 4th (ie today). Verizon has the same build on its update page for the Nexus 6, and build MMB29O for the Nexus 7. Both are based on Android 6.0.1 so don't expect a lot of significant changes in these versions. It's possible that other Nexus variants will have a couple of different build numbers somewhere in the alphabetical middle between O and S.

The factory images aren't live yet, but based on Sprint's date for the release, we expect these builds to start rolling out today, Monday January 4th. We'll let you know when the factory images, OTA updates, AOSP source code, and monthly security bulletin start making an appearance and we'll know more about the changes by then.

The factory images are up

The security-related details of this month's update are up. Included are fixes for 5 critical, 2 high, and 5 moderate severity issues. It's possible that there are further bug fixes that aren't related to security, but we'll have to wait for the AOSP code push to confirm. 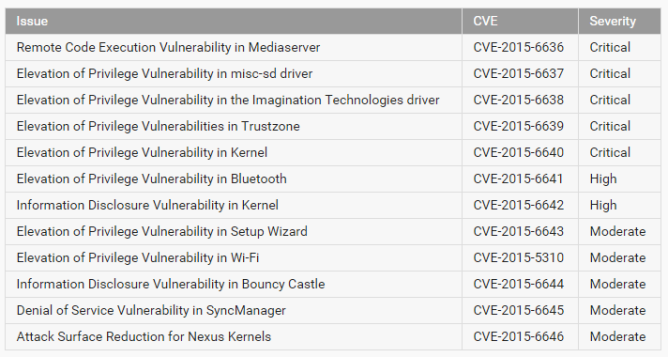