Blown Away is an interesting little platforming game. The chief mechanic is a quick teleporting move - zapping from spot to spot basically replaces the main character's jump move, and creates some interesting puzzles and progression. That alone would be enough to give Blown Away a look, but the hand-drawn 2D graphics are also charming.

Hendrik is a schlimazel. One last hair on his head, and a pair of teleporting shoes, are all he has left. Everything else was blown away by the wind. Let yourself get carried away and and find the scattered remains of Hendrik’s house. Charge your batteries and teleport Hendrik through the ever-moving levels.

• visit 120 levels/stages in four different worlds
• teleport over chasms, past obstacles and through walls
• collect all parts of the lost house and find out the secret behind the wind
• Upgrades. Throught the game, you will enhance your abilities and new gameplay possibilities will emerge
• fair trade. Try the first 30 stages for free and buy the whole package, if you had fun teleporting 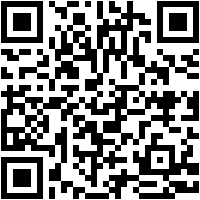 Cavernaut tasks the player with piloting a spaceship in Asteroids fashion, but with the addition of gravity, through a series of otherworldly caverns. Extra equipment and upgrades make the ship more capable, but the greatest challenge is the various obstacles that litter the silhouetted landscape. The difficulty level is pretty high in this one, so consider yourself warned.

Cavernaut is a cave flyer with its roots in classic arcade titles like Lunar Lander, reinvented for the iPhone and iPad: You steer your ship with simple touch and tilt controls through a cave that is randomly generated for every game. Each time you play, there's a new path through the caves, and all the items and landing pads are in different places. 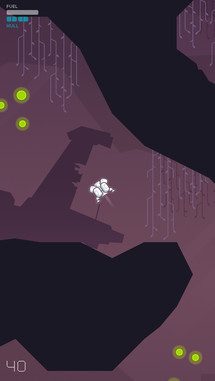 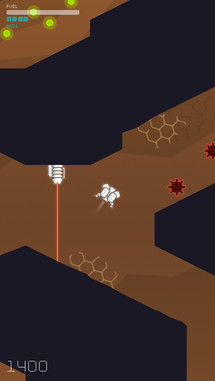 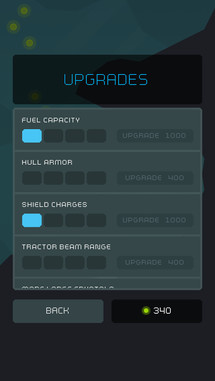 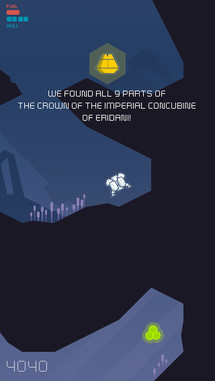 Have you ever played Simon Says? Don't Screw Up is very much like that game, only electronic and condescending. Simply do what it says on the screen in the short time you're allotted, and you're advanced to the next low-thought task. Mess up, and the round is over, complete with an insulting Facebook-grade image and a half-hearted offer to share your shame.

WARNING: This game could insult your intelligence, providing you have some. Want to play nasty or want to play nice? It’s your choice. I’m just the moderator, a real sweet-pea, an occasionally cranky game-minder, a vicious, teeth-baring attack-dog… neatly rolled into one. The rules of engagement are simple. I tell you to ‘tap’ and you ‘tap’ your screen. 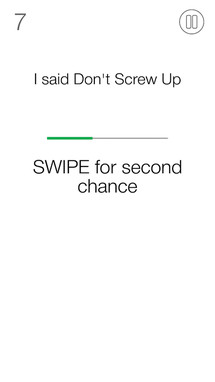 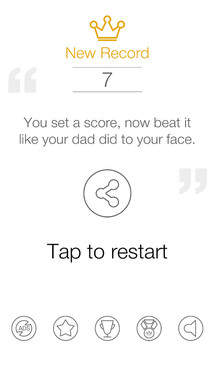 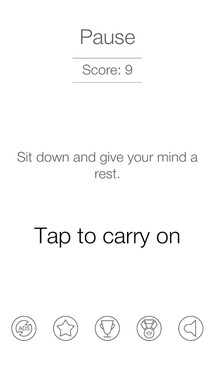 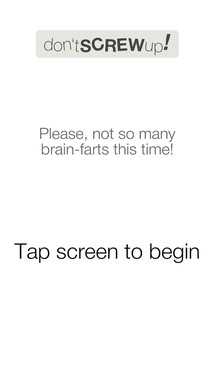 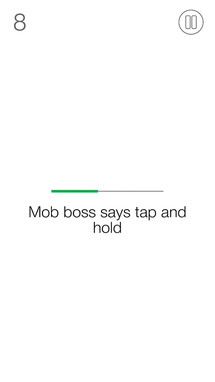 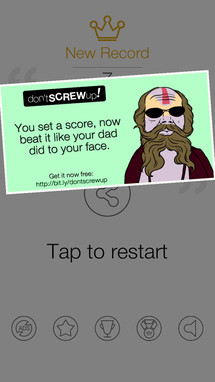 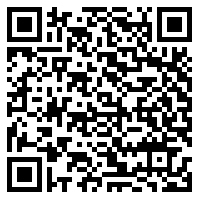 Spin-circle is an "avoider" twitch game. The only objective is to avoid the various projectiles, but the player can only run along the circular track, either left or right. It's a bit like a 360-degree version of dodgeball. If you stay in the same spot for more than a few seconds, the Blue Shell from Mario Kart comes to claim you.

Spin and dodge. Spin around the circle and avoid oncoming projectiles. Red and blue squares shoot in from the outside, bouncing off the inside square. Move clockwise or anti-clockwise around your circle to dodge them, collecting points and increasing your score. Collect your points quick though, as they will disappear. Space Jet is a space shooter in the vein of Wing Commander, but it's structured more like an online shooter - players are dropped into a lobby with a dozen or so others and instructed to duke it out. The game's controls are simple but effective, and winnings can be applied to new ships and upgrades. Unfortunately the free-to-play nature is a real downer; premium currency can even be spent to respawn faster. Boo.

An online 3D space shooter. Space has never been so close. Join a global online space war, face with everyone or join with your friends and create a team. Complete simple daily tasks and earn game currency by taking part in battles. 20 unique battle machines are waiting for you in the store. Unlock and upgrade them all. Star Chindy mixes ground and vehicle combat in a space-faring RPG. Despite the one-life-to-live roguelike setup, the story spans across five chapters, so you'll need to get a solid handle on the turn-based ground combat and real-time vehicle combat if you want to see it through. Graphics and visual design are impressive, especially from a rookie developer, and a wide variety of ship and personal equipment keeps things interesting. There are no ads or in-app purchases.

Star Chindy is a Sci-Fi Roguelike that offers ship-to-ship battle and tactical squad combat. The year is 2315. Mankind encounters a mechanical alien species called the Mechrons. This highly advanced species decimates the humans. However, on the brink of total annihilation, they mysteriously vanish from the system. To investigate and eliminate the threat, an organization called the Star League is formed. You are the decorated war hero, Chindy Ashford. Your mission is to search and destroy the Mechrons at all cost. There's only so much stuff you can add to Snake, that super-simple game that was included on every black-and-white Nokia phone. But putting it on a cube, and thereby increasing the number of play surfaces by five, is an interesting twist. Cube Worm adds power-ups and modifiers to mix up the action.

Meet Cube Worm - the classic snake game experience with a twist of a cube. You thought feeding your worm and avoiding obstacles was hard enough? Try that on a cube that is constantly spinning and can take your worm out of sight. Was it hard to realize whether to turn left or right? Try that with your head down. Cube Worm will test your patience and space orientation to the max. Can you grow your worm to a decent length? Fillz is a fairly straightforward puzzle game that asks players to fill in specific sections of a grid with pre-determined block patterns. It's kind of like Tetris without the falling. There isn't much else to it, but it's free with only a $2 in-app purchase to remove advertising.

Select tiles and drag and drop them to the highlighted target cells. You can select multiple adjacent tiles and move them together in their original positions. Find the right combinations to solve the puzzles in as few moves as possible. New mechanics are added as level sets are unlocked. 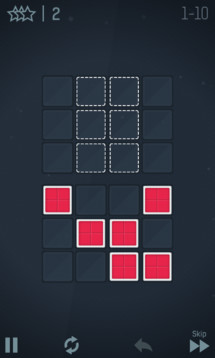 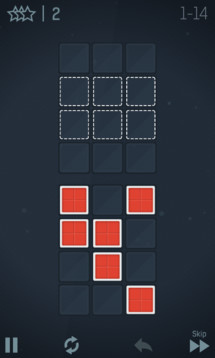 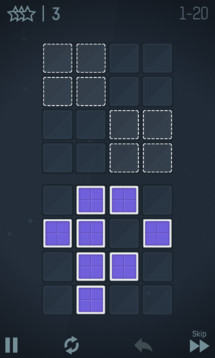 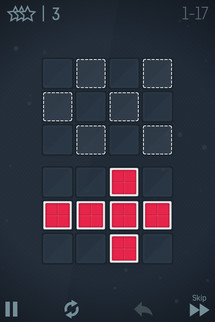 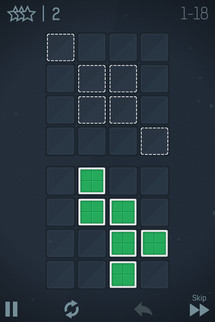 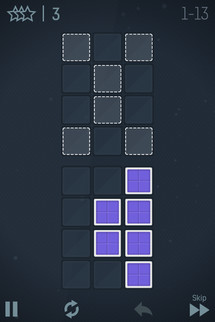 Atlantic Fleet is a World War 2 naval strategy game that tries to be as accurate as possible. The full game was already available on the Play Store (with no ads or in-app purchases), but if you want to try it out first, here's a free demo version.

No Ads. No In Apps. No Pay-to-Progress. When you buy the full version: One Price = Full Game. Play the first 10 levels of both the Allied and Axis campaigns, 3 on 3 single battles with ships up to the Light Cruiser Class, 3 historical battles and the opening months of the dynamic campaign. See if you like it, see if it runs well on your device and if so, upgrade to the full featured paid version (sold separately). 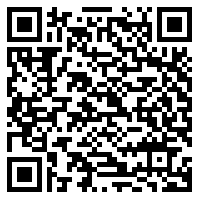 The Talos Principle is a 3D puzzle game with a first-person shooter setup. It made a splash on the SHILED Tablet and the Nexus 9 when it first came out for Android, and aside from the SHIELD TV, those are the only devices it's compatible with. The first version allowed players to pay for the game a chapter at a time, but this expensive release contains the whole game.

The Talos Principle is a first-person puzzle game in the tradition of philosophical science fiction. Made by Croteam, the creators of Serious Sam, and written by Tom Jubert (FTL, The Swapper) and Jonas Kyratzes (The Sea Will Claim Everything). One of the most critically acclaimed PC games in 2014, The Talos Principle is now available on select Android devices. Activision re-released an older mobile shooter based on its Call of Duty franchise with a new Play Store listing. For some reason. The new listing doesn't appear to have any noticeable differences from the older one... aside from the fact that players' pricey in-app purchases have now been reset.

The Call of Duty: Zombies phenomenon has risen back to life. Adapted from the best-selling console hit and built specifically for tablets and smartphones, Call of Duty: Black Ops Zombies delivers fan-favorite, heart-pounding maps: Kino Der Toten, Ascension, and Call of the Dead: Director’s Cut, as well as “Dead-Ops Arcade,” a 50-level zombie gauntlet that provides the ultimate undead challenge for fans of Call of Duty’s signature zombie warfare.