This is where things start to get complicated. Strictly speaking, open source code can't be "stolen" in the classical sense - it's available for all to see, implement, and modify. A more common accusation is that developers take open source code and incorporate it into their own software without attributing the original creator or team of developers... and that isn't what's going on here, either. The Android-x86 developers are accusing Console OS of being generally disingenuous, performing tiny and essentially meaningless changes to Android-x86's code base and presenting it to Console OS customers as something new and worthwhile.

Let's back up a bit. Console OS is an Android fork that got its start on Kickstarter, promising a "non-sucky" Android experience on desktop PCs, as Ryan wrote over a year and a half ago. (For something similar, but actually finished, check out our recent review of the Remix Mini Android-powered desktop gadget.) The gist is that Console OS intended to create a version of Android that would run on standard desktop hardware - the same Intel x86 and x64 guts inside your desktop or laptop computer. Now, this is already technically possible thanks to the Android-x86 project, but the Console OS team and its founder Christopher Price intended to make a system that was easier for both traditional desktop users and software developers to work on.

On its Kickstarter page, Console OS openly compared itself to Android-x86 and similar Android-on-desktop solutions like Bluestacks. The team promised new features like a multitasking windows system, a consumer-friendly design, full Google Play Store integration, and a desktop-friendly mouse and keyboard interface. Price also said in the Kickstarter video, "We're going to give back to that community and contribute to the open source project." 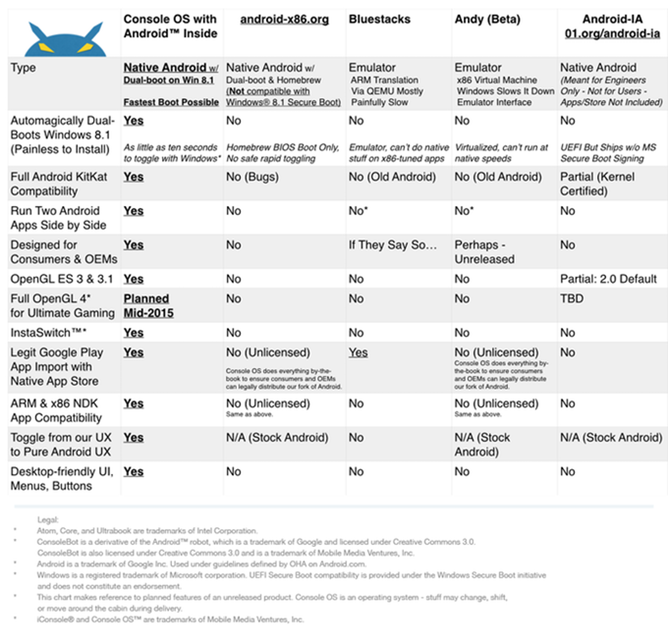 That was in the summer of 2014. Fast forward to earlier this month, and Console OS backers were beginning to get impatient. Though the project raised over $75,000 in its successful crowdfunding campaign, version 1.0 of the Android fork is now overdue by a year. At least one developer build for some targeted consumer hardware has been made available, based almost entirely on Intel's own Android-on-the-desktop project, Android-IA. Due to complexities arising after Intel suspended support for Android-IA, the Console OS team decided to switch over to Android-x86 as a code base for the project as they graduated to Android 5.0 builds and beyond. This is where they've run afoul of Android-x86 developers.

So far, the Console OS team has posted only one notable thing to GitHub, their first release of Android 5.1-based software. When Android-x86 team members took a look at that code, they found that the only change was an adjustment of the name of the project from "Android-x86" to "Console OS," with no concrete changes to the functional portion of the code whatsoever. This has spurred Android-x86's primary organizer Chih-Wei Huang to write a lengthy condemnation of Console OS and its team on a Google Groups page. Among other accusations, Huang said that Price was "cheating his backers" by essentially copying Android-x86 without any meaningful changes and presenting it as some improvement, all the while disparaging Android-x86 on the original Kickstarter page, which is still live.

The code can't lie. Except the two commits listed above you couldn't find any commit made by the Console OS. There is no any feature developed by them. Christopher Price continues cheating his backers and all others that "his team" is developing an OS which is much better than other competitors (including android-x86).

Again, it's important to note that due to the open source nature of both AOSP and Android x86, there's nothing illegal about copying the code wholesale, or even charging money for it. But the minimal contributions that Console OS has made back to the Android-x86 project, as well as the general attitude of innovation that is, at least at the moment, largely unsubstantiated, leaves a bad taste in Android-x86 supporters' mouths.

The drama doesn't end there. After Huang's post started to gain attention both on the Google Group it originated from and more general Android communities like XDA and Reddit, Console OS posted a public update to its Kickstarter page (unsigned, but presumably written or at least approved by Christopher Price). The post said that the Console team had reached out to the Android-x86 project, specifically Huang, in order to form a collaboration.

Console OS claims that Huang demanded a $50,000 donation to the Android-x86 project in order for the two to cooperate. A PDF of an email between Price and Huang, dated November 4th of this year, was given as evidence. Only two messages in an apparently longer chain are shown.

Mr. Huang, unfortunately, demanded we pay him $50,000 in order to contribute and cooperate (PDF) with the Android-x86.org project. This is an underhanded effort with the undercurrent of a threat. What happens if we didn’t pay him? We respectfully declined, and decided to move ahead... The freedom to fork, is one that should not be infringed upon. Demanding money to collaborate on open-source contributions, or to even review code commits for inclusion, is absurd.

Console OS/Pike claims that Huang's demand is a "shakedown," and makes other disparaging comments in the Kickstarter update while promising continued work on the Console OS fork. The feeling among Android open source enthusiasts seems to be very much against Console OS due to the team's lack of meaningful progress, using either Android-IA or Android-x86 as a code base, though Console OS has its supporters as well.

At this point the parties seem to be in something of a stalemate. There's no way for Android-x86 developers to stop Console OS from using their publicly-available code. But without direct cooperation, Console OS will find it much harder to deliver what it promised to its paying customers, and they'll be forced to work on significant updates only as they become available from Android-x86. At this point, the only way for Console OS to silence its critics will be to deliver.